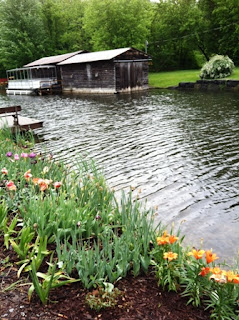 On a recent visit to relatives in Syracuse, I took a walk down the towpath of the Erie Canal. I don’t think I’d ever seen the canal before, though I’ve been singing about it most of my life and read about it in historical novels. The first song I learned was in the classic Fireside Book of Folk Songs:
I’ve got a mule, her name is Sal
Fifteen miles on the Erie Canal
She’s a good old worker and a good old pal
Fifteen miles on the Erie Canal
We’ve hauled some barges in our day
Filled with lumber, coal, and hay
And we know every inch of the way
From Albany to Buffalo.

I was probably in my early teens when I learned the other song, which was relatively raunchy for the 1950s.

We were forty miles from Albany
Forget it I never shall
What a terrible time we had that night
On the E-ri-e Canal.

The cook she was a grand old gal
And she wore a ragged dress
We hoisted her upon the pole
As a signal of distress.

The funny thing about the songs is that they’re in the collective unconscious of people over a certain age. When I posted a couple of the photos on Facebook with the tag “Oh, the E-ri-e was a-risin’” people chimed right in, quoting lines from both songs, in the comments.

We visited Lock 50 in Camillus, New York, twenty minutes by car from downtown Syracuse. There’s a small museum that the docent opened especially for us. There you can see photographs of life on the canal in the 19th century, huge coils of hemp towline, and giant containers for kerosene and whale oil, as well as clothing and other memorabilia of the families that lived on the barges. 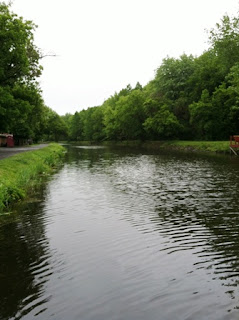 At this time of year (though not in mid-May, when we visited), you can take a cruise down the canal. There are even dinner cruises with live music. The boats are powered by engines, although apparently you can see mules pulling barges at a couple of points on the canal. There’s no active lock at Camillus, but we were told that for supporters of the restoration, it’s a dream they hope will come true some day.

We walked about half a mile in fine misty rain. When the rain got heavier, we turned back instead of going on another half mile to the aqueduct. The towpath is lined with woods where wildflowers were growing, and the area around the museum and lock house were beautifully planted. There are even benches—some donated for the canal’s further restoration in memory of loved ones—where you can sit, contemplate the tranquility, and think yourself back to an earlier time.
Posted by Elizabeth Zelvin at 3:00 AM

My father's parents moved to Syracuse after marrying late in New York City, because they already had relatives there, and more joined them later. Due at least in part to the building of the Erie Canal, there was a large Irish community there. A cousin still owns the family house.

But I've spent little time there, although I do remember my father driving me through the center of town and pointing to the remnants of the canal. I never had the time to visit any local historical sites, but my father was proud to point out that the former university football stadium was one of the earliest such structures built of concrete (he was an engineer).

It's a very pretty town, Sheila, and there's a conservation society that is actively restoring the canal. You can even donate money and get your name on a bench along the towpath.

Beautiful pictures, Liz. I wish the C&O Canal were this picturesque. But it's narrow and shallow, meant only for barges.