Last year it was all an accident.

Years ago, one of my hobbies was making decorative birdhouses, the kind you put on shelves in your house just to perk up a room. In fact, I used to sell them in one of the wineries where I worked in the mid-nineties. (If you ever bought one in a southern California winery, Mount Palomar, look on the bottom to see if I signed it!) I know, can you imagine me, the gal who writes "medieval noir" as a crafty person? Get over your stereotypes! Anyway, I had a few extra birdhouses that I put outside to add interest to our backyard landscape. But last year, a swarm of bees moved in. 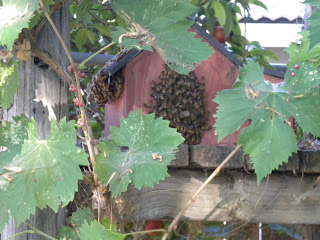 My husband and I are inquisitive sorts and we found this really fascinating. We began wondering how to keep the bees around. I consulted my bee expert who happens to be one of my critique partners, Bobbie Gosnell. She runs a B&B (notice all the “Bs” in this article? Funny, isn’t it?), writes mysteries, and also keeps bees. She gave us some handy tips, and my hubby was off to the garage to build a bee box. Too wary and not equipped with body protection in the way of proper beekeeper clothing, he didn’t molest them and instead left the new box by the birdhouse, which they were quickly busting apart with honeycombs. When the birdhouse proved too small for them, they didn’t pop in next door to the handy dandy bee box made just for them. They left. That stung. 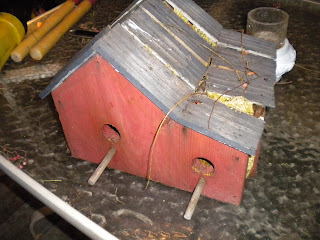 Bummer, we thought. Looking inside of the birdhouse, we examined the amazingly detailed honeycombs, spaced perfectly apart, and harvested only a tiny bit of what remained of the honey. 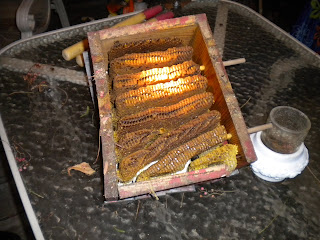 But we left the bee box where it was, stuffing those honeycombs inside so it would smell like a hive, hoping it might entice other bees to show up.

A year later a happy swarm did show. (A little note on terms. A bee swarm is not what you think. It’s simply a collection of bees looking for a place to live after their hive gets too crowded. A queen might lead them or they may have to make a new queen by feeding a female larva an overabundance of royal jelly, a honey bee secretion that comes from their heads, full of enzymes that cause a sterile female worker larvae to develop ovaries. A Queen Bee can produce half a million eggs in her three year lifespan. That’s pretty darned interesting, wouldn’t you agree? And kind of creepy.) 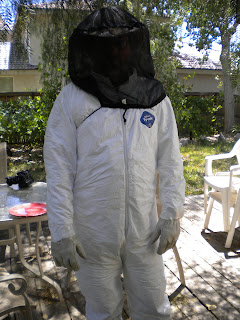 They began making their own honeycombs right away and it wasn't until my husband started reading more that he decided to build a super or another bee box that went on top of the first. That way, you leave all the honey in the box below for the bees and you can harvest the honey on top for yourself. 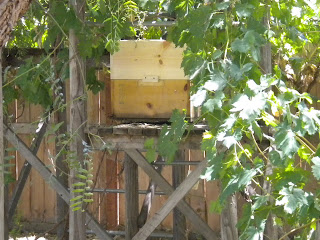 Honey is interesting to us in another way. Years ago when I started writing my medieval mysteries, I wondered aloud to my homebrewing husband (he makes homebrewed beer) if he wouldn’t make me some mead. Mead is an ancient alcoholic drink made of honey, water, and yeast. Sometimes called honey wine, it is really a brewed drink, which puts it in beer-making territory. It’s actually the oldest alcoholic drink there is. Paintings in Egyptian tombs depict beekeeping and mead-making. And in the Middle Ages (ah, you knew that was going to show up) it was a quite popular celebratory drink. Although honey was a valuable commodity. Since sugar was expensive and hard to come by (it came from Arab traders and was sold in hard-packed conical loaves) one raised bees to have something sweet around, not to mention the beeswax which could be sold to churches and monasteries for candles. Even today, real candles in Catholic churches must be of a high percentage of beeswax (originally, it was because beeswax burned with less smoke in such unventilated places). So though mead is far older it gets associated with the medieval and Renaissance periods. I wanted a bit of mead to sip while I wrote my medieval mysteries and he thought he’d give it a shot.

As a consequence, he has become an excellent mead maker, even wins awards at county fairs (and I take full credit for that! We also serve his mead at my book launches. It’s a real hit.) 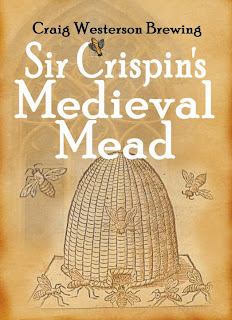 He had to remove the lid of the old bee box in order to attach the super to the top, so armed in his protective gear (and me hiding by the house with the garden hose in my hand in case I had to hose him down) he lifted the lid where some honeycomb stuck to it. We scraped that off, drained the honey out of it, and managed to get a half a jar’s worth of honey just out of a few pieces of honeycomb. Those are some productive creatures!

The super has a porthole where we can peer in and see what they are up to. But I usually give them a wide berth. You can go up to them with no consequences generally, especially when most are gone during the day or they are settling down at night. They’ve got it good, our bees, some 40,000 of them. They get to have a whole box full of honey for themselves, they are sheltered from the heat of the day under a grape arbor, and they’ve got fruit trees, plants, and flowers all around them all year round here in southern California. But we get a lot of enjoyment out of them just watching them work. Yes, hubby’s been stung several times now, but next year we should see the fruits of their labors and have ourselves some homegrown honey.

Posted by Jeri Westerson at 4:22 AM

Fascinating, Jeri. If you ever decide to bring some of that mead and honey to New York, let me know. :) BTW, how did you get the figure of 40,000? Seems to me they'd be awfully hard to count. ;)

I like bees (my father was a beekeeper) and love honey and have thought about keeping a hive in our yard. I'm afraid the neighbors would object though.

Neighbors, smeighbors, Sandy. Besides, bee populations are dwindling due to Colony Collapse Disorder and organic hives are needed (that's the kind that don't feed their bees sugarwater which might diminsh their immune system). And they don't really bother us or the neighbor behind us.

Very interesting Jeri. We had a swarm try to make a hive out of the tepee where the peas were growing. They wisely decided not to stay, but left us a bit of clean honeycomb (no honey) as a souvenir of their visit.

I'd like to have a hive, but there's a school next door and I'd worry about the children. So, I just plant flowers that bees like to visit.

Writer Lady, they only get annoyed if you get close to the hive. So if the school was across the street there would be no problem. Our hive is about five feet from the neighbor's fence and I doubt they ever see any bees. Likewise, the hive is about fifteen feet or so from our patio and we don't get bothered when we are outside having dinner or snacks.

What fun! Close family friends in my childhood were beekeepers, and I've long wanted to keep a hive -- but not while we live in the woods near the bears!

Is that the cover of a book by your husband?

I'm glad to hear about your thriving bees, because the word on bees in general hasn't been so good in the past few years--declining populations, empty hives, etc. So nice to know that a whole bunch of them are in the Westerton's back yard!

No, Julia. I should have said in the post. That is the label I designed for the mead we serve at my book launches. We put them on Jeroboams. Lots of mead!