I had two deadlines converging on August first -- one set of heavy-duty edits, and the first draft of the next Orchard Mystery. I submitted both of them to my editor on time, and now I'm feeling kind of lost.

I don't mind pressure. I was always one of those students who knew exactly how much time I needed to study or write a paper, and I've never missed a deadline. I know there are people who think I'm crazy to take on writing three series concurrently, but I've proven to my editor that I can handle it. It's also something of a relief to have a fixed schedule going forward, so there will be no more logjams like the August one. I hope.

I think it's healthy to step back from writing now and then--to let the voices in your head subside. Of course, we writers are always thinking about what comes next, but it's wise to let your subconscious take over for a while. As a result, this month I've been doing all sorts of catch-up projects that I've been putting off for years--in a couple of cases, even a decade (like recaning a set of chairs--I finished one and a half seats years ago, but there are four of them, and the naked ones sit in the dining room mocking me). Next I may end up sorting my entire collection of print photographs--and I've had a digital camera for a decade now.

You know what? The busywork is simply not enough. I may give myself wise counsel about taking a break, but the next book is demanding to be written. My protagonist keeps popping into my head, and I find myself wondering how she would would do in this or that situation. I guess break time is over. 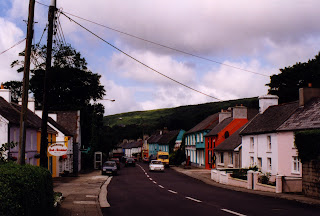 But I know I have to be careful with this one, because it's set in Ireland--in a particular town, population 210 or so. Most of us probably have an internal image of Ireland: lots of green fields; friendly people crowded into pubs, happily singing as they lift a pint of foaming Guinness; rainbows and leprechauns. Of course I've been there--I wouldn't dream of writing a book based solely on some Bord Fáilte (the national tourist board) PR person's idea of what sells in America. But based on what I've seen, a lot of the PR is true: the friendly people who are happy to chat with strangers, the lovely countryside, the slower pace of life in general. Heck, even the rainbows are real (what do you expect with all that rain?). Not the leprechauns, though. I think. I think I may have seen one, but he disappeared before I could investigate. 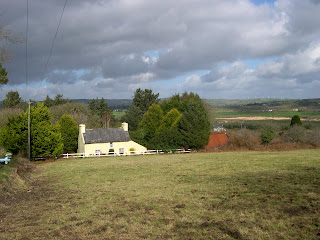 I don't want to write a travelogue. My protagonist, Maura Donovan, is a young woman from the Boston area. She was raised by a hardworking, Irish-born grandmother, but she has never bought into the whole Ould Country thing, and goes to Ireland reluctantly to fulfill her grandmother's wish. She's fully prepared not to like the place. And that's going to make writing about her an interesting balancing act.

In a way the story arc will conform to a genre canon--most likely from the romance side of the fence, substituting a country for that guy with the muscles and the sensitive mouth who shows up in Chapter 2 and gets the girl in Chapter 30. But romance is the last thing Maura is looking for. She has a chip on her shoulder about life in general, and no idea what she wants. But she can and will change, and it's Ireland and the people she meets that will make those changes happen. Not all at once, of course, but at least by the end of the first book she will be warming to the country, just a bit. Not exactly a commitment, but she's opened the door a crack. 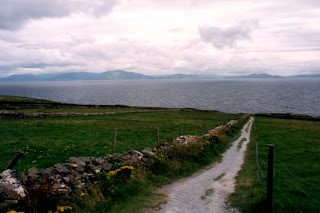 I still have to wrestle with readers' expectations. As I said, most people feel they know Ireland. Do I want to shatter their illusions? But what if those illusions are actually the reality? Will others claim that I'm taking the easy road and trotting out all the trite platitudes? I can see the reviewers' comments now: "reads like a tourist guide."


What's more, Ireland has been through some trying times in the last decade, and I have to take into account that what was written about the place in 2000, in the midst of the Celtic Tiger, may no longer be true. And that makes it even more challenging to write about. If I say that the Irish people have shrugged it off and gone on about their business, would readers believe me? Yet it's only the last installment of centuries of hardships that the Irish have endured.


Still, it's time for me to jump in and try, because Maura is insisting on it. Funny story: when I sent my agent a first draft of the opening chapters, she didn't like Maura; she thought she was too angry, which made her unappealing. I dialed down the anger, but I held on to the distrust: Maura doesn't expect life to hand her any gifts, based on her experience. But she'll come around Ireland will do that to do, because there is some sort of magic there. Really.

Sheila, do you read Maeve Binchy's books? Her Ireland
always strikes me as modern and authentic. Several of her characters are gourmet chefs, and they're always rolling their eyes at Americans' belief that the Irish eat corned beef and cabbage.

Yes, I've read several of Binchy's books, if not the most recent.

I don't think I've ever had corned beef in Ireland, but I have had my fair share of "bacon" and cabbage--the bacon being somewhere between our bacon and ham. But I will say that Irish food, both in stores and in restauarants, has improved dramatically in the past decade.

Anytime I begin a new book I am afraid that I've lost my powers since the last one I wrote. Irrational, yes. Normal, yes. Who said we were rational?

Sheila, I love anything set in Ireland -- from the lightest to the darkest stories (I worship Edna O'Brien) -- and I'm looking forward to your new series.

J.P., you are far from alone. After I finish a book, I'm not sure exactly how I managed to do it, and I'm positive I won't be able to pull it off again. But, you know, Sue Grafton says she has the same feelings. We're in good company.

Amazing photos, Sheila! I get wanderlust just looking at them.

Sheila, write what YOU like. What feels right to you. Your readers will follow. I know I will.

It can't really have effect, I think this way.