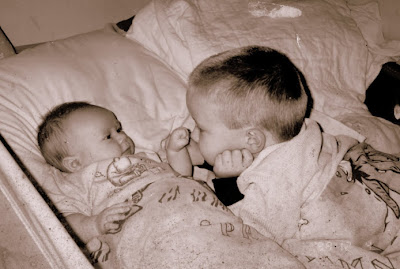 I know that I often write about the passage of time--I suppose because it's a phenomenon that is ever amazing to me.  And if we mark our days by special occasions, then I am approaching my 17th Halloween with children. (That's them, above, when Graham was about five months old and Ian was four).  In the old days they would dress as little jesters or cowboys or, on one splendid Halloween, like Sherlock Holmes and Harry Potter.  And it seemed, year after year, as though those days would never end.  But gradually they stopped dressing up and focused more on being with friends for the big day. 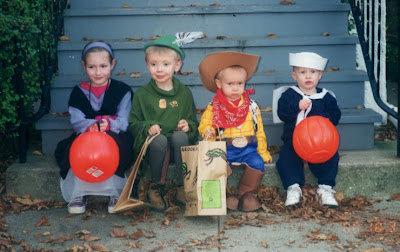 (Ian is Robin Hood and Graham is Woody the Cowboy. Flanking them are their friends Grace and Bennett).

Recently my son Graham celebrated his Confirmation, and his brother served as his sponsor (that's their picture at the practice, below). They looked almost like adults in their black suits, and I was reminded again how time slides elusively by--how our children remind us of ourselves, and how we become like our parents--a river of continuity that defies explanation.

I know that to my children and my students I probably sound like one of those annoying oldsters who is always saying "I remember when you were a baby!"  And I do in fact say things like that all the time--but it's not, I realized, to express regret that young people grow older, but merely to give evidence to the fact that I have existed for a certain amount of time, and I'm seeking to give context to my own life. I was present at the birth of these children, and now I am present as they knock on the door of adulthood.  So what, if anything, have I learned in the interim?

These questions give me pause now and again, as I watch my children out of my own mother's eyes and say some of the exact things she used to say, perhaps for the very reason that she said them.

One of my favorite Robert Frost poems is called "The Passage of Time."  It goes,

"The old dog barks backward
Without looking up.
I can remember
When he was a pup."

It's so simple, but it really says it all, along with another of my favorite Frost poems called "The Secret."

"We all dance round in a ring and suppose;
But the secret sits in the middle and knows."

Frost was a philosopher poet, and I am given to philosophizing more and more as I get older--aren't we all?

What philosophical questions have you been asking lately?  What proofs of time have amazed you?
Posted by Julia Buckley at 12:00 AM

Julia, I am constantly amazed by the way technology has changed all our lives, in both large and small ways we could not have imagined even 20 years ago. And I can't get used to remembering events and people from 40 years ago and realizing that I was already an adult then.

When we talk about the passage of time, the subtext is always about the *end* of our time as living beings. The inevitability of death is one thing I have never been able to fully accept. I thought I would accept it when I was older. Now I'm older and the thought of death is still a shock to me. I thought writing about death would help me accept it, but that hasn't worked either.

I agree, Sandra. It's something I too think about more and more, in light not only of the decline and death of people I know and love, but because the literature I teach every year is so focused on death.

And I'm with you on the technology thing--too much to wrap your head around sometimes.