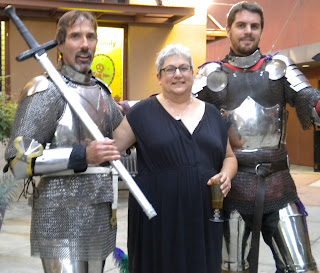 To tell you the truth, I don't know what other people do. I might have seen a book launch or two where the author serves a cake or it's a cocktail party sort of an affair. But no. Not me. I always wanted my book launches to have the same dramatic flair as my books, and get the reader in the mood. 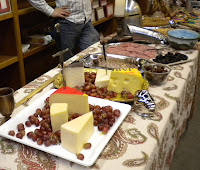 And I think I did that adequately when I launched the fifth book in my medieval mystery series, BLOOD LANCE, on October 20th. Since my books are set in the middle ages, the first order of business was to make sure I served medieval food. Now I'm not talking a full course dinner, but more like medieval munchies, finger food, but something that wouldn't look unfamiliar on an English medieval table. And so I serve figs and olives and grapes. And cheese. Lots of cheese. Along with small bits of toast (i.e. crackers) to go with it. But any medieval table involves meat, and so that's there, too. Salami, and pork tenderloin stuffed with prunes.


Libations are in order, and along with the decidedly not medieval champagne (we have to make some concessions), we also serve my husband's award-winning homemade mead. It was a real hit, I can tell you. Many people have never had mead and my hubby knows how to brew it. It beat the champagne hands down, as a matter of fact.

Food helps to conjure the right atmosphere, but there is nothing like a little entertainment to get the ball rolling. In previous years I had the help of a cousin who plays a Celtic harp. But along with that, I always have my knights. Armored fellows who take time away from their other knightly duties to add verisimilitude to the proceedings by dueling and offering me and my guests a chance to get medieval on things.

And then I did a reading, and to accompany that, a brief Power Point presentation on the Origins of Knighthood with pictures of yours truly all armored up for the sake of research.

It's an unusual knight...er...night. When I did it for my first book, VEIL OF LIES, five years ago, the folks at Vroman's bookstore--the oldest continuously running indie bookstore in America--said they'd never seen a launch like that. And I don't feel I can disappoint.

But sometimes...sometimes I wish I just served cake.

If you could get the guy who poses as Crispin for your covers to come to a launch, I might be willing to travel cross-country for it. :-)

It all sounds fantastic and irresistible.

"But sometimes...sometimes I wish I just served cake."

Then you wouldn't leave your fans with a great big grin on their faces, looking at that photograph of you with those two knightly bookends, and reading about the lordly feast you offered.

Although, of course, mediaeval cakes could be rather impressive, too.

I regret that, like Sandra, I live in entirely the wrong place ... --Mario R.

Having been a long-time member of the Society for Creative Anachronism, boy do those two guys with you look familiar.

I forget that not everybody routinely visits the middle ages and takes that as a normal and natural thing to do.

Congrats on the launch.

This sounds like an amazing signing but a lot of work for you. Where do you get your swordsmen--Knights R Us?

Sounds like a fantastic party! And quite honestly, I don't see why you can't have your cake and get medieval on it, too.

I know, Sharon, I'm there all the time!

Julia, I found my knights from local sources. The local SCA people are always too busy with a war to come to my aid, but with the places I hang out, I meet them. These guys with the plate armor are new this year to my launches, but they've been around, offering "Knight School" and sword craft lessons as well as a nifty podcast www.ChivalryToday.com.

Sandy, the guy on the cover--Wes--is busy finishing up school in Oregon and I wish him good luck!