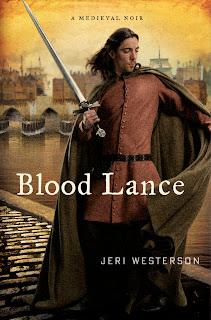 With our young soldiers marching off to war all around us and returning home with not only visible injuries, but the many you can’t see, I began to consider Post-Traumatic Stress Disorder, or PTSD, as it was viewed in the past. And it became a pivotal plot point in my upcoming book BLOOD LANCE, my medieval mystery with protagonist Crispin Guest, a disgraced knight turned detective in fourteenth century London. A knight from Crispin’s chivalric past, Sir Thomas Saunfayl, pulls Crispin into his difficulties that are quickly spiraling out of control. Sir Thomas is accused of desertion and must fight for his life in a judicial joust. Desperate to ensure his victory, he has paid a fortune to lay his hands on the Spear of Longinus, a religious relic he believes will give him invincibility on the lists, and he hires Crispin to find it.

The idea of knights possibly suffering from PTSD fascinated me. I wondered if throughout history, in the days before modern artillery, combatants suffered from it. After all, it is a malady that manifests once a soldier returns home to “normal” life, and many soldiers and knights were away from home for years and years. Even though there is little in the way of discussion about it in old documents because of the cultural and sociological differences between then and now, I didn’t suppose it was a modern phenomenon, though we have given it fancy modern names.

In World War I, they talked of being “shell shocked” from the nature of the new style of warfare where soldiers huddled in trenches while being barraged by exploding shells. By World War II it was called “battle fatigue.” General Patton famously slapped a soldier suffering from this. “Battlefield stress” is yet another term.

But in the Middle Ages it could only be recognized as a failure on the part of the soldier and labeled as cowardice. Interestingly enough, some parchment was given to the problem of cowardice. The idea--then as now--was to train the soldier so thoroughly that the “flight” part of the natural “fight or flight” response would be eliminated. Drill, discipline, and group bonding went a long way toward shaping the mind (though the medieval foot soldier wasn’t drilled in the sense of practicing formations, not like their ancient ancestors in Greece or Rome. It was an impracticality. They had to rely on the discipline of the knights, those in the front lines, to form strategies for the foot soldiers to follow. However, infantry was able to save the day over the mounted knight many a time, including in the battle of Courtrai in 1302 and Bannockburn in 1314).

Instilling a greater fear in one’s commander than in the enemy also proved optimal. In ancient China, for example, generals would maneuver their armies in such a way as to make retreat impossible thus forcing the advance as the only option. Religious fervor, too, offered a standard under which one could fight while also offering ultimate rewards if death should strike.

There was a reason for rallying the troops before a battle with a stirring speech. From ancient Greece and probably before, generals and kings gave battle orations meant to bond, to encourage, and to remind the men of their reasons for fighting and for their ultimate rewards if they succeeded. Think of the St. Crispin's Day speech in Shakespeare’s Henry V. I don’t know about you, but it makes me want to take up arms!

Combined, this is what made up the “band of brothers,” where even the general or, in some instances, the castellan of a fortress, feels close to his men in a way that defies the social classes.

Still, even with all this training and discipline, with the subsequent shame in society associated with cowardice, there were certainly soldiers and knights who succumbed to the rigors of war. A knight on a horse could flee a lot easier than a man on the ground, and there were instances where generals insisted the knights dismount in order to make fleeing more difficult. Early flight of the knights lost many a battle, including King Stephen’s battle at Lincoln and Robert Curthose’s battle at Tinchebrai. Are these instances of cowardice as we might understand it, or of a man cutting his losses and getting the heck out of there?

Battle stress manifests itself in running away in the face of battle, sleeplessness, irritability, irrational anger, mood swings, and thoughts of suicide. Sir Thomas in this piece suffers from these symptoms and can’t understand why. All his training and discipline failed him in the face of the constant barrage of the battle royale. What’s a knight to do? As he said, they can’t all be Crispin Guests.
-----
My new medieval mystery BLOOD LANCE will be released Oct 16 in hardcover, e-book, and audiobook. See a series book trailer and discussion guides for all my books at www.JeriWesterson.com

It is an article about PTSD in history, which includes Greece in the 5th Century B.C. and England in the 11th Century. It also points out non-battle cases, such as the Great London Fire of 1666 and various train wrecks.

Fascinating, Jeri. We think of the Middle Ages as a time of brutal combat, yet the suffering of our troops in Iraq and Afghanistan has been equally horrific. One difference is that soldiers who have lost limbs and endured terrible wounds are more likely to survive today, so we have more cases of PTSD to deal with. These soldiers deserve every bit of help our government can give them.dsdd

Good post, Jeri. I've read recently, and not for the first time, that a soldier fights, not against the enemy, but for the man (or woman, nowadays and in speculative fiction) next to him. Do you happen to know the source of this? Nowadays, at least we recognize war-induced PTSD when we see it and can provide some help. After World War I, all they did with shell shocked vets was to warehouse them in nursing homes. After Vietnam, it took us twenty years to realize that vets needed psychological help. Of course, a better solution than better care and better meds would be to eliminate wars....

Good post, and, although Crispin continues to function brilliantly, a lot of his sadness, and depression has to do with the losses he has sustained. A wonderful character. And yes, it would be nice if we eliminated wars.

Ooh, 1 L Loyd. Thanks for posting that.

That's probably true, Lil. Crispin is dealing with a great deal of loss. He could use a good analyst. :)

Sandy, you don't have to be wounded to suffer from PTSD, but many who are do.

Great post, Jeri, and a useful citation by Anonymous.

Female veterans frequently have PTSD as a result of rape or sexual harassment (usually by a fellow serviceman).

I think that in the past, many PTSD veterans self-medicated with alcohol or other addictive substances and that masked the underlying disorder when the veteran became belligerent, showed irrational anger, or committed violence.