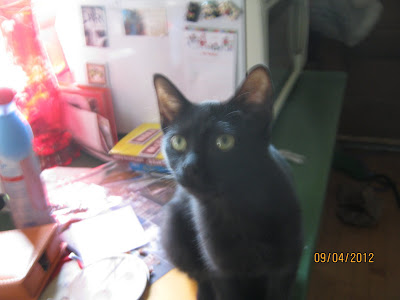 In summer I did a blog about a kitten we adopted and named Panther. I thought I'd update you about the little fellow's progress, since I was worried that our other veteran cats might intimidate him or that he would be lonely in a strange place.

My worry was utterly unnecessary. Panther is not only the dominant cat in the house--often pouncing on even the eldest patriarch without fear of reprisal--he is fearless.  He steals food from other cats and they slink away.  I think they're intimidated by his littleness and energy.  But they play together; at least I think they're playing when Panther chases them all over the house.

If I had concerns that my family would resent my adoption of Panther, our fourth cat, those worries have flown. Panther is the sweetest, friendliest, purriest cat we've ever had. While our previous three spend the day ignoring us and mostly out of sight, Panther stays with us throughout the day, playing or sleeping on our laps. If he thinks my sons aren't playing with him enough, he climbs all over them until they relent and get out his toys.  If they are sleeping and Panther wants them awake, he tries to pull their eyelids open. Like a baby, he enjoys playing with his own feet, and for some reason he likes clasping his head, as if he has a tiny cat headache. 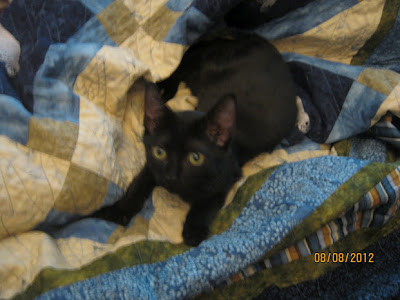 He's pressed against me as I write this, tucked into the chair next to me where he tends to spend each evening.  But he's not just a sleeper. He's always hungry and growing rapidly--we're wondering just how large he'll get.  His sleek blackness allows him to blend into the shadows at night, and sometimes we don't even know he's there until we see his large yellow eyes glowing at us.

I'm looking forward to posing him with a pumpkin in the near future, since he looks like such a Halloween kitty.

In the meantime, I'm feeling that my urge to adopt a kitten from the Animal Care League window was something approaching destiny.  I asked my husband, hypothetically, if we had to give up one of our cats, which it would be.  He said, "Well, it wouldn't be Panther."  :)
Posted by Julia Buckley at 12:00 AM

Kittens do have a tendency to take over a household. Older cats will accept a kitten much more easily than they would another adult and will be energized by the little one's infectious spirit. I hope Panther will prove to be a benevolent dictator. He's adorable.

Thanks, Sandra. The term "benevolent dictator" suits him well! Although he does need to learn to retract his claws. :)

Start clipping those claws routinely NOW, so he'll be used to it. Training him to accept it later will be much harder.

What a wonderful story! Love the picture and the tale! Panther looks like our dear Wilde Oscar who was a rescue kitty, a self rescue -- he found the house he wanted to go into and began his charm offensive. He knows he is hard to see and plays pranks, jumping out at you. I don't scream easily but I sure did the first time he tapped me on the shoulder when I was home alone (except for him).

Oscar doesn't always "remember" to retract his claws either, even at his age.