A Disturbing Trend, or The Status Quo? 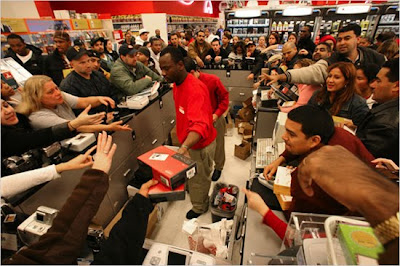 On so-called "Black Friday" this year the media reported several incidents of violence, including one in which a woman pepper-sprayed a crowd waiting for deals at a California Wal-Mart. It is not yet clear why the woman did it, although the assumption at the time was that she wanted "an advantage" in getting a cheap X-box.

Certainly one could look at these store skirmishes and read them as morality tales. At the very least, they suggest something about our society. Yes, we are materialistic; I suppose that's always been an offshoot of our capitalism. But were we always this selfish? Have there always been crazy stories like this, or are we watching a growing trend in self-absorption?

If you vote for B, then you can probably see an example of culture perpetuating culture in the influences all around us. Some of the most popular television icons for young people (the pepper-spraying woman was in her 30s) are the narcissistic Kardashians and the amoral inebriates of Jersey Shore. A recent study by The Girl Scouts of America found that shows like these have a measured negative impact on the behavior of young women (and, I assume, young men), especially in terms of bad language, sexual promiscuity, and a lack of respect for others.
"Everyone surveyed thought reality shows promote bad behavior: 86 percent felt the shows often set people against one another to increase the dramatic value; 73 percent thought reality shows depict fighting as a normal part of a romantic relationship; and 70 percent believed that reality TV leads people to believe it acceptable to mistreat each other."

Another troubling offshoot of the study, according to the Bozell blog link above, was that the young women assumed that all of this "reality tv" was actually REAL and unscripted. Their imitation of it, then, is thought to be organic when in fact it is orchestrated. One of my students admitted to being manipulated by reality tv, but assured me that she wanted to one day be "A mob wife" anyway, because she was simply "obsessed with the show about mob wives." When I suggested that their lives were immoral, she laughed and said that she would be rich. She was, I think, only partly kidding.

In addition, one in four of the survey takers expected to eventually be famous. But in today's world, the distinctions between "fame" and "notoriety" seem less and less clear to young people who might not appreciate the ironies behind nuanced definitions. Fame is fame, and the media panders to those who want their fifteen minutes of it. Talent is obviously not in the equation.

As adults, should we be concerned that our young people are immersed in a media culture of narcissism at a time when they feel particularly narcissistic? Can we blame young people for increasingly gross feats of selfishness when thinking adults make the choices about what goes on the airwaves?

Culture perpetuates culture, they say, and our popular television culture offers little in the way of inspiration and a whole lot in terms of a damaging world view.

However, I may have the short-sightedness of one person looking from only one window of time. Has it always been this way? Am I just taking the curmudgeon's role of castigating youth culture, or is there something destructive at work?

Photo link here.
Posted by Julia Buckley at 12:00 AM

Way back in the 1950s, my mother was convinced that watching Westerns on television would make me violent toward my peers. On the playground we would reenact shows, complete with (imaginary) horses and guns, but as far as I know, none of us was ever involved in a crime.

Which is corroborated by the recent Congressional stalemates, where the participants are more worried about getting reelected than about serving the country and the best interests of its citizens.

Julia, I don't think you're exaggerating. When my son was ten or eleven and into Dungeons & Dragons, there was public or at least media concern about fantasy role-playing games modeling violence and even leading to psychotic breaks. When asked, my son said, "Ma, I know the difference between fantasy and reality!" I'm not so sure that's true of the millions who are fascinated by and aspire to be Kardashians and their ilk.

Julia, your question about whether it's always been this way brought to mind a piece I read last December by psychologist Gretchen Gibbs at zestoforange.com. Gibbs noted that Narcissistic Personality Disorder was about to be dropped as a diagnosis by the American Psychiatric Association. The point she made was that narcissism is now so prevalent in our culture it can no longer be considered an aberrant behavior.
A very sad statement about our society.

Good point, Sheila--that's a whole different (and more disturbing, perhaps) offshoot of our "me" culture.

An important distinction, Liz. And people probably couldn't even agree on a definition of "reality," because we are so immersed, as well, in nonsensical rhetoric as the norm.

Anita--that is so depressing! Wow.

I think "reality" shows are dreadful. I would never allow a child to watch one.

The shopping frenzy, though, is nothing new. I remember hearing stories when I was a kid about women trampling each other to get into big sales at department stores. I never go near a store on big sale days.

Thanks to the Internet, I rarely have to go to a store at all. :)

But I do still enjoy small shops.

Even the small shops are madhouses at Christmas time. The small community I live in has lots and lots of little gift shops, and they're all packed with people during the Christmas season.

There are still times of day here when I can find peace and quiet in a small shop, especially if I do my shopping earlier than the week before Christmas.

When I was a youngster and standing in the way of people getting off the bus, my mother would pull me back and scold me: it wasn't nice to inconvenience other people like that.

Not all that long ago, I saw a child in the doorway of a Metro train; passengers had to manoeuver past her to get on and off. Her mother pulled her back and scolded her: don't stand in the doorway, you might get hurt.

Ever notice how the self-centered lesson is now more frequently heard than the other-centered one of our childhood? Seems so to me, anyway, and it does rather explain a lot if so. I think it's a disturbing trend, not a status quo.
--Mario

Mario, this reminds me of the contrast that I see (as a teacher) in school/parent communications.

When I was a kid, the teacher was always right. Now, it's far more likely that a parent will castigate a teacher than a child, and if the teacher doesn't give satisfaction, they will go right up the line. In some cases, this is over something like a B- over a B+.