Touring: Worth the Price?

Since my newest book, TROUBLED BONES, came out in mid October, I’ve been on the road touring. And I think if I never saw another airport it couldn’t be too soon.

My husband actually looks forward to the early part of the tour that I do in Arizona, because this becomes a long weekend for us both, driving from our home in southern California to cross the deserts and slip over the Colorado River into Arizona. A weekend of sitting around pools with the occasional stint at a bookstore or library doesn't sound too bad.

This year, I asked my publicist at St. Martin’s to set me up on a multi-state tour. They are happy to do that for me. Of course, they don’t actually pay for any of it, they just make the phone calls and set it up. It’s up to me to get there.

Is it worth the time and expense for an author? In this age of social media, can one get away with simply tapping away on the computer to get attention? In order to sell books, an author has to get their name out there. And even with all the Facebooking and Twittering one can do, I believe there comes a time when you still have to step out of your front door and go out into the world, meeting people personally and connecting with librarians and booksellers.

I do events all year. I’m lucky to live in southern California where there seems to be lots of avenues for me to get myself out into the public eye, from the Los Angeles Times Festival of Books to smaller but no less high profile literary gatherings like Literary Orange and luncheons sponsored by various women’s professional organizations, as well as library appearances. And once the word gets out that you’re halfway entertaining, you get recommended all over the place. That’s how I roll these days, through recommendations, through the speaker’s bureau at my Los Angeles chapter of Sisters in Crime, and through my publicist with my publisher.

But that only gets me connected in California. I wanted far more coverage than that and this year, I pulled out the stops—and my credit card—to hit the road. (You can see pictures of my adventures at www.Getting-Medieval.com)

Before any official book tour, I began the year in January with a couple of panels at the ALA Midwinter Conference in San Diego. And then I got invited to Murder on the Menu, a grand panel of authors sponsored by the Cerritos Library in southern California. So far so good. I could drive to these and they required no overnight stay. 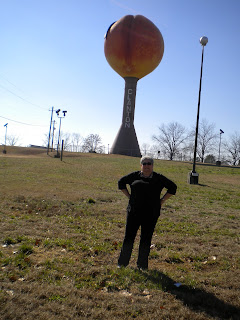 In February, I was invited to Birmingham, Alabama for their weekend of author panels and events in Murder in the Magic City. Now I needed to shell out airfare and hotel. They managed the ferrying around and the meals so that helped. Also in February, I flew up to San Francisco for the day to the Oakland Library to participate on a panel with other mystery authors. Airfare only, as one of my critique partners, Ana Brazil, who lives in the area, offered to drive me around (when I came off the plane she was holding up one of those signs with my name on it, as if she were a limo driver. Funny!)

In April, I hit Literary Orange on a panel with fellow author (and personal idol) Barbara Hambly, and made all sorts of connections with librarians, scoring more gigs for later in the year. There were no fees accrued there and I got a free lunch, too boot. Also in April, San Antonio College invited me to speak as part of their writer’s week (they heard about me through acquaintance with another mystery author). They paid me to be there. That's what I'm talkin' about! At the end of April, I skipped the free LA Times Festival of Books to attend mystery fan convention Malice Domestic in Bethesda, Maryland, where I hosted a banquet table with fans and fans-to-be and also sat on a panel. I paid a conference fee, airfare, hotel, and meals, as well as dosh for giveaways to my tablemates.

I taught a workshop on researching the historical novel at the California Crime Writer’s Conference in Pasadena, for which I only shelled out for the hotel room (which I really got free with my points from Best Western).

In June, I attended and was empaneled at the Historical Novel Society Conference in San Diego 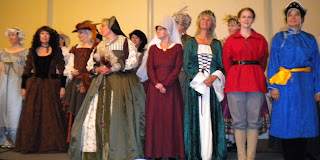 (I paid a conference fee, which they cut in half since I was a speaker, hotel expenses, and gas to get there. Meals were included.)

In September, I went to Bouchercon in St. Louis, moderated one panel, sat on another, was snuck into the Library Breakfast by my publisher, and attended an outside event under my pen name at a local bookstore. In October I was on a panel at the West Hollywood Book Fair as my alter ego, and then began my medieval mystery book tour with my book launch in Pasadena (hotel, meals, and party expenses for the launch, including sword-fighting knights, who don't come cheap!)

The following weekend, my husband and I headed out for the Arizona leg of the tour, which was driv 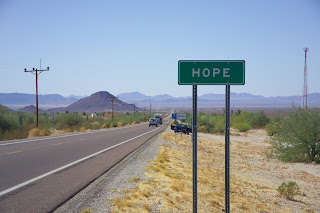 eable (gas, food, lodging). But the weekend after that I was flying out to Texas to hit a bookstore each in Houston and Austin. The next weekend I was in North Carolina hitting two libraries and two bookstores, and this last weekend wrapped things up in Wisconsin having been invited to Murder and Mayhem in Muskego, another weekend full of panels with fourteen other mystery authors.

But this last one in Wisconsin was the only event I attended all year where all expenses were paid for by the sponsors (except that my flight out of Milwaukee was delayed and I missed my connecting flight to California which ended up in an overnight stay in Chicago, which I paid for). Otherwise, I was all in for conference registration fees, hotels, car rentals, gas, airfare, and meals. And let me tell you, all told for the year, that is a very, VERY BIG bill for a midlist author with only four books released (six if you count the others under my pen name). If you think it's glamorous being an author, let me show you my credit card bills.

So, Jeri, are you just going to complain about it or has it been worthwhile? On a human level, it was very worthwhile. Going to meet the readers personally, giving readers face time--and connecting in person to all those Facebook friends--leads to even more loyalty and to talking me up to other readers. Same thing at the bookstores. Sure, I sell a few right then and there, but now you’ve got the bookstore owner on your side, hand selling when a curious and eager reader shows up and just has no idea what to read next.

But how does one quantify it? Do I have to sell X number of books on my tour to pay for it? Does it even work that way? Can it?

The answer, I believe, is not really. It’s truly impossible to quantify how many books I will eventually sell by these out-of-pocket efforts.

Touring is not for everyone. And because of the expense involved, I doubt I will be doing much traveling at all next year (see me and Crispin on Facebook!). But I’m glad I gave it a push this time around. And, as many of the librarians and new fans told me, “You weren’t on my radar before, but you are now!” Maybe that says it all.

(Pictures, from top: Jeri and the Giant Peach outside of Birmingham, AL; the costume parade at the Historical Novel Society Conference; the town called Hope in Arizona I passed through.)

We were so pleased you came to Malice Domestic this year, Jeri, and hope our fans will get the chance to see you again. Perhaps in this upcoming April?

By the way, your tour schedule sounds exhausting and wonderful. I hope that one day I, too, will have the chance to be exhausted. : )

I've found I love giving talks and attending conferences (a big surprise, since I would have called myself shy for most of my life). But I do wish I could borrow a Star Trek transporter to get there and back.

Touring has both pros and cons, and most publishers won't pay for it anymore unless the author is already a bestseller and the tour is aimed at keeping the fans happy. Then there are writers who don't tour at all, and do very few personal appearances, yet make the bestseller lists. We all know several SinC Guppies Chapter members to whom this has happened. I'd like to know what *their* secret is. :-)

This is very edifying. I think many authors would say they'd be willing to take this on, but simply don't have the money to do so.

I give you so much credit for doing all that you can do to make sure that your books reach your public--and I'm sure that it has already had a measurable effect in terms of your sales.

I think you all know my opinion on this as far as the publishers go. Publishers are - from what I've read - running scared do to ebooks and the possibility of self publishing. Yes, it is hard for an author to get their name/works out there in ebooks. But is that any different from what they're getting from the publisher? If you're going to have to do it yourself anyway, you might as well get a larger percentage of the profits. If publishers are really scared, then they will start supporting all of their writers, not just the 'bestsellers'. If they did, they might have more of those bestsellers on their books.