In Defense of Clytemnestra and the "Lovely Women" of THE ODYSSEY 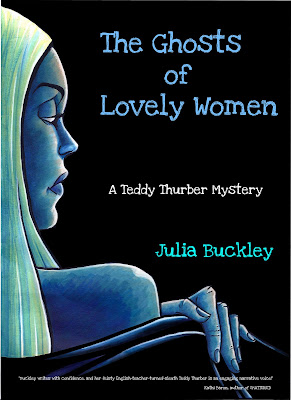 Way back in 2007 I blogged about the mythical Clytemnestra, because I had recently read the Orestia--three short plays by Aeschylus. Clytemnestra, in Greek legend and in the play Agamemnon, is depicted as a monstrous woman, a woman who would dare to plot the murder of her husband and then carry it out in bloody triumph, even as her husband returns, victorious, from The Trojan War. Therefore, Clytemnestra is painted as an aberration, an unnatural woman.

There’s more to the story, of course: Agamemnon killed his own daughter, sacrificed her to the gods so that his ships, which were stalled, would have fair winds to speed them to the Trojan War. This entire detail is given short shrift in the play; after all, this is ancient Greece, and women are second-class citizens. If a man has to kill a female for the sake of his own glory, then he will have to make that sacrifice.

Ironic, though, that Agamemnon is not depicted as a monster, but a hero, and his wife, who exacts premeditated and bloody revenge for the loss of her child, becomes the only “evil” character. Granted, murder is horrible. But isn’t the Trojan conflict full of murder—men savagely slaughtered on battlefields, ostensibly, in debate over the ownership of a beautiful woman? Still, there doesn’t seem to be much literary defense of Clytemnestra’s motives.

Sure, I don’t suppose I would murder my husband if he killed my child, but then again, who knows? Grief itself is monstrous, and can twist a person in different ways. Certainly I did not see in Clytemnestra the horrifying creature that the men in my class did. In general, the women looked at her and saw someone consumed by loss.

It’s not fair, I suppose, to impose a modern sensibility on an ancient story. Clytemnestra is meant to be seen as a monster, and so I am supposed to look for the things that make her horrifying. I find that I just can’t do it, though, especially when I read The Odyssey, and even in Hades Agamemnon, that great egotist, can’t get over what his wife has done to him, and rails about it to every shade who floats his way, and to Odysseus, the visiting human.

What I am looking for is an Agamemnon who seeks out the dead Iphigenia, his murdered daughter, to ask for her forgiveness. That doesn’t happen, of course, nor does Clytemnestra find solace in anyone’s understanding of her deed. Her son condemns her and kills her himself to avenge his father’s death. That son, Orestes, never mentions his dead sister.

Around the time that I wrote about this I was also starting to write a mystery novel that referenced the themes raised in this ancient myth and in more modern literature. Teddy Thurber, an English teacher, must look to the truths of literature in order to solve a crime of the present--the murder of her former student, a nineteen-year-old girl.

The title of the book, THE GHOSTS OF LOVELY WOMEN, comes from a scene in THE ODYSSEY in which the shades in the Underworld want to speak to Odysseus, but only the men are given a chance, and Persephone scatters the "ghosts of lovely women" away, not allowing them a voice.

Teddy feels that her student, Jessica Halliday, was also deprived of a voice, a life, a future--and she pledges to be an advocate for Jessica by seeking her murderer.

That book is now available on Nook and Kindle! If you love the classics, you might enjoy the way that Teddy uses the truths of great fiction to solve a crime in the real world.
Posted by Julia Buckley at 12:00 AM

Labels: The Ghosts of Lovely Women

Just looked up the play by Euripides, Iphigenia in Aulis, in which Iphigenia is given a voice but in the end, heroically consents to the sacrifice out of, hmm, dignity and patriotism. They get her there, btw, by telling her she's going to be married to Achilles. Men! Looking forward to your book, Julia. :)

Thanks, Liz. And thanks for the reference! I did not know of this play.

I think Lucrezia Borgia is another one who has been portrayed unfairly. Best of luck with the new book, Julia!