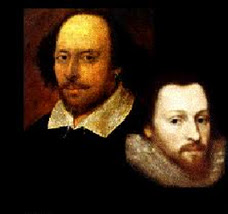 What do you do when they make a movie of your book...but it's not your book?

Let me explain. Have you seen those movie trailers for the new movie Anonymous, the one where Shakespeare didn't write the plays? Well, I wrote that book way back in 1994. It's called The Playsmen, and it's done in an epistolary style. In other words, the story is told through journal entries, letters, documents, and play fragments. It's about a restless young William Shakespeare who wants to make a name for himself as a poet but who isn't very good at it. Enter the earl of Oxford who wants to write, but that is no profession for a nobleman. They make a deal and to young Will it becomes a deal with the devil.

When I first researched for this book, I wasn't quite sure what I was going to write about Shakespeare, only I was quite the groupie back then. I had been in Shakespeare plays in high school and college and I was rather enamored of the bard. So once I sunk into the research I was convinced that Edward de Vere, the earl of Oxford, really was the author of the plays. But how to make it make sense? Way led on to way and I got my story written. At the time, it was the best thing I had ever done. And my agent thought so, too. In the early ninties, you couldn't get arrested for writing historical fiction let alone publish it. Although, she did manage to sell this--my first sold novel--to a small press for the humungous advance of $3,000. I was happy just to sell something! But I kept my excitement in check, because things seemed somewhat subdued. And then I discovered why. Though I was issued the check for half the advance (and it didn't bounce!) the publisher had to call it quits and went out of business before my opus went to press. It languishes here and there on the internet with its ghostly ISBN but it does little more than that. It hasn't seen the light of day since.

But I had plans. Now that my medieval mysteries were selling, it was the first one I took out of mothballs and was reworking to send along to my agent. And then I'm sitting in a theatre and see this movie trailer. My heart plummeted. Yes, I know, as soon as you breathe "Oxfordian" you have your story, though I think my take probably makes the most sense. Who knows where this current movie plot came from? It is disheartening.

What do you do when you see a movie made from your book but it's not your book? You cry a little, sigh a little, and then, I guess, wait again.
Posted by Jeri Westerson at 4:04 AM

Wow, Jeri, what a story. You were robbed! But then, many writers who deal with movie producers end up unhappy about the experience. If it's any consolation, I'll think of you when I see the film. :-)

What a sad story. It seems that for every amazing success story there are a hundred stories of things that didn't go as planned.

Your persistence paid off in your career, but it doesn't help some of these excellent lost books, these Edward de Veres, which will not be acknowledged by the world.

Yes, that was Edward de Vere (I corrected it). See, it's been a long time and in Crispin's time, there is his ancestor Robert de Vere.

Jeri, at least you don't have to reproach yourself that you yourself told the plot to some young pisher of a production assistant at a cocktail party. We novelists laugh when newbies worry about someone stealing their idea. But apparently in Hollywood, it happens all the time.