The Days of Louise Brown 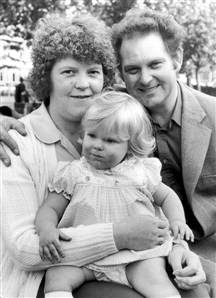 Many blog readers might recall this significant anniversary: 33 years ago today, Louise Brown became the world's first "test-tube baby." Back then the term alone was enough to send some people into a panic, wondering how a baby could be grown in a test tube. But of course we know it now as in-vitro fertilization, and Louise was the first successful birth, thanks to the efforts of Dr. Robert Edwards and Dr. Patrick Steptoe, who teamed up in the seventies in an effort to successfully achieve the fertilization of an egg in a laboratory.

Louise's parents had tried for nine years to conceive a child; they had a second daughter after Louise who was also conceived through IVF.

When Louise was conceived, there was much debate about the morality of the procedure which had produced her, and fear mongers suggested that this was the beginning of a slippery moral slope which boded ill for the future of mankind.

When Louise was born, however, she was just as adorable as any other baby, and nothing about her looked amiss. Around the world, people who had been told they could not conceive a child were suddenly given new hope. According to an IVF website:

"In June 1980, an Australian team led by Alan Trounson, produced that country’s first (and the world’s third) IVF baby. In the United States, Howard and Georgianna Jones’ IVF program in Norfolk, VA produced this country’s first IVF baby, born December 28, 1981. This also marked the return of injectable fertility drug to help stimulate an IVF pregnancy. Since the introduction of IVF, it is estimated that there have been millions IVF babies born worldwide. IVF babies now make up a measurable percentage of the total births in developed countries. Some of these children, now grown to adulthood, have begun to have their own children, IVF's second generation."

Louise Brown's own son, Cameron, was conceived without any fertility treatments at all; he was born in 2006.

She spoke about him in a BBC interview when she turned 30. You can view the video here:

Elizabeth Jordan Carr was the first American IVF baby; she was born on December 28, 1981. She was the world's fifteenth baby born through in vitro fertilization. Carr also has one son, Trevor James, and he too was conceived naturally.

So which of you remember the days of Louise Brown mania?

I do. And even though I was quite young at the time, I was still old enough to wonder why it was such a big "moral" issue. It seemed ridiculous to me to think otherwise.
And lately I've often wondered which of our current "moral" issues will seem ridiculous in a few years. Perhaps people will shake their heads and chuckle over the absurdity that folks under the Bush administration thought stem cell research was somehow "evil."

I remember Louise Brown's birth, and it seems like nothing compared to what's happening these days. Unfortunately, it's still very difficult for some women to have children, and they put themselves through torture trying.

One great "advance" that turned out not to be was cloning. Now we know that the clone starts out with "old" cells and won't live a natural lifespan. I'm sort of glad that particularly technology has such a huge drawback.

Great point--even as a kid I didn't really know why little Louise was causing people such angst. And yes--what will they think of the early 21st century in 50, 100 years?

Sandra, a good point about cloning. But I remember Dolly the sheep and her attendant controversies.

Hey There. I discovered your weblog the use of msn. This is an extremely smartly written article.

I will be sure to bookmark it and come back to read extra of your useful information.

Every weekend i used to pay a visit this web site, as i want
enjoyment, as this this web page conations really nice funny
material too.

What's up colleagues, good article and good arguments commented here, I am truly enjoying by these.

I am happy to seek out a lot of helpful info right here in the publish, we'd like develop extra strategies on this regard, thank you for sharing. . . . . .

Hiya very nice web site!! Guy .. Beautiful .. Superb .
. I will bookmark your site and take the feeds also?
I am happy to seek out a lot of helpful info right here in the publish, we'd like develop extra strategies on this regard, thank you for sharing. . . . . .

Howdy! Do you know if they make any plugins to protect against hackers?
I'm kinda paranoid about losing everything I've worked hard on.
Any tips?

Look into my page: Learn More

Hey! Would you mind if I share your blog with my facebook
group? There's a lot of people that I think would really enjoy your content. Please let me know. Thank you

Feel free to surf to my blog post :: next page

I’m not that much of a internet reader to be honest but your blogs really nice,
keep it up! I'll go ahead and bookmark your site to come back in the future. All the best

Take a look at my page - Cheap Louis Vuitton Bags

Excellent article. Keep posting such kind of information
on your site. Im really impressed by your blog.
Hey there, You've done a fantastic job. I will certainly digg it and personally suggest to my friends. I am confident they'll be benefited from this website.

Wonderful site. Plenty of useful information
here. I'm sending it to a few pals ans additionally sharing in delicious. And naturally, thank you to your effort!

When I initially commented I clicked the "Notify me when new comments are added" checkbox and now each time a comment is added I get
several emails with the same comment. Is there any way
you can remove people from that service? Appreciate it!

Feel free to surf to my web page; Wholesale Jerseys

Your way of describing the whole thing in this piece of writing is actually nice,
every one be able to without difficulty be aware of it,
Thanks a lot.

If some one wishes to be updated with hottest technologies therefore he must be pay a quick visit this web page and be up to date everyday.

Its not my first time to go to see this website, i am visiting this site dailly and get
pleasant data from here all the time.

This is really fascinating, You're a very skilled blogger. I have joined your feed and look ahead to searching for more of your wonderful post. Also, I've shared your website in my social networks

This is very interesting, You are a very skilled blogger.
I've joined your feed and look forward to seeking more of your wonderful post. Also, I have shared your site in my social networks!

Thanks for sharing your thoughts about photo works. Regards

Hi there! This post couldn't be written much better! Looking at this post reminds me of my previous roommate! He always kept preaching about this. I'll
forward this article to him. Pretty sure he'll have a very good read. Many thanks for sharing!

This article gives clear idea in support of the new visitors of blogging, that genuinely how to do blogging
and site-building.

I'm impressed, I have to admit. Rarely do I encounter a blog that's equally educative
and interesting, and without a doubt, you have hit the nail on the head.
The problem is something which not enough men and women are speaking intelligently about.
Now i'm very happy that I stumbled across this in my hunt for something concerning this.