Being a Working Writer 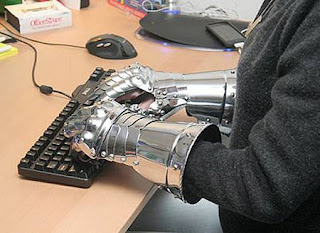 I’m feeling like a full time writer at last! I edited one manuscript and sent it off to my agent. And then I finished up the writing of another manuscript in another series I write under a different name, and sent that off to my editor. While waiting for the agent comments, I received notes back from the editor of the other. And when that’s done and sent, I will start the rewriting of yet a third series I hope to send off to St. Martin’s, the first of which is called OSWALD THE THIEF, a funny and fast-paced caper series about thieves and con men, a sort of Ocean’s 11 in the Middle Ages. And then, I’m still trying to get ideas for some short stories I can send to magazines or compile into my own anthology to self-publish. And during all that, I still have a slew of public appearances to make in and around southern California.

It’s good to be busy. And really, I am enjoying it, even through the grumbling. It’s been a long time since I had a career I enjoyed and not just a job. How do I do it? Well, by treating it like a career.

When I get up in the morning before the coffee is done brewing, I start in on emails. Good to correspond early with those on the east coast since they’re already at work. Then there’s hitting Facebook (both pages, one for Crispin and one for my gay mystery series) to see what’s going on there, and then perhaps checking in on my other blogs and putting up a post or two.

Once hubby is out of the shower and off to work, it’s my turn to get cleaned up. By then, it’s about nine and I can sit down to write. If I’ve got a new project before me, I begin outlining. With at least three series on the table (that’s three books a year), I have to be organized. I’ll never make my deadlines if I’m not. That means, for me, having an outline. Not a particularly detailed one, but I take the one that I wrote for my publisher and expand on it, dividing it into chapters, adding details and other plot twists as they occur to me. And once that is down, I see the areas I need to research. I map those out and if I can’t utilize the books I already have at home—and I have many, believe me—I get on the internet and scope out the titles I need to find. To get those, I sometimes go to my historical lifeline, a medieval listserv of medievalists—scholars, professors, historians from around the world—who communicate and share ideas. I might ask the list what is the best secondary source to get the info I need and they will chime in with recommended texts. I check my local university library online to see if they have it in their stacks and then head out. Sometimes I’m lucky, and the source I want is out of copyright. If that’s the case, then Google Books has it and I can download a pdf right to my very own computer. And if it’s not out of copyright, I can sometimes still find it on Google Books and get to read just the pages I am after (since they blank out every few pages or so).

The research part might take a few weeks to get the info and get it organized. But I can’t delay. I’ve got to get cracking on the manuscript. I set myself the goal of a minimum of ten pages a day. If I meet that goal—which I usually do around three o’clock, I can quit for the day or, if I’m not mentally exhausted and I’m on a roll, I can keep going. Sometimes I don’t quite meet that goal, but it all seems to work out. In about two to three months I have a working draft (since I rewrite and continue to research while I write. I lose days to promotion when I have a lot of driving to do, but as I’m only aiming for a 300 page manuscript, it works out to about two to three months). 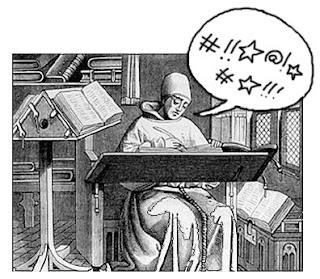 In between all of that are public appearances. I do a lot of library and literary luncheon appearances to get my name out there (just take a peek here to see if I’ll be in your area). That’s not the book tour for the newest release. That’s just the everyday appearance schedule. The book tour for TROUBLED BONES begins with a big party or book launch at my favorite indie in Pasadena, Vroman’s, complete with dueling knights and free-flowing mead. After that I’ll be either driving to my next venue or hopping onto planes every weekend in October and some in November. Does the publisher pay for this? Nope.

It’s all part of the game of writing and staying published. It’s part of the job. And I wouldn’t have it any other way.
Posted by Jeri Westerson at 5:00 AM

Love the armored typist pic, Jeri. That's just what I feel like when I try to thumb my new iPhone.

A third series! And it sounds great.

It's hard for me to concentrate on writing when I have promotion stuff to do, but I'm getting better at it. (I'm basically a "leave me alone in my cave to write" type.) I wish I could juggle it all as well as you do, Jeri.

Jeri, you are the writer that we all aspire to be. Congratulations on all of your ventures.

Who says I'm able to juggle it, Sandy? We'll see.

Thus they start searching for schools few months before the admission season starts. They visit school, ask their colleagues, friends and family members just in search of a good school. After choosing the best school, another thing that sets the parents think is the interview session of their child in the school. They start preparing the child months back, but even then sometime fail to meet the needs. To prepare children for their school interview, parents can follow certain easy steps so that the journey can be done smoothly. The second level of ITIL certification has three practitioner training courses. However, there are some courses that are specifically designed to allow students to finish these three practitioner courses in just one training session; this way he can save a great deal of money, as well as thrice the time. In this article I am going to be explaining the salary of an esthetician. This information is important for those who are looking forward to becoming an esthetician and may be entering the skin and nail care industry. It's very important to know esthetician salary information before you complete your education. This will allow you to get the absolute best jumpstart to your professional career. In addition to professional and educational qualifications, there are several other criteria that must be met by anyone who is interested in working as an FBI special agent. For example, the FBI jobs website says that all candidates must pass a background investigation, and meet certain physical fitness requirements.