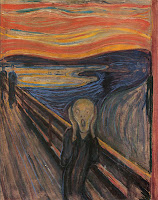 Lately I've been thinking about schizophrenia, a medical illness that by conservative estimates affects about one percent of the world population, which translates to at least two million Americans. The World Health Organization has called schizophrenia one of the most debilitating human diseases. So why am I interested? I don't mean to poach on Liz Zelvin's territory, but as a writer, a lot of the symptoms sound awfully familiar to me.


–delusions: strange beliefs not based in reality
–hallucinations: perceiving sensations that aren't real, including hearing voices
–disorganization: talking in sentences that do not make sense
–writing excessively but without meaning


We as writers spend a lot of time alone, staring at a piece of paper or a computer monitor, trying to string words together in some meaningful and coherent way. A lot of writers joke to each other about listening to the voices in their head when they write. Are we hallucinating?


Or take delusions. Mystery writers kill people–on paper. We are required to make these murders feel as real as possible (all those nice gory details about blood spatter and the like) to convince our readers. Otherwise they will write nasty emails telling us what we got wrong. So in effect, we are deliberately inducing a schizophrenic state, creating convincing alternative realities in our heads.


What about disorganization? When confronted with that blank page/screen, a lot of writers just start setting down whatever comes to them. Nora Roberts famously has called this a "vomit draft" because it just spews out. No way that is going to be organized or even logical. And that "writing excessively without meaning"–that's why we cringe when we start editing. It's no fun looking at your own words and asking your cat, why did I say that? What the heck did I mean?


There are other troubling aspects of schizophrenia that may also apply to writers:

–withdrawal from family, friends, and social activities ("but I have a deadline! I don't have time to talk to you!")

–forgetting or losing things (why am I standing in the kitchen?)

–poor hygiene and grooming (hey, these yoga pants are really comfortable, and the UPS delivery guy isn't going to care whether I've brushed my hair today)


Even more disturbing is the fact that a person who is suffering from schizophrenia may not even know it. Isn't reality whatever we perceive it to be?


Is it worse if you know you're schizophrenic? Years ago I knew a graduate student who had been given that diagnosis. When he was on his medications, he was a really nice guy. When he decided he was just fine and didn't need the meds, he was arrested for smashing car windshields with a crowbar. Do you think he believed that smashing windows was normal and reasonable behavior? But how do you know when you've slipped over the line?


Which leads to the question, where do writers fit in this spectrum? We deliberately set out to create stand-alone realities in our imagination. We have to fully believe in those realities in order to make them convincing to other people. And we do this over and over, building little mini-universes where we create the population and the rules. Does this make us abnormal?


Or does the fact that we share these characteristics with other people, and can not only talk about them but can laugh at them–and at ourselves–mean that we're normal?

I'm sorry but I have to make this comment. As someone who grew up with a close family member afflicted with schizophrenia, I am bothered by your comparing the symptoms of this disease to the habits or tendecies of writers. There is no real comparison between a writer imagining/describing a grusome murder and a person who has no way of knowing that the terrifying monster they see coming at them with a knife is not real. That is the horror of schizophrenia.

Linda, I appreciate your concern, and I don't mean to take schizophrenia lightly. The problem I see is that reality is something of a sliding scale. Certainly seeing monsters and believing they are real and threatening lies at one end of the spectrum. But writers may fall at the other end of the same spectrum: we spend a lot of time in our own heads, often alone, and it's hard to maintain perspective. For that matter, it's hard for non-writers too, if you don't trust your own judgment. So I think it's a matter of degree.

Some writers do indeed become so obsessed with their characters that they lose touch with real people. Some writers say that too much contact with the real world detracts from their writing. I wouldn't equate it with the illness schizophrenia, but the word "schizoid" is used colloquially to describe anyone who has two personas or lives as much in a mental world as in the physical world, and in that respect it fits many writers perfectly.

Life is one big road with lots of signs. So when you riding through the ruts, don't complicate your mind. Flee from hate, mischief and jealousy. Don't bury your thoughts, put your vision to reality. Wake Up and Live! See the link below for more info.