They say don’t put anything on the Internet unless you’re willing for the world to know. Okay, I’m gonna confess. In our house, the stuffed animals talk to us. I could claim writer’s license—if our characters can talk to us, why shouldn’t the plush wolves and teddy bears? But my husband’s not a writer, and they talk to him too.

They tend to reveal their dark side to my husband. 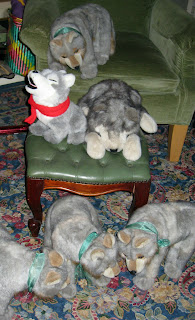 If you tell the wolves something (or someone) is venison, they’ll eat it in a heartbeat. So no jokes about my little granddaughters, please. With me, they’re soothing. The bears especially understand my need for validation. 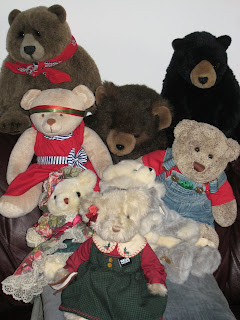 They think I’m smarter than the average bear. They never think my manuscripts suck. And they know the perfect cure for writer’s block: Put a salmon in it.

I guess we kind of channel them. It’s a lot like the way fictional characters say and do what they want to, rather than what the author has planned. We used to attempt periodically to end these infantile, if not actually dysfunctional, relationships with the little guys. And gals—there’s Noelle the book bear, who’s quite the intellectual, and Elfie, who wears a red dress from the Build-A-Bear store, except at Xmas, when she puts her elf outfit on. But I digress. Like any other addicts, we couldn’t just say no to the animals’ demands for our attention and desire for conversation. So we said the hell with it and stopped trying to refrain.

They’re good company, our bears and wolves and moose (who hail from Minnesota and Sweden as well as the usual zoo gift shops). Their conversation is a little limited: the wolves are always talking about venison, the bears about salmon and honey and berries. The moose go wild over green carpet or anything that resembles moss. 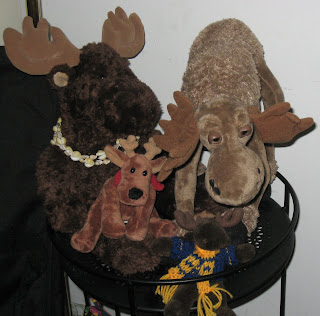 But they’re fun, and they’re extremely plausible. I, for one, believe every word they say.

So here’s how the animals got me in trouble. I’ve been telling this story since Death Will Help You Leave Him came out, but I don’t think I’ve told it in print before. (If I have, blame my aging memory.) When I left for Bouchercon in Indianapolis in October, on the eve of the new book’s official publication date, I left my husband at home with strict instructions to read the book. My cell phone rang in my hotel room at the Hyatt one evening. It was my hubby, and he was laughing so hard that it took me a while to understand what was cracking him up. He’d just read the passage where Bruce is talking about how he hasn’t accumulated a lot of possessions. “I’m not a moose,” Bruce says. “I don’t need moss.”

I finally made out what my husband was saying between howls of laughter.

“They don’t?” I said. “What do you mean? The moose are always talking about eating moss.”

It had nothing to do with him. I’d believed the moose. Who would know better what a moose eats?

“So where did the moose moss come from?”

Since I was at Bouchercon, I got to tell this story to a lot of writers. One of them suggested the perfect comeback if I get any reader emails pointing out I’ve committed an error of fact regarding what moose eat.

Liz--an adorable menagerie! And I didn't know what moose ate, either. Thanks for the fun post.

Oh, I am so here with you. Our collection of stuffed animals has maxed out. We're out of bookshelves for them to sit on. But they talk to us all the time. Their lives are a never-ending round of romantic entanglements and tea parties.

And moose do eat aquatic plants. I saw one do it in the Yukon.

I assumed it came from the saying "a rolling stone gathers no moss"--Bruce doesn't need a lot of possessions to haul around.

I treasure a ratty bear that my grandmother kept at her home for when I stayed over, a koala I "stole" from a friend to keep me company on my first sleep-over at her house, and a wombat from Australia.

Moose don'ty eay aquatic plants *exclusively* -- I'll bet you could find one or two who have eaten moss. When there's deep snow on the ground and they dig and dig, looking for vegetation to eat, and what they uncover is moss, do you really think they'll pass it up? No! They'll be sensible and eat the moss. Liz, you are vindicated.

I've got a bunch of stuffies -- eight pandas, a Stitch (of Lilo & Stitch), a hedgehog, a cheetah, and lots and lots of animal figurines (mostly pandas). I am unapologetic. I've reached an age where I can use "I'm in my second childhood" as an excuse.

I began collecting stuffed animals when I was a young girl and by the time I reached my teens, I had about 200 and could name all of them from memory. I set them up in different poses on all the free surfaces in my room and rotated them from time to time so they each got turns on the bed. When I was 21, I was leaving my childhood home for an out-of-state graduate school and my boyfriend convinced me that our van space would be best used for clothes and furniture. My parents agreed that the time for stuffed animals was past and I watched them fly off my lawn for a quarter a piece in the fastest, most fun rummage sale you've ever seen. Children ran from my house to their house to scare up more money and come back for more treasures. They came back with fistsfull of change and more children. I think it took all of about 45 minutes to liquidate my lifetime collection. I regretted my actions even before the carnage began and I continued to regret it for years to come and regretted it even more after me and dumbhead broke up. Although I didn't have any place for them then, and I still don't, and I think all the children they went to gave them spectacular lives, the only thing I hope now is that they understand and forgive me. If you see them, tell them I said, "Hi!"

Love it, Liz. I have a few stuffed animals too.

I have a basket of my mom's favorite Taco Bell dogs, and I have a big stuffed dog that my late dog loved to chew on. The dolls have taken over now.

Marlo, just read your comment aloud to my hubby. Awwww. Our animals send you a big hug.

Don't the wolves want to eat the moose? Yikes! The carnage I can envision!

Your blog hit home with me, Liz. My husband and I have a huge toy tiger that lolls on the bed all day, along with a tiny tiger and two lambs. Somewhere in the back of our minds they're reenacting the Peaceable Kingdom scenario of the lion lying down with the lamb.

The little tiger,who is not much larger than a soft drink can, travels with us. He's winked up at security people all over the world, let alone all over the US., and has sat on many picturesque windowsill.

We have a great photo of him in front of the Harbour Bridge in Sydney -- with my hands clutching him tightly, because I had to hold him far out over the hotel balcony to get the photo to work!

Thanks for giving me a big smile.

Having seen in the Rockies, in person and on more than one occassion, moose eat moss, it wasn't an error.