Christopher Columbus and Me 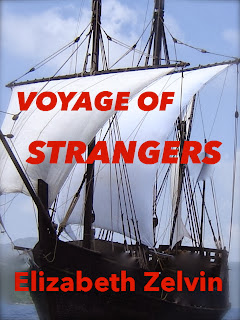 As my blog sisters and I prepare to say farewell to Poe's Deadly Daughters and all of you, the readers who have joined us here, I'm hoping fervently that this is not the end of our relationship but just a bend in the road, a hiccup in our ongoing conversation online, with some of you in person, and through the books we all love. So this is not a valedictory post. In fact, it didn't even occur to me that was an option until I started reading this week's posts. I'm sad to see the blog ending and to lose the daily connection with my blog sisters. AND (as we used to say in the Seventies, when we first discovered there was an emotional down side to BUT), I'm excited about my new novel, Voyage of Strangers , the sequel to my short story, "The Green Cross", which first appeared in Ellery Queen's Mystery Magazine and was nominated for an Agatha Award for Best Short Story.

SO (great way to start a sentence if you're writing a New York Jewish character--no comma, and it doesn't have to be a sequitur) here's how it came about that I wrote "The Green Cross." One night about five years ago, I woke up in the middle of the night with an unfamiliar but insistent voice knocking on the inside of my head.

It was Diego, a young marrano sailor, who would board the Santa Maria with Columbus in 1492, on the same day the Jews were expelled from Spain.

Eventually, if only to shut him up, I got out of bed and scribbled a few notes. In the morning, reading them over, I still didn't want to write the story. I hated research. But Diego's voice was still insistent. I went online and discovered that material was readily available. It even included portions of the logbook that Columbus himself kept on the voyage. Within half an hour, I had enough for that first story, which took place on the Santa Maria and ended with the sighting of the first signs of land.

In turn, "The Green Cross" led to its sequel, "Navidad," which also appeared in EQMM. The novel itself continues the story of my protagonist Diego and his sister Rachel on Columbus's second voyage in 1493-1495. By that time, I had changed my mind about research, having fallen under the spell that motivates writers of historical fiction, learned a lot more about the tragic course of Columbus's discovery, and become fascinated by the many details that were more mindboggling than any I could have invented. My character Columbus changed from a kindly father-figure with detective skills to an obsessed and deluded leader who destroyed an earthly paradise and committed genocide on its people.

Diego and Rachel, secret Jews and therefore outsiders surrounded by the Spaniards' Christian culture, come of age in this doomed paradise, experiencing divided loyalties, love, and heartbreak in the course of Voyage of Strangers. Rachel, who was born as I wrote the first draft, is one of my favorite characters among all those I've created. Her voice and Diego's got stronger and stronger. The story poured out of me--not my usual experience with the first draft of a novel--my hero and heroine's fictional adventures weaving themselves almost effortlessly into the fabric of what actually happened in history.

Unfortunately, in another of those stranger-than-fiction scenarios, as I wrote Voyage of Strangers, our own early-twenty-first-century world underwent a paradigm shift. The publishing industry imploded. By the time my novel was ready, everything had changed for both readers and writers. The agent for my mysteries was not interested in representing Voyage of Strangers. Over the next two years, I tried assiduously to find an agent or a publisher. I had some near misses, but the net result of 150 attempts was zero. Finally, I decided to publish Voyage of Strangers as an e-book.

My decision to publish Voyage of Strangers on Amazon for Kindle is based on my experiences with marketing and promotion in the digital age, both with e-publishers who have picked up my work and previously published works that I've put online myself. I hope that not only those of you who have Kindles will read it, but also readers who have or can download a free Kindle app on your computers or tablets, especially existing fans of my work. If you enjoyed my Bruce Kohler mysteries and/or my short stories, especially "The Green Cross," I bet you'll like Voyage of Strangers. You'll learn a lot you didn't know about the discovery of America. I hope you'll fall in love with the characters and that the book will make you laugh and cry. I'll leave you with a bright idea about time management for readers. Our blog posts on PDD average about 700 words. A novel runs 70,000 words. So if you take the time you've been using to read the blog and apply it to each of our latest novels (Julia's on Mondays, Sharon's on Tuesdays etc)--well, you do the math.
Posted by Elizabeth Zelvin at 3:00 AM

Best of luck with your Columbus novel, Liz. I hope you plan to continue writing your wonderful mystery short stories.

Thanks, Sandy. A new Bruce story, "Death Will Fire Your Therapist," will appear in the Sisters in Crime New York Tristate Chapter's third anthology, Murder New York Style: Family Affairs, at some time within the next year.

Ah, I see another Agatha nomination in your future. :-)

PDD was already well established when Criminal Brief launched. Hard to believe the Daughters will be rolling away that cask of amontillado. We'll miss you!

The novel sounds WONDERFUL, Liz! I'm such a dinosaur, I don't have an e-reader, but this may push me to get one. Best wishes for your writing success!