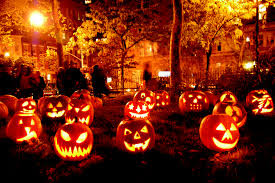 What can I say about Halloween that hasn’t been said before? In the Middle Ages, when most people’s day ended with the fall of dark and midnight was really, really late, it was the eve of All Saints or All Hallows Day, the time when spirits roamed the earth and people got really, really scared at the prospect. 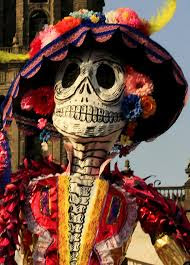 In Mexico, it’s the eve of the Day of the Dead, a national holiday that’s taken very seriously as a time to honor departed loved ones and remember one’s own mortality, with reminders in the form of skulls and skeletons. In the USA, it’s become a secular holiday that can be either cute or nasty. In the innocent 1950s, when I was growing up in Queens, “trick or treat” was a benign tradition. In fact, I don’t remember anything but “treat”—going from house to house collecting candy, which we were allowed to eat, not all at once, but without the faintest shadow of a security check. By the time my son went trick or treating in Manhattan, there was no question of a nine or ten-year-old making the rounds without a parent’s supervision, unwrapped candy had to be rejected, and the kids had already had the lecture about how a bad person might insert a razor blade in an apple. 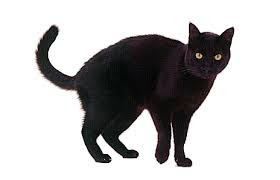 Nowadays, my granddaughters go only to known neighbors’ houses, dressed in adorable but expensive outfits, not the homemade costumes of my younger days. The older one’s been Cinderella, Hermione from Harry Potter, and Medusa, the little one’s been a cow and a fairy princess, and they’ve both been the Queen of Hearts. In my city apartment building, children trick or treat on the premises but only ring the bells of the apartments posted as willing on a list in the elevator. Jack-o-lanterns made with real pumpkins and candles are discouraged as a fire hazard and an excuse for playing with sharp knives. Parents already burned out on sugar-rush birthday parties and paying for expensive orthodontia are not eager to let their kids binge on candy. 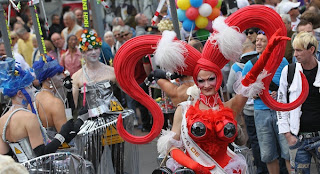 Getting into costume is another story. In certain parts of Manhattan, including Greenwich Village and the Upper West Side, where I live, both grownups and kids dress up, and it goes on for as long as a week, even if you don’t make it to the legendary Christopher Street Parade. Cats with whiskers and fairies with wings are popular, and all the little girls get to be princesses and ballerinas. My granddaughters have plenty of options. They have tutus and grass hula skirts and leis and mermaid tails. In fact, for them, dress-up is not an annual event, it’s a state of being.
Posted by Elizabeth Zelvin at 3:00 AM