Best Kept Secrets of the Hamptons

This month, September, is proverbially the most beautiful of the year on the forty-mile stretch at the eastern tip of Long Island known as the Hamptons. When the summer renters and group house vacationers go back to the city, the homeowners and year-round residents heave a sigh of relief at having gotten through another season and emerge to enjoy the many pleasures of early fall on the beach, on the farms, and in the garden.

Most Septembers (barring those pesky hurricanes that sometimes strike),the grasses and waters sparkle, the sky is profoundly blue, the air is balmy, and the ocean, having spent the whole summer warming up, is at its best for swimming. The beach, packed solid on Labor Day weekend, is deserted the day after the holiday, perfect for long walks, meditational sunbathing, and maybe even a little discreet skinnydipping if you avoid the public beaches.

Another treasure of the area, crowded on holiday weekends but sparsely populated the rest of the time, is Gerard Drive in Springs, the part of East Hampton that was cheap enough in the 1950s to attract such artists as Jackson Pollock and Willem DeKooning. Now it’s prime real estate, and in the wetland areas, which include Gerard Drive, not much new building is done. 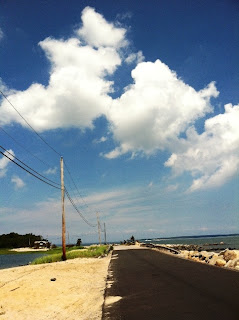 The drive is a 1.7 mile peninsula. The unwary tourist, if not deterred by the Dead End sign, comes out of the .4 mile stretch at the beginning onto a narrow road with water on both sides: Accabonac Harbor on one hand and Gardiners Bay on the other, with Gardiners Island, where a 17th-century Gardiner caught Captain Kidd burying his treasure, in the distance. On a clear day the island looks an easy stone’s throw away, but it’s often dusted with haze and sometimes disappears completely. 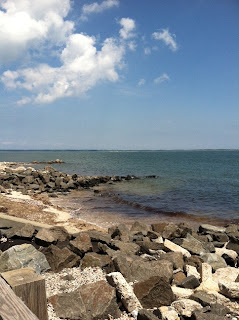 The mud flats exposed at low tide are shared by human clammers and a host of wading birds, including egrets and oyster catchers. Ospreys build their nets on platforms set on poles amid the wetlands to encourage the birds to breed. Piping plovers and least terns, both classified as endangered species, have roped-off nesting areas near the tip of the drive, where fishermen and gatherers of shells can enjoy the view across the narrow channel between harbor and bay to Louse Point, another secluded and beautiful spot. 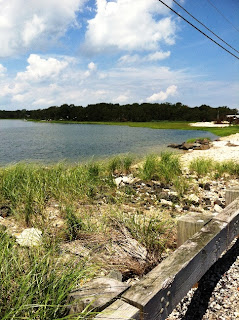 I love to walk the length of Gerard Drive and back—I used to run, but now I use Exerstrider walking poles, which prompt a lot of comments about snow and skiing. Cornflowers, goldenrod, and Queen Anne’s lace grow by the roadside. The air is filled with goldfinches and tree swallows. You can hear the chirr of redwinged blackbirds and the occasional mockingbird running through its repertoire. A seagull wheeling overhead may drop a whelk or moon snail on the road to crack it and get at the edible creature inside. There’s a house right before that first glimpse of the water on both sides where a recorder consort practices on Sunday mornings. You may see deer or rabbits bounding across the road. And every walker, runner, dogwalker, bike rider, and rollerblader you meet will smile and say, “Hello!” “Good morning!” or “What a gorgeous day!”
Posted by Elizabeth Zelvin at 3:00 AM

Looks beautiful!! Thanks for sharing.