The Joy of Random Connections 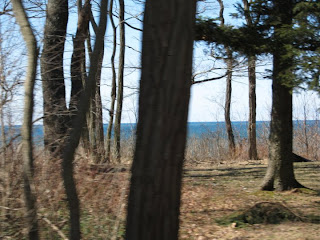 About six months ago a woman contacted me through the e-mail on my website. She had a best friend in grade school named Julia Buckley and she'd been searching for her for a long time, looking to reconnect. Was I, she wondered, the same Julia Buckley?

I wrote back to her and said that, not only had I not gone to grade school in the South, but Julia Buckley was my married name.  However, I told her that I was impressed by her quest, and I hoped she would find the other Julia.  Had she tried Facebook? I asked.

She wrote back to me. She had tried Facebook, to no avail.  But then she asked me about my books and my website; she too was a writer, and often gave seminars at universities.  She was curious about my book, THE GHOSTS OF LOVELY WOMEN, because she had an amazing ghost story that she had considered turning into a book.  (I won't share it here, because she might still do it!)

The gist of this story is that, through sheer serendipity, the two of us began to correspond regularly. In fact, the reason that I thought of this as a blog topic was that she just contacted me today, asking how things were going, and sharing some more of her amazing anecdotes (she's one of those people who has had a life full of fascinating experiences, partly, I think, because she is an interesting person and she tends to attract other interesting people).  We made a pact to check in with each other more regularly, because we both view an e-mail from the other as a day-brightener.

Inspired by her quest for the first Julia Buckley, I tried to find an old friend of my own--a pen pal I'd gotten in grade school (perhaps around 1975), long before Facebook made contacting someone in another land an easy thing.  I had been so excited to get my Swedish pen pal, whose name was Gunilla Christiansson, and we wrote back and forth for a year or more.  We shared pictures, post cards, cultural tidbits.  I loved getting her letters, with the amazing foreign stamps and the thin airmail paper.  After a while we stopped writing, but I always remembered her.  Facebook, I thought, would be a great place to re-connect.

Except for this: guess how many Gunilla Christianssons there are on Facebook?  And guess how many of them are blonde?  And that doesn't even include all the many Gunillas who might not be on Facebook at all.
So I started to realize the problem of my friend seeking Julia Buckley. It's not that easy to find an old acquaintance, even with the magic of the Internet.

And yet, out of a quest for one Julia Buckley out there, I received a little gift in the form of a new friendship. That's the sort of thing that life provides for free, and it is so very rewarding.

Can you share a serendipity story?  I love to hear them.

With me it happens through genealogy. I have found I'm related to total strangers I run into on the street, once we start talking. And I have a wonderful time in cemeteries: once I went to a large one looking for one person who I knew was there, and stumbled upon a single plot with four generations of another branch of my family. (Drives my husband nuts when I do that--he's jealous.)

I call them "small world stories." One I think I blogged about on PDD years ago involved mystery writer Meredith Cole, a friend from MWA and Sisters in Crime in New York. At a mystery party one evening, the conversation touched on colleges, and Meredith mentioned that her mother had just gone to her 45th reunion at Swarthmore in Pennsylvania. Or maybe I mentioned first, a propos an entirely different topic (now I remember! the topic was funny and weirdly appropriate names, and I mentioned having heard of a music professor named Peter Gram Swing), that my sister had attended Swarthmore. At any rate, it turned out that my sister, who lives in Boston (and who I didn't know was going to her reunion), had offered a ride to an old friend, Meredith's mother, who lives in Virginia, and picked her up at Meredith's house in Brooklyn two days before! Meredith had had no idea the woman she opened the door for was my sister, and I had no idea Meredith's mother was someone whose name I might have recognized as someone my sister had known in college. I love this complicated kind of small world story, the more tortuous, the better.

That's wonderful! Yes, they are like little cosmic gifts, and their complexity makes them beautiful.

That's awesome, Sheila--how nice to feel like you're part of such a big clan. :)