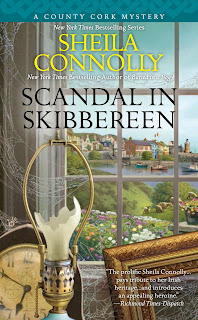 I'm in the midst of first-round edits for the next Irish book (Scandal in Skibbereen), and I've noticed that my editor has commented more than once that she thinks that my protagonist, and a newfound friend, are being mean to a newcomer.

I've been working with my editor for quite a few books now, and I think she's good at what she does, particularly at finding plot holes and balancing pacing and character development within the book.  But on this issue I don't see what she's seeing.

In the book, an American stranger from New York arrives in the small Irish town and meets my protagonist Maura Donovan in the pub she's managing there.  The stranger starts wheedling Maura to help her on a quest, and Maura, trying to be supportive of an American visitor, agrees.  But the newcomer is pushy and aggressive and rude, and she's never satisfied: there's always one more thing she wants.  She's not very likeable—and that's the way I wanted her.

So she tests Maura's patience. Maura keeps trying to explain to her that her New York strategy is not the way to get what you want in Ireland (based on Maura's observations after three months in the country!), but the message is not getting across.  The result is that Maura and her friend Gillian keep trying to rein in the pushy American—and my editor thinks that makes them look mean.

Cozy mysteries have a loosely defined set of internal rules.  There is a protagonist, most often a young woman, who usually ends up solving the crime that occurs in the beginning of the book.  She must be likable and appear sympathetic to readers, so they will root for her to succeed. This protagonist surrounds herself with friends, who help her solve the crimes, and they can display a range of personalities, but they're usually likeable too.  We want them to find the killer, working together.

But that does not mean that everyone who appears in the book must be "nice." Sometimes there are characters who nobody likes, for a variety of reasons.  Sometimes they're a suspect in the murder, or even the killer, but sometimes they're not necessarily guilty of anything other than being "not nice."

In Scandal, Maura and Gillian are trying to be helpful, but they're not getting any credit for it.  They're trying to smooth the visitor's way so she can get what she wants, but she keeps trampling right over them and making things worse.  Is it any wonder they don't like her very much?

I'll admit Maura is kind of rough around the edges.  She grew up in a blue-collar part of Boston and she's never had much education.  She's socially unpolished.  She's also kind of bewildered about the turn her life has taken in the last few months, but she's getting used to it.

Now she has a foot in both worlds, Boston and small-town Ireland; her past and her future.  Whether she's admitted it or not, to herself or to anyone else, her heart now lies in Ireland.  The pushy newcomer represents the worst side of what she's left behind, and she feels protective of her new friends and new home.

There are plenty of available examples of female protagonists who don't play by the rules.  Think of Sue Grafton's Kinsey Millhone, or Kathy Reich's Temperance Brennan (at least as portrayed on the Fox show Bones).  Or the protagonist on The Bridge, a new cable series that debuted recently, who has Asperger's and manages to annoy a lot of people.  Being "difficult" is all right—as long as the writer makes the character more than one-dimensional.  You have to show enough of the character's softer side to make the reader want to like her.  And that's the tricky part.

I's challenging to create obnoxious characters and make them more than one-dimensional. Ideally, over the course of the book they begin to change and grow.  Besides, it's a lot more fun to write them!

Sheila, it sounds like you want the reader to dislike the pushy American, but your editor is disliking Maura for her reactions instead. Can you keep an open mind about how your characters are coming across and maybe try them out on a few trusted beta readers without tipping your hand in advance? Maybe readers will never reach a consensus, though. I can't get one on my series character Barbara, who some readers see as strong, some as funny, and others as downright annoying. I just have to live with some readers not liking her. On the other hand, she's not my protagonist but a sidekick, albeit an important one.

I think the trick is to create a character that is equal parts offputting and vulnerable. What comes out of his or her mouth may be snide or sound harsh, but the writer has to make the reader see where it's coming from, not just take it at face value. Not easy! And as you say, not everyone is going to like all the characters.

I think another aspect of my problem is that my editor sees the two other women as somehow ganging up on the newcomer--two against one (although that one can more than hold her own!). We're working on it.

It's hard to create a multi-dimensional character when you're being urged to make her "nice" all the time. Nice can be awfully boring. Maura has a reason for the way she's behaving, and if you get that across I don't think your readers will object at all. In this case, it sounds as if readers will cheer her on.