Today, the fabulous Kim Fay. I met her at one of the many literary events throughout southern California. She's bright and charming and you can't help but like her. And because paying it forward is my personal mantra, I wanted to give her a leg up. Turns out she didn't need it. Her first novel, The Map of Lost Memories, earned her an Edgar nomination this year. And she'll be talking about that. 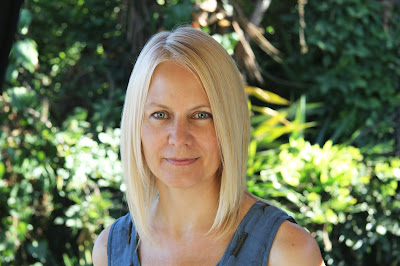 Solving the Mystery of My First Love
by Kim Fay

One morning in January, I opened my email to find a message from the marketing manager assigned to my novel at my publisher: I just heard the Edgar news and wanted to send you my congratulations!

Although I didn’t know what she meant, my heart still skipped a beat. I quickly Googled “Kim Fay” and “Edgar.” There it was. My novel, The Map of Lost Memories, was nominated for an Edgar Award for Best First Novel by an American Author. An Edgar! The mustachioed Oscar of the mystery writing world! Incredible! Except for one thing …

My novel wasn’t a mystery. 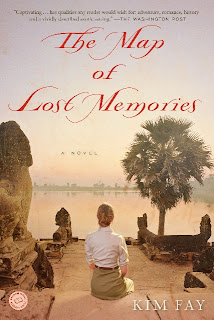 Since its publication in August of 2012, it had been marketed as a historical novel. As a literary novel. As an adventure novel. And, unsurprisingly, a historical-literary-adventure novel. Not once that I knew of had it been slotted into the mystery category. Yes, it had been chosen for one of Poisoned Pen bookshop’s monthly book clubs, but it was a Modern Firsts pick, not a First Mystery or Mystery of the Month or Thriller pick. This would explain why it wasn’t just me who was caught unawares. My editor, publicist and agent (none of whom had submitted the book for nomination) were surprised too.

Then I started to think about it. My mind wandered, all the way back to my childhood, when I couldn’t get enough of Nancy Drew and Phyllis A. Whitney’s gothic stories of suspense and Betty Cavanna’s mysteries set in Marrakech, the Spice Islands and Thailand. My first first novel, written at the age of ten, was The Mystery of the Golden Galleon. I recalled my early forays into literary fiction and how intensely I was drawn to Graham Greene. Then I reconsidered The Map of Lost Memories: its quest for a lost Cambodian history, its suspicious murder (was it intentional or was it an accident?) and its family mystery that slowly unfolds. I realized that, without my knowing it, I had stayed true to my first fiction love: the mystery.

Because of this, at the age of forty-six, I tumbled into a literary world where I finally feel I belong, and where I had wanted to belong, subconsciously, even before the nomination. When I attended the West Hollywood Book Fair in October to speak on a panel, I found myself at the Sisters in Crime L.A. booth, uncertain since I did not write traditional crime fiction, but asking anyway: may I join? Jeri Westerson, the chapter’s vice president (and also president of the SoCal Mystery Writers of America chapter), enthusiastically let me know I was more than welcome as she handed me the application brochure. But a month passed, and I did not apply. I was invited to speak at Mysterious Galaxy during the holidays, and still I did not apply. I was afraid I might be called out as an imposter. Then came the nomination. My entire world changed.

I have worked for years in indie bookshops, I have made the literary rounds, but never have I belonged to a literary world so welcoming and supportive. Since January I have been surrounded by mystery writers—at Sisters in Crime and Mystery Writers of America meetings, at the Tucson and L.A. festivals of books—and bar the odd exception (aren’t there always odd exceptions!), they have opened their arms and taken me in.

Along with the above-mentioned Jeri Westerson, there is Patricia Smiley, the oh so hospitable president of Sisters in Crime L.A. Naomi Hirahara, generous author of the Mas Arai mystery series. Travis Richardson, equally generous editor of the Sisters in Crime L.A. newsletter. Hilary Davidson, author of the Lily Moore mystery series and terrific partner in margarita-drinking crime. Susan Elia MacNeal, my fellow nominee and keeper of my foot-in-mouth secret after the Edgar awards banquet. Hank Phillippi Ryan, the gracious and deserving winner of the Mary Higgins Clark Award. Margery Flax, hand-holder extraordinaire and Administrative Director of Mystery Writers of America. And, and, and … I could go on and on. About how great these people are. About how much fun they are. About how at home they’ve made me feel. About how inspired I am, to fully explore the mystery in my next novel and even to pull out a series I’ve been secretly plotting for the past few years.

As for the Edgar Awards, when my category was called at the banquet at the Grand Hyatt New York on May 2, I sat on the edge of my seat, surrounded by my husband, agent, editor and dozens of new friends. I did not win. Did I feel a bit boo-hoo about this? Of course. But even if I had won, that wouldn’t have been the best part of the experience.

I didn’t prepare a just-in-case speech for the awards, but if I’d had the honor of standing up on the stage, I know how I would have finished it: If I was given the choice to belong to any group of writers in the world, it would be this one. Thank you for inviting me to your party.

Kim Fay is the author of The Map of Lost Memories, published by Ballantine Books/Random House and available in paperback on June 18, 2013. www.kimfay.net

Posted by Jeri Westerson at 4:00 AM

Absolutely agree with you about SinC!

I sat at your table at a MWA lunch meeting and first heard about your book (and the two book covers). I bought the Kindle version. You deserve the nomination, and indeed SinC-LA and SoCal MWA are friendly, welcoming groups, even to a journalist like me. Hope to see you soon. I can't wait for the series books!

I've added your book to my (huge, I'm afraid) must-read pile. We lived for 2 years in Indonesia. It wasn't all that happy a time, but fascinating. I was trying to finish a novel about Renaissance Florence inside our walled house. Very strange. Every night the Ten O'clock Rat as I dubbed him, ran up the fancy faux-rock wall of the swimming pool. I did love and would love to revisit Bali in real life or in a novel.

Hi Kath - I think anyone who's attended a SinC meeting anywhere feels the way we do!!

Jackie, I remember meeting you at the MWA table. It was such a pleasure, and I really enjoyed our conversation. Thank you so much for your kind words about my book.

And Yves, that sounds like a crazy experience, writing about Florence while living in Indonesia. And I think your rat had cousins that lived in Vietnam while I was there!! Thank you for adding my novel to your list.

Aww.... and Kim, I am SUCH a fan! It was fabulous to meet you--and what a treat not only to have had a wonderful life-changing time--but to have made a new friend.

Kim, all your fellow Sisters and Misters are so proud of you as is everyone in the Southern California crime fiction community and beyond. But enough of this mushy stuff. Get back to work writing that next novel! It's sure to be a winner.

Thank you so much, Hank! Your warmth and talent are such beacons for me as I work on my new books.

And Patty, I will continue to hold all the good mushy feelings in my heart while I forge ahead ... all the while learning from our great community. I know my next book is going to be all the better for the mystery writers who have come into my life.