Variety on My Bookshelf 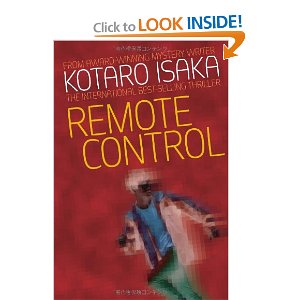 Recently I've read a variety of books for different reasons; but as a mystery lover, I always seem to find an element of mystery in a book, whether it's shelved in the mystery section or not.

Remote Control  is a Japanese suspense novel by Kotaro Isaka.  I enjoyed this novel and will be using it in my world literature class next year. Not only does it have a suspenseful plot (a young man is framed for the murder of the prime minister in a slightly futuristic, vaguely sinister Japan), but it offers much detail about Japanese culture, as well as a glimpse of how American culture has influenced young Japanese people, in both positive and negative ways. The main character, Masaharu Aoyagi, is a former delivery truck driver who is currently unemployed. Though he is used as a patsy by forces unknown, he has a determined and quietly heroic spirit which will work to his advantage--as will his small arsenal of true friends. 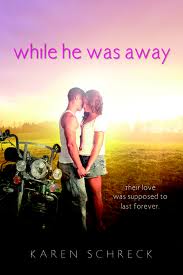 While He Was Away, by Karen Schreck, is a novel much more serious than its teen-light cover might suggest.  It's a beautifully written tale about young lovers separated by the Iraq conflict, and the reality, not only of a fifteen-month separation, but of the inevitable changes that happen to people under stress.

Schreck has created two memorable characters in Penna and David, both artists who tend to express themselves through their drawings and paintings.  This fact creates some memorable and heart-breaking scenes in the story, but Schreck is careful never to give in to sentimentality.  A Puschcart Prize-winning writer, she uses delicate prose to weave a story which never seems to stray from the real.  I enjoyed this novel very much, and I recommend it not just to those who have loved ones in the military, but to anyone who might wish to read a beautiful love story (actually two loves stories, since Penna learns that her grandmother was separated from her first love by WWII). 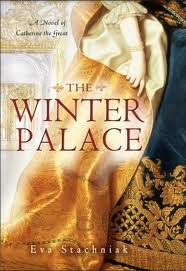 My current read is the gripping The Winter Palace, by Eva Stachniak.  This is a fictional but well-researched account of the rise of Russia's Catherine the Great, who came to the palace as a shy German girl but eventually became--well--Catherine the Great.  The book is narrated not by Catherine, but by Varvara, an orphan who learns herself about power in the palace when she becomes a "tongue"--or spy--for the Empress, who needs someone relatively invisible to tell her what is going on in her own castle.

Varvara learns about power and betrayal, and when the young Sophie (later Catherine) comes to the castle, Varvara befriends her and becomes her fierce protector.  The fascinating premise is that the friendship of two girls can outlast any palace intrigue or changing allegiances.

Normally I don't have time to read this many books, but these were all required reading, and I found each one to be a most satisfying read.  I highly recommend them!

What's on your bookshelf now?

Labels: eva stachniak, karen schreck, kotaro isaka, remote control, the winter palace, while he was away

For me, it's an exception to my usual reading -- We Were Soldiers Once ... and Young: Ia Drang -- The Battle That Changed the War in Vietnam, by Harold G. Moore and Joseph L. Galloway. I do not normally read non-fiction about contemporary events (I'm of the age where the Vietnam War is far too recent to be considered "history"), nor am I much given to reading books about wars, but this book has been receiving a good deal of favourable attention. When it showed up as a Kindle "Deal of the Day" last week, I could not resist the temptation.

So far, I'm finding it fascinating -- nothing "bran' new and exciting" as such: those of us who were alive and aware back then would have been well aware of the generalities. This book, however, gives specifics: a particular battle, a particular set of people. I'm not regretting my choice, here. But ... I'd be hard-pressed to see it as in any way a mystery. Sorry.--Mario R.

Still sounds like great reading, Mario! Thanks for sharing.