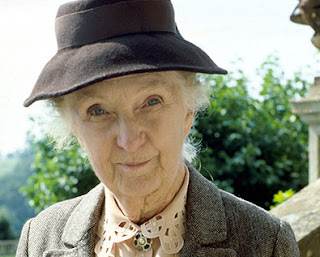 A blogger named August Wainwright has proposed a "March Madness" sort of competition, but instead of relating to sports, his relates to fictional detectives, whom he is pitting against one another in order to allow readers to vote for their favorite or, in essence, the best.

I chatted with Mr. Wainwright online and suggested that, if I were to play the devil's advocate, I could find certain problems with his list.  He noted that there were several other detectives he wanted to include, but that they did not make the final cut.

A perusal of the list reveals that certain key detectives seem to be missing, many of them women.  Therefore, like all lists, this one merely reflects the (perhaps unavoidable) preferences of its compiler.  In addition, he has mixed fictional sleuths, television sleuths, and young adult sleuths, which I see as three distinct genres.  I might find it easier to vote if, say, the list only dealt with detectives from mystery literature, since my criteria would be different for television sleuths.  In a competition with adult sleuths, Nancy Drew would not even be on my radar.  But if I were looking only at YA influences, she would be right up there with the best.

So the potpourri gives the list a random feel--but perhaps this is better for the voting?

What's your take on the list?  Will you vote on Wainright's March Madness?  If so, for whom would you vote overall?  Who would you ADD to the list of choices that is not represented right now?  Is there a best detective you would vote for that he does not have in the running?

For me, there are several, but I don't want to name them until I hear from mystery aficionados. Who absolutely belongs on this list?  Or do you think the list is okay as it stands?

And August Wainright, feel free to chime in!

(Pictured: Joan Hickson as Miss Marple; one of the many women to play Marple on the PBS televised series, and possibly my favorite.  Image link here).

I looked at the brackets but I don't think I'll join in the voting. In some cases I don't know one of the pair and in some I like them both too much to choose.

Liking them both is a problem--although I suppose it would engender some good discussion about the strengths of each detective.

Maybe we should remove Sherlock Holmes from consideration, since he would obviously beat out anybody else we could mention. :-)

An interesting point, Sandra. Holmes would get the vote for a number of reasons, even if the people voting for him don't actually read Conan-Doyle.

Should V.I. Warshawski, Sharone McCone, or Kinsey Millhone be on the list?

Hi Julia. Let me start by saying that I agree with all of your points and wrestled with a few of these issues.

In presenting this as a "Mystery" tournament to crown the greatest mystery hero/heroine of all time, I decided to give myself some leeway on how I defined what a mystery book was. I've had a lot of great feedback (both positive and negative) and already have some ideas for if I expand to 32 characters and go at it again next year.

My only real criteria was that the characters all be from books, preferably a series of books. So,
although I used the TV and film representations of some of these characters, they all appeared on the printed page first, and those were the characters I was judging. After that, I looked at lists for "Best Mystery Novels of All-Time" and also looked at the best selling mystery series of all time (hence the inclusion of Nancy Drew; I got an email asking why the Hardy Boys weren't included)

The characters I really struggled with the most were Kathleen Mallory, Nero Wolfe, Kinsey Millhone and also Eve Dallas from "JD Robb". I really would have liked to be able to squeeze those four in, but with only 16 spots, it just couldn't happen.

You're absolutely right in that I had my biases coming in and probably ranked the characters accordingly, but overall, the feedback has been great and I'm having a great time with it. Maybe we'll launch an even larger bracket next year.

Sandra - It did feel almost unfair adding Sherlock in there. But as the vote count started to rise, Kurt Wallander received more and more votes. I could see a slip up potentially happening.

I would suggest that none of us could make a list without including our own biases. But that's why you'll always get feedback on your list.

And you're right--I originally was thinking of Clarice Starling as only a movie detective, but then I remembered the Thomas Harris novels.

It certainly is an interesting set-up and I look forward to seeing the results.

There are so many, I'm not sure I can pick a favorite. There are certainly the classics, like Miss Marple, Hercules Poirot, and Sherlock Holmes. How about some recent ones? (I don't know the rules, but I don't do surveys anyway, so I'll ignore the rules.) I'd certainly add Spencer, Harry Bosch, and Alex Cross as favorites. My all-time favorite? Elijah Bailey! I bet no one here has heard of him, so check out Asimov's Caves of Steel and The Naked Sun. He beats them all in figuring out a complex case, cases that none of the ones I mentioned could ever solve!

I think some of the best crime fiction ever produced is being published these days. Some of it is historical, but it has greater depth and a much more authentic feel than what was written a century ago. I have to salute my fellow mystery writers for the wonderful work they're turning out -- tales that are original, compelling, and thought-provoking, in addition to being well-written.

Sandra, I couldn't agree more. I will probably expand the number of entries to 32 next year for that very reason. There are so many characters being created today that deserved to be judged on the same scale as the classics.

I wonder, too, if Auguste Dupin should be on the list, as the first detective, and a sort of model for Holmes?

Steven, I'll have to look up Elijah Bailey!

Henning Mankell's Kurt Wallander is missing. He's my favorite of all.

Dorothy, Wallander is actually there. He's the second one on the left side.