I will shamelessly piggyback on Sharon's lovely post from earlier this week, about family photos.  I am thanking my lucky stars that no one in my family was quite so obsessive about cataloguing our family on either side, because we fall far short of her tens of thousands of images.  Of course, that's a mixed blessing, because there isn't much for me to look at going back.

My engineer father was the primary photographer in my family (my mother professed an aversion to all things mechanical).  That does not mean my father was particularly good at taking pictures.  He wasn't documenting anything.  He often preferred artsy scenes of sunrise to family groups.  And when he did take pictures with people in them, he had a persistent habit of focusing on their faces, which means that people's feet are often cut off, and we get a great view of the ceiling in a lot of places.  I do understand—I have to fight the same tendency myself, because it seems almost rude not to "look" people in the eye when you're taking their picture. 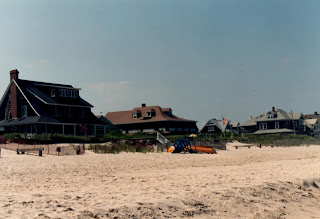 Recently I was asked to submit a short essay for an anthology whose proceeds (if it's published) will go toward rebuilding the Jersey Shore, hard hit by Hurricane Sandy.  Since a lot of my happiest early memories go back to Long Beach Island, I was glad to participate.  Of course the first thing I did was to go searching for the photographs from that era, which proved to be challenging. We had 8-mm movies (I have those, and the projector and screen to show them, not that I ever do) and snapshots, and by our last years there I had a camera too, and took my own clutch of bad pictures. 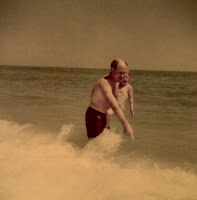 The pictures were scattered among those my grandmother had saved, those in albums my mother had assembled (giving up when I was younger than ten), and those I had taken.  They were oddly faded and curled, and even the negatives weren't much use, since modern negative scanners favor the 35mm format, not the old square negatives. 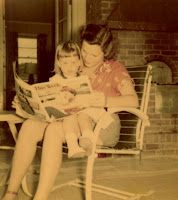 But I wasn't making a picture book; I was looking for images to trigger my own memories.  There weren't many photos, but there were enough.  I was pleased that the pictures corroborated what I recalled:  those were happy days.  No television allowed at the Shore, so I read—that's when I got into Nancy Drew.  Nobody back then worried about skin cancer, so we spent long hours on the beach, coming back bright red.  I spent a lot of quality time with my father, and he taught me how to body-surf.  I can't catch a wave now without thinking of him.

We drank brightly-colored nameless sodas and we ate a lot of lobster.  I collected shells, and once I found the carcass of a horseshoe crab (which my mother wouldn't let me keep). One time after an overnight storm I railed against the trash that had washed up on the beach (luckily in those days we didn't even know about medical waste), and marveled that by the next day it had disappeared as quickly as it had come.

Nobody labeled the pictures, so I had to do some guessing about when they were taken.  Luckily back in those days Kodak printed the date on the processed photos, so that helped a little.  We didn't entertain a lot, so there aren't many mystery faces to puzzle over.

Once, many years ago in France, I spent an afternoon sitting on a family's shaded lawn, and the entertainment consisted of pulling out boxes of family photographs and postcards, handing them around, and commenting on them.  I wasn't related to that family in any way, but they assumed I would be want to be included, and in a way I was.  People should do more of that.  We should share pictures not merely to identify who the smiling faces are, but to recall the events they depict and the memories they evoke.  That's how we keep our families alive.

I too was inspired by Sharon's post and have now started what promises to be a long project scanning the best of the old photos into the computer and assembling them in some form that will be comprehensible to my grandchildren when I'm not around to tell them about the family history. I'm calling the project Roots & Branches. :)

Hi Sheila,
Yeah, I need to do the thing with the old photos too--too many of them will be meaningless to kids and grandkids if I don't (or to me when senility sets in).
Reading your post reminded me of how hit and miss Sandy's attack on the shore was. Our favorite spots, Spring Lake and Cape May, were hardly touched. We recently went to a wedding reception in Point Pleasant--parts were hit, but not the reception site. But the whole area is still recovering and too many shore residents are still homeless.
All the best,
Steve

I find old photos from my ancestors meaningful even when I don't know much about them. It is interesting though how many people may look alike in family pix, another good reason to label them! (Or to share the label with other in the family if you were the one who got the copy that had a listing of who was who.) In my family a lot of pictures were reprinted so the Kodak date or Fox photo date is the date of the mass reprinting.

I am fortunate to live in a town where you can get the wide format negatives processed if needed but they have been more expensive for years. My dad gave me his Brownie camera and I quit with it years ago only because the film was expensive and the processing a dollar a photo back then.

Also, I have always wanted to see Cape May and Steven M. Moore answered the question I hadn't heard from anyone else about it.