There's no men like snowmen. Yes, as you can see, I've been infatuated with snowmen from quite an early age. I think I am five years old in that picture. 1965. Yup. That's me. And that's an inflatable snowman next to me. And we were inseparable. Some kids had teddy bears or dolls. But I had a snowman. Why a snowman?

Well, for a little Jewish girl, I suppose a snowman is a safe, secular image of winter when there abounds many Christian symbols all around us: Christmas trees, holly, angels, Santa, reindeer, and mangers. Snowmen are safe. They are always cheerful. They're happy.

Of course, what's a kid in southern California (who never even saw snow on the ground until we ventured to the mountains when I was about ten) doing with a snowman?

I think we must have gotten it from a dime store, when things really did cost a dime. And snowmen are happy when my childhood wasn't so much. It must have coincided with my love of the Frosty the Snowman story. Which came first, I wonder, the inflatable fellow, or my hearing the song or reading the Little Golden Book? Doesn't much matter. I was left with a lifelong love of the chilly fellows and I've been collecting them ever since. 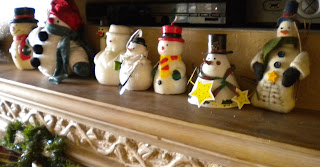 These are just a few of the many snowmen in my collection. Some only make appearances during the holidays, and some sit around the house in my office and in the living room all year.

And just to keep things medieval here, here is a picture of the earliest known depiction of a snowman in a Book of Hours, ca 1380. Presumably, my character Crispin Guest could have made a snowman when he was a lad.

According to The History of the Snowman by Bob Eckstein, snowmen have come to mean different things throughout history. Perhaps they were blobby at first, but somewhere around the Renaissance, they were scuplted with a lot more skill and were more representational of individuals. Now, of course, they are just as much part of crass commercialism as anything else.

There is Frosty, though. I'm certainly not talking about that horrible 1969 Rankin Bass amateurish cartoon catastrophe. No, please excise that from your memory banks. It is an affront to the ice person of Frosty and all who love him. No, there is the Gene Autry hit song from 1950 that spawned the wonderful Little Golden Book with the politically incorrect illustrations (and only so because there are only white kids in the story) by Corinne Malvern.

I mean look at that icy punim. That corncob pipe, that button nose, those two eyes made out of coal. Who couldn't love that?
Here's a cake I made a few years ago. It's freakin' adorable!

Given where I live, I never even made a snowman until late childhood. It's hard work. That's a lot of snow to move, after all. I still live in a snow free southern California, and the Snowman that sits on my porch this time of year is, alas, made of plastic. Such is life. But if you love the Snowman like I do, you gotta have them around in one form or another. They make me smile and there aren't too many things that can easily make me do that.

If you'd like to know more about Snowmen, do get the Eckstein book. I'm thinking it's the definitive book on snowmen, because...er...how many people really want to write about them?

Jeri, I have really enjoyed your spirit in addition to loving your books. My favorite Holiday song is "Waliking in the Air" from the movie, "The Snowman." It's from a book whose author I am blocking right now. For you, December is filled with pleasure it seems. A good New Year to you!

I'm also a Southern California gal, although I live in snow country now north of Boston. All our childhood books featured kids with snowballs and apple trees. Not an orange tree in sight! I also didn't see snow until I was older and we "drove to the snow" for the day up at Arrowhead. Such a funny concept to Northeasterners.

It was truly fun to make real snowmen with my sons when they were younger, and snow is forecast for Christmas morning this year, so maybe we'll get another chance, even though my boys are in their twenties now, since they are both home for the holidays.

Visit me in Chicago this winter and we'll make a snowman together!

Lil, I LOVE that cartoon. I watched it all the time until we gave up on our VCR. I have yet to replace it with a DVD. But those high English school boy voices. And the sweet, sweet story.

Ain't that the truth, Edith? If you want to depict winter in a children's book or on a TV show, you always show snow. But we never saw it unless we traveled to it.

The cartoon is based on Raymond Briggs, The Snowman, and I agree: "Walking in the Air" is gorgeous, especially in conjunction with the visuals. It was sung by Peter Auty, who grew up to become a tenor. I have the DVD (my VHS tape simply wore out from re-playing), and bring it forth each Christmas.