Since the first night of Hanukkah is December 7th--not very far away--I decided to post an article I've run before on my other blog, Getting Medieval (because like any older person, I'm beginning to repeat myself):

Growing up Jewish in a Christian America was sometimes trying, especially when my family was of the reformed variety. Christmas couldn't be avoided. It was everywhere in shops, on television in the children's fare of "A Charlie Brown Christmas" and "Rudolf the Red-Nosed Reindeer", and on the radio with Christmas carols bombarding the airwaves. Little wonder this little Jewish girl comes to look on at Christmas with brightly shining eyes.

But it was the Dickens Christmas of roast goose and wide-skirted carolers; Father Christmas and plum pudding (of which I had never partaken), that captured my imagination.

Hanukkah, the Jewish festival of lights that rolled around usually at the same time as Christmas, just couldn't hold a candle. Er...

But it is a holiday with many meanings and expresses many events at once. The medieval Jew embraced it: the idea of the smaller army of Jews rising up to conquer their gentile oppressors. Always a popular theme with Jews in Europe when they were ousted from so many places, just as they had been ousted from the Holy Land. They could relate to that ancient history since it kept happening to them again and again.

Given that this is a holiday with no biblical source (the Books of Maccabees where part of the Hanukkah celebrations can be found, are listed in Christian bibles, which are apocryphal to Jews and not considered part of the canon), there was a clash between those rabbis who followed oral rabbinic traditions and those that were strictly biblical. (The same clash occurs between Protestants and Catholics regarding traditions with a small "t" and Traditions with a large "T". In the Last Supper, for instance, where the gospels say that Jesus is reclining at table is a perfect example of the importance of following tradition with a small "t". Biblical commandments in Exodus have God exhorting Moses to instruct the people to eat their Passover standing up as a people in flight, ready to high-tail it when the time is right. But sometime between the time of Moses and the time of Jesus, Jewish tradition changed to the partaking of the Passover in a reclining position. As it says in the Haggadah [the prayer book used during the Passover Seder] the Egyptian Hebrews stood to eat just as a slave stands to eat in the presence of his master. But to recline is to exclaim one's freedom. Thus Jesus, as a good Jewish boy, follows Jewish tradition rather than God's biblical command.)

The source for Hanukkah, or the Dedicating of the Temple, comes from something called the Megillit Antiochus or the Scroll of Antioch, dating from somewhere between the 2nd and 5th centuries AD (there's more on that in the Jewish Encyclopedia.) The Books of Maccabees talks about a re-dedication of the Temple by Judah Maccabee, his brothers, and his army, but never specifically mentions a miracle, only that the celebration should last for eight days, which, indeed, most Jewish holidays do. (In Jewish numerology, Seven is the perfect number: seven days of creation. But the number eight--God--is beyond perfect. When a boy is eight days old he is circumcised and brought into the covenant. Eight days for most Jewish celebrations.) It is this scroll that gives us the story of the miracle of the oil.

The Story: Around 175 BCE, Antiochus IV Epiphanes King of Greek Syria and other places, ruled over the Jews and outlawed Judaism, ordering a statue of Zeus to be erected in the temple. The Maccabees revolted, won, and worked to reconsecrate the Temple, getting all that nasty gentile stuff out of there, building a new altar, etc. In order for the re-dedication to be complete, the menorah or candelabrum or multi-burning oil lamp was to burn for seven nights, but there was only enough consecrated oil to burn for one day and there was no time to get more. But it miraculously burned for eight days. Thus the eight day celebration.

In the middle ages, the Megillit Antiochus was read aloud in synagogues much as Purim, another rabbinically declared holiday and another tale about Jews rising up against their oppressors, was celebrated. Jews reenacted the lighting of a menorah in the synagogues as well as in their homes. The proper way to light a menorah is to have it in a doorway. Not quite practical, so the next best thing is to have it in a window, fulfilling the rabbis decree to show the miracle to the world (which is why there are all those public displays of menorah lighting. It is NOT the Jewish answer to a public lighting of a Christmas tree. If anything, it's the other way around.)

Though for all that, Hanukkah was never a huge holiday. It was just one of many. Certainly not a High Holy Day like Rosh Hashonnah (Jewish New Year) or Yom Kippur (Day of Atonement). It was another reminder to Jews of God's miracles and His dedication to the Chosen People no matter where they find themselves and under what circumstances.

And by the way, have you noticed that it falls on different days year by year? That's because it's a moveable feast. The Jewish calendar follows the cycles of the moon and so Hanukkah can fall as early as Thanksgiving and as late as after Christmas, but usually comes somewhere in between.

The tradition of giving a gift for each day of the holiday is more a reflection of their Christian neighbors during a gift-giving season than part of any older tradition. The Eastern European tradition of eating foods cooked in oil, however, can be more gratifying if not cholesterol-building. Because it is a feast of oil burning, foods such as latkes (potato pancakes) and donuts are part of the fare. Can't knock that. Playing the dreidel is supposed to be a reflection of a game that the Maccabees played while waiting to attack their enemies. It's like dice. It's a gambling game. 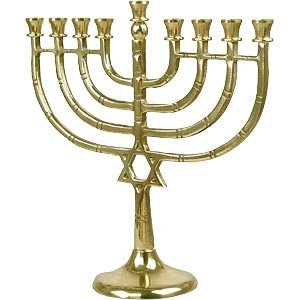 Incidentally, you haven't miscounted when you see a menorah and wonder why it has nine places for candles instead of only eight. The center place is for the shamash or helper candle. It merely lights the other ones. However, you will notice in all the older images and bas reliefs of menorahs, they have the more traditional temple number of seven arms (six and the shamesh).

So next time you see a menorah and hear about Hanukkah, don't do what my Christian contemporaries did when I was a child (and still hear on occasion); don't compliment the Jew on "their Christmas". Appreciate it on its own level, its ancient and varied traditions.

And have a latke. They're tasty.
Posted by Jeri Westerson at 5:00 AM

Jeri, my childhood experience was much like yours. We had one of those silvery aluminum tabletop trees with ornaments and hung up stockings (although in later years, my mother claimed she didn't remember doing this). We were told about Chanukah and encouraged to celebrate it only when we were old enough not to be so bitterly disappointed that it wasn't as much fun as Xmas.

As always, a very interesting and educational post. Thanks for sharing, and an early Happy Hanukkah to you.

I hadn't known about the Haggadah passage re: reclining like a free man rather than standing like a slave. Reclining was, of course, the Roman fashion. Couldn't imagine its coming to Israel before Pompey besieged Jerusalem back in 63 BCE, which marked the beginning of Roman dominance. Wonder now how, and why, it would start as early as Moses ...

Fascinating article, Jeri, thank you. Have a happy Hannukah!

Liz, we never went so far as to have a tree, but my mother did make a big deal out of Hanukkah, and I tried to do that with my son as he grew up. In fact, he still gets a kick out of it. (And my husband the Gentile does a good job of the Hebrew, I must say!)

Thanks for the information! As a descendant of Jews whose Jewish grandfather was disowned for marrying a Gentile, I've always been interested in Jewish customs and celebrations (albeit from a respectful distance).

This blog post reminds me of my first year in college, when a kosher-keeping Christian friend invited me to my first (and so far only) menorah lighting. The ceremony, though brief, was beautiful, especially since my friend gave me a running translation of the Hebrew so I sort of knew what was going on. I always appreciate an insider's perspective on these things.

My mother wasn't so good about explaining things. ("Why are temple services in Hebrew?" I'd ask. "Because God understands it better!" she'd say.) But I went out of my way to explain it to my son, since, for one, we never lived in an area where there were a lot of Jews, we never belonged to a temple, and I wanted to know the reason myself! For instance, every Jew has a Hebrew name besides the name they are known by. That way, wherever we are, God can find us and enscribe us in the Book of Life. Mine is Chaya Yehudit, which translates to Eve Judith, or Lively Jewish woman!