In 1986, when my husband and I visited Côte d’Ivoire, the West African country where I’d lived for two years as a Peace Corps Volunteer in the Sixties, we met a man with a unique job: the gardien des crocodils in then President Houphouet-Boigny’s home town of Yamoussoukro. Houphouet-Boigny had been involved in Ivoirien politics since the 1940s, became president when the country achieved independence in 1960, and kept a firm hand on its development until his death in 1994. But since then, the once prosperous nation, which produces much of the world’s coffee and cocoa, has been a mess.

At a recent meeting of the New York chapter of Mystery Writers of America, the speaker was a guy who investigates violations of international arms embargoes for the United Nations. He had much to say about Côte d’Ivoire and its border with neighboring Liberia, both nations under embargo that is “more honored in the breach than in the observance,” as Shakespeare put it. The country has endured civil wars and what the guy from the UN called “post-electoral crisis” in the past ten years.

But let’s talk about the crocodiles. 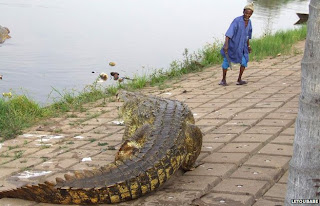 As we were taught in Peace Corps training, Houphouet was a particularly potent leader because he was a hereditary chief of the Baoulé, one of the most populous tribes in the country, as well as a European-trained doctor and lawyer and former member of the French Assemblée. When he turned what I remembered as a village on a dirt road halfway from Abidjan to Bouaké, where I lived, into the administrative capital, with massive buildings in which to conduct affairs of state and formal gardens and roads lined with palm trees, he included an artificial lake stocked with crocodiles and a man to tend them.

Crocodiles have a mythic role for Ivory Coast's largest ethnic group - the Baoulé, who live around Yamoussoukro.

The ethnic group of Houphouet-Boigny fled from what is now Ghana three centuries ago - and to cross a river, the river god told the queen to sacrifice her only child.

When this was done, the tribe was able to cross the river on the backs of hippos and crocodiles who lined up to form a bridge.

A Baoulé proverb says: "When in the middle of a river, do not insult the crocodile."

Dicko [the gardien] did not insult the crocodiles. Instead he had a reputation as their dedicated master and carer. Many said they could communicate with each other. Dicko made a regular show of pulling the giant monsters by their tail - posing for photographs next to a carpet of carnivores.

We didn’t see the tail-pulling or the sacrificial feeding of live chickens to the crocodiles when we visited in 1986. The monumental buildings and grounds were like a ghost town. (In the news, Abidjan is always referred to as “the commercial capital.”) As we made our way along one of the deserted streets and approached the lake, we saw the gardien, tall and skinny and, as James writes, “wearing the long-flowing boubou and with his rusty machete in one hand,” stretched out on the ground, taking a midday siesta.

When I essayed a timid “Ko-ko-ko” (the local equivalent of “Knock knock”), he got up and greeted us, asking if we wanted to see the crocodiles. “I’ll call them for you,” he said. He squatted on the ground at the edge of the lake and banged his machete a few times against the edge. For a minute, the lake remained placid. Then we saw ominous, leathery lumps with malevolent eyes set in them rising to the surface and slowly moving toward us. We skipped out of the way as several crocodiles, the biggest probably seven or eight feet long, heaved themselves out of the lake and waddled toward us.

Luckily, the gardien had them under control. He and his crocodiles coexisted with mutual respect for something like forty years. But sadly, one day in mid-August, Dicko Toki tripped and fell at the wrong moment, and in a flash, he was transformed from friend to dinner.
Posted by Elizabeth Zelvin at 3:00 AM

Fascinating! Liz, I never knew you were in the Peace Corps or that you'd lived in such a colorful place.

A good lesson in respecting boundaries!

Wonderful, and chastening story. And an interesting life, indeed.