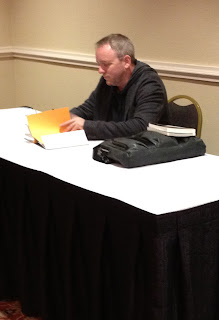 This week I heard Dennis Lehane speak to a packed hall—of librarians, not writers, at the New England Library Association conference.  I've crossed paths with him before, at the late-lamented Kate's Mystery Books in Cambridge, and at the New England Crime Bake, but I've never heard him give a speech.  Now I know what I've missed.
Lehane admits that he was an unlikely candidate to become a writer, based on his upbringing in some of the rougher parts of Boston.  But writing does not always emerge from book-learning, although he always loved reading, even when that was scorned by his classmates.  Or more precisely, male ones; the women found it appealing that this tough kid could quote Shakespeare and actually write books. That alone was a good incentive to pursue a literary career.

But I don't intend to write a biographical tribute to a writer, even one I admire.  What pleased me was I can still learn something about what makes a writer, and Lehane made his case convincingly.

The part of his talk that resonated most with me was Lehane's description of his (large) Irish family and how they interacted with one another.  The members of the extended family (if I heard it right, his father was one of 17 children, his mother one of 14) all spent a lot of time together when he was growing up, and they, or at least the men, were all prodigious tellers of tales.  Moreover, those tales were often repeated within the family gatherings (Lehane estimated about every five to six weeks the story cycle would begin again).  But what was noteworthy to him was that the tales changed with each telling, just a bit, as they were polished and honed with repetition.  Now, you'd think that family members who had heard the same telling dozens of times before would notice this, but the important point was, it was the telling of the story that mattered, not the truth of it.

And that statement says so much about Irish tradition, or at least what I know of it.  The Irish people have a long tradition of oral storytelling.  The seanchaí  fulfilled a dual role as both storytellers and historians—guardians of a culture that was often imperiled by British rule. Some may have been the designated member of a given clan or family (remember, families in Ireland in the 19th century or earlier seldom strayed far from their origins, so effectively they functioned as an oral archivist); others were itinerant, and offered up entertainment, given a meal and a place to sleep as they passed from townland to townland, in exchange for their stories.

Is the art—or craft?—of this storytelling an historical artifact of a dwindling culture, or it is something innate in the sons and daughters of Ireland?  Lehane didn't address that issue, nor did he wax eloquent about his literary heritage.  Instead, what he took away from all those family gatherings (and later, gatherings of like-minded strangers in friendly bars) was the love of words, of the spinning of a tale, of drawing in an audience who had heard it all before and making it new for them. I'll let you decide whether he used wisely what he learned (I'd say yes!).

There was a period when the oral tradition was essential because the bad-guy Brits forbade the Irish to go to school--just as lilting (the diddle-dee-dee stuff) was a response to the banning of musical instruments. BTW I just learned that Lehane has become a publisher with his own imprint at HarperCollins. His first pick is what sounds like a literary mystery by African-American writer Attica Locke. Did he talk about that, Sheila?

No, he was not in promotion mode (although his most recent book is just out), nor business mode. He was talking anecdotally about what shaped him as a writer--and why Shutter Island feels so different from his other works.

Very interesting. Out of all the more recent authors I've taken a liking to, Lehane is one I'd most likely like to have a conversation with. He seems as if he'd be both intense and insightful. As for a tradition of Irish storytelling, the term Senachai means storyteller (in most cases, a travelling storyteller who told his tales for food), but in many Irish families there is one in particular who is the keeper of the tales. They bring along the stories, the histories and the people for the next generations. My Uncle Warren held that post until he passed last year. Now, it's up to me to hold onto the history and our stories. It's an honorable post.

What an interesting post, and how awesome that you got to meet Dennis Lehane.