Kittehs on the Interwebs

By Sandra Parshall
Oh hai, cat peeps.
Have you had your LOLcats fix for the day? How many cat pictures and videos have you seen since you sat down at your computer this morning? How many have you shared on Facebook in the well-founded belief that an audience of staggering proportions will be enthralled?
We can’t get enough of kittehs on the interwebs.
I suspect none of us was surprised when Google's network of research computers, programmed to recognize the most important internet content based on 10 million randomly chosen YouTube videos, came up with this picture of a cat. 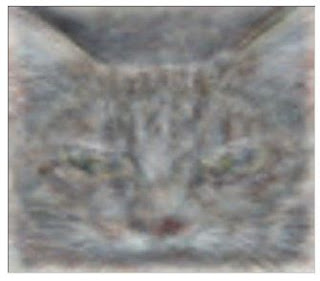 We always knew they would take over the universe if we slipped up and cleared a path for them. The internet is that path. And we slipped up big time: humans have been reduced to the role of publicity agents. As with meals, cats couldn’t have done it if we weren’t around to open the can, so to speak, but the real power lies with them and they know it.
I just typed “funny cat pictures” into Google and in 0.46 seconds I received a list of 49.2 million sites. “Funny cat videos” generated more responses in less time: 69.5 million in 0.37 seconds. One gets the strong impression that Google’s search engine is used to answering these queries and stands ready at all times to shoot an emergency day-brightener to the computer of anyone in need.
The most famous cat on the interwebs, the one who can be credibly accused of starting it all, is Maru, a stout-bodied Scottish fold tabby (whose tiny ears stand straight up instead of folding) who resides in Japan. Maru’s thing is boxes, or, really, almost anything made of cardboard or plastic that he can use as a container for the aforementioned stout body. With wild abandon or careful calculation, depending on his mercurial feline mood, Maru jumps into boxes, jumps out of boxes, runs and slides into boxes, maneuvers boxes around the floor from within. The recently posted Marulympics featured only one athlete, Maru, doing only one thing, and you can probably guess what it was. He finished with a slew of gold medals.
Maru (whose name means “circle” or “round” in Japanese and is quite fitting) is so famous that he and his female owner live in an undisclosed location. They occupy a home purchased with Maru’s website advertising and photo book earnings. Maru has an entry in Wikipedia. Maru is one of YouTube’s brightest stars, with his own channel. He and his boxes are regularly featured by the Huffington Post. You could spend a month doing nothing but watching The Best of Maru. Journalists can’t get anywhere near him, as Gideon Lewis-Kraus discovered when researching an article on internet cats for the September issue of Wired magazine. All he wanted was “thirty minutes with the cat” but “months of obsequious email courtship” of Maru’s owner failed to gain him an audience.

What makes Maru so special? Darned if I know. Maybe we enjoy getting a concentrated dose of the cute things our own cats do on those rare occasions when they're awake and on their feet. Perhaps Maru only does cute stuff for the camera occasionally too, but any cat will look lively and athletic with proper editing.
If Maru has been the leader, we have seen no lack of followers. Every cat owner in the world seems to have a digital camera and video recorder and an irresistible urge to share the latest bit of adorableness from Kitty Sweetums with the world. If you’ve ever seen my Facebook page or my Flickr photostream, you know I’m as shameless as the rest about putting pictures of Emma and Gabriel out there. (Emma tends to be the funnier one.)
So what is it about cats? They’re inherently funnier than dogs, and kittens are far wilder and more inventive in their mischief than puppies. Cats can jump and climb and work their magic on many levels. Dogs are pretty much rooted to the floor, doing little beyond the occasional shredding of magazines and sofa pillows, which I assure you is not cute.
But it’s not just feline cuteness that we go for. Well, maybe some shallow people demand all cuteness all the time, but I think most of us are looking for catness. A surly expression on the face of a battle-scarred old tom can captivate us as readily as the big eyes of a two month old kitten.
Are we attracted to their essential wildness, that untamed soul within the cutest of kitties? Dogs can be funny, certainly, but there’s always something forced about it, as if the animal expects to be rewarded with a treat. When we see a video of a dog playing the piano, we think, “Yeah, sure, a dog will do any trick to please its owner.” When a cat plays the piano, we know beyond doubt that it was the cat’s choice, the cat’s idea, and we marvel. Dogs, in short, allow themselves to be trained, so there is nothing natural about their cuteness beyond the puppy stage.

A popular subcategory of cat videos features cats playing tricks on or stealing food from dogs who are TSTL. (Watch it and weep.) We may love sweet doggies, but we recognize the biological truth embodied in these videos. Dogs are servants by nature, always laser-focused on their people. Cats exist to be served, and the supreme being in any cat’s life will always be...the cat. We may laugh at them, but we do it while bowing to their superiority. 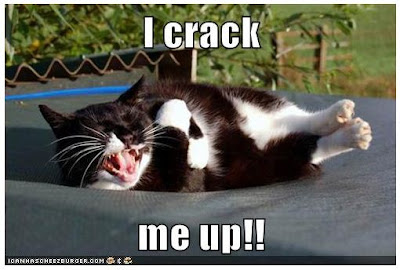 Would you like your own cute cat – or dog, if that's all you've got – to appear in the Rachel Goddard novel I’m writing now? Go to my Facebook author page and post a photo of your pet. (“Like” the page first if you haven’t already.) The pet whose picture gets the most “likes” will be given a role in my work-in-progress, and the owner will receive a signed copy of my new book, Bleeding Through.
Posted by Sandra Parshall at 3:00 AM

We're all doomed to serve the furry masters and I'm right there in the thick of it. Can't start my day without the Cheezburger and Lolcats feeds, not to mention a few others, and they never fail to make me smile. That must be the secret of their world domination scheme ;-)

I'm sure observant space aliens could draw all sorts of interesting conclusions based on our internet fascination with cats. A recent ABC news poll reports that dog owners still outnumber cat owners (although cat owners seem to have more pets per household), and cute cats dominate the media. What're the demographics? Gender, age?

From my own perspective (as slave to three cats), I can say I'm drawn to cats everywhere. I can be in a foreign country, admiring some isolated ruin, and a cat will show up and sit on my lap. I have the pictures. Should I tell them they've already got me?

I agree completely. There's just something about cats that draws me. One of my pet peeves-- no pun intended-- is that when I read a magazine like Cat Fancy, every other breed description says "This is a nearly dog-like breed." If I wanted a dog, I would get a dog!

Cats seem to draw very strong emotions both positive and negative. I remember reading once that you few people are indifferent to cats: you either love them or hate them. I think there's some truth to that, for whatever reason.

I also hate seeing cats called dog-like. I want cats to act like cats. People who dislike cats usually say it's because they're "too independent" but that's why I love them.

Of course, some people think they're evil, but I only see occasional evidence of that. :-)

Ruff the Cat won gold in the ball & string event and the cork event. (We got new cleaning people recently, and I had to explain: no, we're not wild winos who leave corks all over the house. Synthetic corks make great cat toys!

I admit it-I spend lots of time loling at lolcats! I have 3 cats of my own-Seneca, Aleister, and Calumet, and am in the midst of adopting another. Unfortunately, the poor little guy is having some health issues-so the shelter is waiting to release him. I also have a dog, 5 rats, and a horse.

I'm a dog person but I freely admit cats are funnier to watch.

Maru's success proves that with the right cat and the right social media, you've got yourself an annuity :)
My cat Spenser (named after you know who) makes me laugh on a daily basis. My favorite of his antics is the way he sails across my wood floors underneath a large sheet of brown packing paper. Can a paid-up mortgage be far behind?

Delightful column, Sandy. No one writes animal-world better than you.