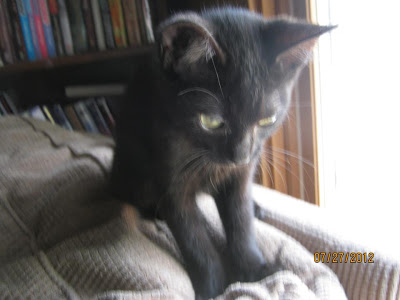 The little fellow in the picture has been christened Panther; indirectly he lives at my house because my son got a job this summer.  You see, in order for me to take my son to work, I had to pass the window of the Humane Society, where a variety of kittens is always on display (and ever changing).  Somehow, seeing the kittens each day--sometimes many times a day--must have worked on my subconscious, because by July I was telling my sons that we should give one of them a home.

By last Tuesday we were sitting with an adoption counselor, going over paperwork and viewing all of the kittens.  By Thursday, we had returned to pay our donation and to sign our pledge to care for our animal, to not let him outside, not declaw him, not deprive him of veterinary care, etc.

And now we have, in essence, a baby in the house. Like my own children when they were babies, this kitten enjoys sleeping between my husband and me.  He also enjoys waking me up at six in the morning by putting his nose in my eyeball, over and over, until I agree to stay awake and play with him.  He enjoys jumping and climbing and meowing.  He is VERY talkative.  He purrs loudly at the least provocation.  He wants to be with our other cats, but they don't yet respond to him, so he lives in his own little room, waiting.  He's quite adorable.

According to the ASPCA, at least one third of all cats are acquired as strays. Panther and his five sisters were abandoned kittens; nothing is known about their mother. The ASPCA also notes that, while "5 to 7 million companion animals enter shelters nationwide every year . . .  3 to 4 million of them are euthanized."

My husband would be the first to tell you that we didn't need another cat.  We had three already, along with a noisy beagle.  Yet I couldn't help but feel that we had room for another one, and that one of those kittens in the window could be given a chance to roam around an entire house with some playmates.

As I write, Panther is attempting to make corrections by running across my keyboard. It's actually pretty annoying, but I can't get mad at his little face, which he well knows.

If you're considering adoption yourself, know that "owned cats and dogs generally live longer, healthier lives than strays."  I don't suppose we need the ASPCA to tell us that, but it's still a good reminder that adoption is worthwhile.
Posted by Julia Buckley at 12:00 AM

So adorable! Someday, I'll start adopting again but the one cat I have now has earned her spot at being alpha---the only way she can be alpha is to be the only cat ;-)

Lelia, I guess you'll know when that time comes around. What a lucky cat you have, though. :)

Thanks, Gayle. It's been fun.

Panther is a lucky little boy! I wish we could have another, but our Abyssinian Gabriel turns murderous at the very sight of another cat that isn't his adopted sister Emma, and because he has multiple health problems and is 10 years old, we can't put him through the stress of adapting to a new cat in the house. The rest of us don't want to go through that ordeal either. I hope your older three and Simon the beagle will accept Panther quickly.

That makes sense, Sandra. And yes, I hope the adapting is quick, because I feel bad locking him in his own room. He's mewing in there right now. :)

But the others seem a little less freaked out by him today.

I'll be adopting soon... once I get that pesky thing known as 'vacation' over. I want to be sure to have lots of time for the new little one!

That's great! But it's good that you'll have vacation, too. Enjoy it.

Awww, what a sweetheart. I've been yearning to add another cat to the family. I already have 3 cats, a dog, 5 rats, and a horse...but I feel I can provide a home for another needy animal too. I've decided to wait til next Spring though-to try and get the house in better shape. It doesn't stop me from looking at all the shelter/rescue animals in need of homes, however.

This is just adorable! Your description brought tears to my eyes - give Panther a big hug for me! Thelma Straw in Manhattan

OMG, he is SO cute. He looks like my Misty (who is now 2 and was also a rescue).

Congrats on your new baby and giving one very lucky kitty a good home.

Thanks, Cathy and Thelma!

Kat, let us know when you end up adopting! Sounds like you have quite a houseful, too--but there's always room for one more, right? :)

I've always had rescues, both dogs and cats - and mostly at the same time. A year ago March I lost my 11 year old wonderful Russian blue cat to cancer. Then a couple of months ago, my beagle also had to be euthanized. Which leaves me with my 12 year old whippet (I think) whom I adopted 3 years ago. She loves cats and I would love to get one, but it will have to be both older (I'm 65 and don't want an animal who will outlive me with no one who could take it) and like dogs. Sigh. I WILL find a fit.

Diane, older animals need adopting, and they tend to not be as popular as babies. Many make wonderful companions. If you decide to go that route, I think you'll be very pleased.