Seeing as I am half-Irish, I put a certain amount of faith in what is often called "the luck of the Irish."  That doesn't quite capture the essence—it might better be described as "serendipitous coincidence." Or to put it much more simply, in Ireland, things just happen.

For example, the first time my husband, daughter and I traveled to the small village (when I say small, I mean about 200 people) in County Cork near where my grandfather was born, we had no reservations and only the sketchiest of plans.  We intended to stay only one night, and when we arrived it was pouring rain and getting dark.  One hotel, with eight rooms—all filled, because it was fishing season.  The proprietor kindly recommended…not exactly a bed and breakfast, but a home that had two rooms that the owners rented out.  They relied solely on word of mouth to fill those rooms, and didn't seem much worried if they didn't.

They had a room for us.  No sooner had we set down our bags and explained why we were there than the landlady said, you must talk to my mother-in-law, who had just stopped by.  Turns out she knew my family from years ago, particularly one great-uncle, who had lived in the family house until the 1950s.  Memories are long in Ireland.  But that wasn't all:  the landlady said, oh, I have a cousin who you should meet.  Who of course turned out to be my second cousin, who had been born in that family house, and who arrived the next day bearing a four-generation family tree.  See what I mean? Serendipity. The trip I made last year, supposedly for research purposes, didn't turn out quite as I had intended, thanks to missing a step in a church, but it was enjoyable anyway.  Despite a trip to Cork University Hospital, I was still pursued by that strange luck.  We had rented a cottage through an internet agency, based largely on the fact that it was about a mile from where my grandfather had been born.  It turned out to be a delightful house (if you're ever looking for a peaceful vacation in a beautiful part of Ireland, this is your place—sleeps eight and comes with all mod cons, including a Jacuzzi and a wet bar). 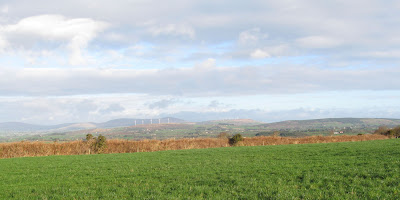 But there was one of those small examples of luck that I wanted to talk about.  The house was lovely, set in the midst of fields, on the site of a long-gone farmer's cottage (the current owner spontaneously gave me the entire history of the property going back to the mid 19th-century—and yes, it was owned by a Connolly), with endless views of rolling hills.  There were fences dividing the fields, and along one of those fences was a lone tree. 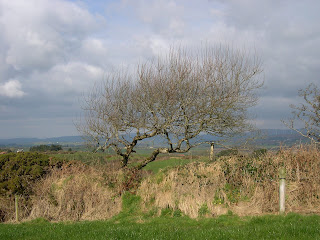 For some reason I was drawn to that tree.  It was visible from the spacious kitchen where I spent a lot of time with my foot on a chair, admiring the view.  I took pictures of it, and I insisted that my husband get a close-up before we left.  I put the image on a business card, and then I didn't think much more about it until I got to talking with an Irish short-story writer at a local Irish festival recently, and he said, it's a hawthorn tree.

You see, the hawthorn occupies a particular place in Irish folklore.  It's known as the "fairy tree." Even in modern Ireland, some farmers plow a wide circle around a lone hawthorn tree, so as not to offend the fairies that inhabit the tree (heaven help you if you should cut one down!).  It was said that placing a sprig of hawthorn in your milking parlor would make the cows produce more and creamier milk.  It's also said to be found near holy wells and ringforts. It's a herald of spring; its scented flowers attract bees, and its berries sustain birds.

My grandfather was born over the hill, in a townland named Knockskagh.  Which translates as Hawthorn Hill.

And that's what I love about Ireland.  The fairies are calling me.

This post was so interesting! And very apropos as I'm writing a trilogy set in Ireland and there are faeries involved.
Really looking forward to the new series!

I loved reading this, Sheila. Your Irish series is surely giving you more than you ever expected, and the first book isn't even published yet. I hope you'll make more trips to Ireland, and that your broken ankle was a one-time thing. :-)

A wonderful article, Sheila. I read your earlier reports on your "missed a step in a church" trip and thought, oh, interesting, maybe I should give this series a try sometime.

But this story ... the way you're drawn to the hawthorne tree ... this story sings. This story flies. It tells me Ireland is in your blood, not just in your genealogy.

And, now, I'm heading over to Amazon to see about that first book. Now, not sometime. [pause] click Done.

We have several hawthorne trees in our yard. The bear cubs love them -- they're too spindly for the adults to climb. Hawthorne is a heart tonic, which we've prepared several times. The berries smell great cooking!

Would love to win a signed Jeri book!