A Reflection on the Missing 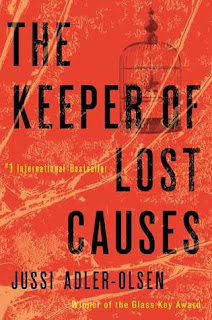 I'm reading a fascinating book, hyped as the new thing for Stieg Larsson fans, by Danish writer Jussi Adler-Olsen.  I'm only a fifth of the way in, but even at this point the book is both compelling and thought-provoking.  Here's the Amazon blurb:

"Jussi Adler-Olsen is Denmark's premier crime writer. His books routinely top the bestseller lists in northern Europe, and he's won just about every Nordic crime-writing award, including the prestigious Glass Key Award-also won by Henning Mankell, Stieg Larsson, and Jo Nesbo. Now, Dutton is thrilled to introduce him to America.
The Keeper of Lost Causes, the first installment of Adler- Olsen's Department Q series, features the deeply flawed chief detective Carl MØrck, who used to be a good homicide detective-one of Copenhagen's best. Then a bullet almost took his life. Two of his colleagues weren't so lucky, and Carl, who didn't draw his weapon, blames himself.
So a promotion is the last thing Carl expects.
But it all becomes clear when he sees his new office in the basement. Carl's been selected to run Department Q, a new special investigations division that turns out to be a department of one. With a stack of Copenhagen's coldest cases to keep him company, Carl's been put out to pasture. So he's as surprised as anyone when a case actually captures his interest. A missing politician vanished without a trace five years earlier. The world assumes she's dead. His colleagues snicker about the time he's wasting. But Carl may have the last laugh, and redeem himself in the process.
Because she isn't dead . . . yet."
The bad thing about this book is that it taps into one of my many anxieties: worrying over the imprisoned.  That's right--I think about that stuff.  When I see windowless vans, I always ALWAYS wonder if someone is inside.  When I take walks and observe darkened basements or weird windows covered by cardboard or blankets, my mind worries.
Now, you might assume that I've read too many mystery and suspense novels--and I probably have--but this book is a reminder that people are missing.  A lot of people are missing.  And every police department has cold case files of people who were never found.
Here are some statistics JUST for American children (from the center for Missing and Exploited Children):
There is good news.  According to the same website, AMBER alerts have helped with recovering lost children:
"Since 1997 through March 2012, the AMBER Alert program has been credited with the safe                     recovery of 572 children. To date there is a network of 120 AMBER Plans across the country."
Hopefully, Internet technology will make the number of missing persons less daunting as time goes on.  Perhaps the very things we find intrusive about an online presence can also have a positive effect in helping people be safer.
In the meantime, I will keep reading this book, because I'm hoping for a happy resolution.
Posted by Julia Buckley at 12:00 AM