This past week federal prosecutors released hundreds of page of evidence used in the recently-concluded trial of Catherine Greig, the woman who accompanied notorious Boston gangster on his flight from prosecution, and stuck with him in hiding for more than 16 years (talk about "stand by your man"!). 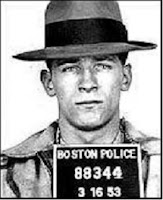 If you're not familiar with Whitey Bulger, you've been living on Mars, or outside the greater Boston area (may be the same thing).  I've lived in the far suburbs of Boston for the past nine years, and for another eight in the '70s, so I must have absorbed the story through my skin, one way or another (no, I am not related to John Connolly, the disgraced FBI agent who allowed Bulger free rein to kill, extort, etc., while supposedly using him as a confidential informant).


But what I found interesting about the news story this week was that the main photograph (Boston Globe, Metro section, above the fold) was not of either of the protagonists in this drama, but of Whitey Bulger's bookshelf. 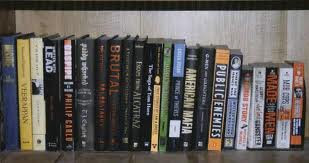 If you want a good timeline for the whole sorry Bulger mess, read Thomas J. Foley's recent book, Most Wanted.  Foley was a member of the Massachusetts State Police, and he stuck with the case for a large portion of his career.  Regarding Whitey's reading habits, Foley writes that during Whitey's sole stint in prison (Alcatraz), Whitey read, "just about everything in the prison library.  He pored over the major battles of World War II, scrutinizing them both from the viewpoint of the Allied general and from that of the Nazi commander."  He learned from everything he read, and then he applied it well (if his goal was to seize power in Boston's criminal underworld and terrorize anyone who stood in his way).


My point?  This was an intelligent man, who read books and made use of what he learned from them.  He followed newspaper reports, from his cozy apartment in Santa Monica, two blocks from the sea.  He collected recordings of such shows as America's Most Wanted.  He kept tabs on what was happening in Boston, on how he was depicted in the press, and on what his former associates were saying about him (in and out of jail).  He boned up on search procedures, the better to evade detection, all the while stockpiling weapons and cash in case the FBI caught up with him.  They didn't, for 16 years, even though he was living in plain sight in a rented condo.


And this man was an amoral murderer who enjoyed the act of killing.


Why is it that I want to believe than someone who felt no compunction about taking the life of anyone who stood in his way or posed a threat to him, including former colleagues in crime, couldn't possibly also be smart and analytical? Clearly he planned his strategic ascent to power years in advance, and he carried out his plans without compunction.  On another front, he had two lady friends, and when one balked at going on the lam with him (while refusing to give him up to his pursuers), he had a back-up ready—Catherine Greig, who stuck by him faithfully until they were both captured.


Whitey's trial is scheduled for November, if all goes as planned.  No doubt the papers will be full of the testimony; no doubt there will be further revelations, and we all watch in horror.  How often do we get to witness evil, in our own back yard?


Wonder what he's reading in prison now?
Posted by Sheila Connolly at 12:15 AM

I didn't know anything about him until he was arrested, and then I read everything with great interest. What a bizarre and fascinating case (and person).

I hate reality tv, but I do enjoy watching the trials of high-profile criminals--does Boston allow televised trials?

He looks like a gangster out a 1930s black and white film. Too bad he hasn't used his intelligence for a better purpose.

I always hoped he had some information on the Isabella Stewart Gardner Museum heist and what happened to the stolen art. His name has been connected to it. I'd love to see those masterpieces back in their empty frames.