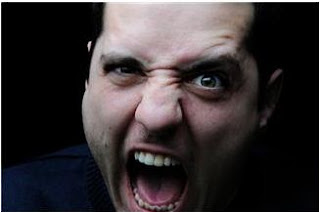 My characters are tough so I won’t have to be. Rachel Goddard stands up for herself and for anybody, or any animal, who needs protection. Hurt her or somebody she cares about and you’ll be sorry. Tom Bridger is a no-nonsense cop. If you know what’s good for you, you’ll show him some respect. Rachel and Tom’s creator is a wimp.  I’ll do something if I see an animal or child being abused, but I’m not so good at standing up to people who bully me. Even online, or by e-mail, my responses to nasty people are sadly lacking in snark factor. I long to be like Rachel or Tom, instead of always being the type who thinks of a stunning, unanswerable rejoinder 24 hours too late.In hopes of improving my skills, I devoured an article in the June issue of Psychology Today with the title Difficult People: How to handle whiners, manipulators, bullies & more.Straight off, I was discouraged. The lead-in to the article warns “there’s evidence that some types of troublemaker are on the rise.” Just what the world needs – more nasty people.The article’s author, Hara Estroff Marano, accurately pinpoints the way a lot of these people operate. They provoke us. They drive us to the limit of our patience. They keep it up until they get a reaction – then they give us that “What’s wrong with you?” attitude that makes us doubt ourselves and feel guilty because we behaved badly. It’s the emotional equivalent, Marano notes, of being mowed down by a hit-and-run driver.I was reassured by Marano’s advice that it’s best to simply avoid the people who make us feel bad. That’s what I do, as much as possible, not out of wisdom but out of cowardice. I’m profoundly grateful that I don’t have to work in an office, where I would be forced to spend time around people I might not like. But we can’t always walk away. Sometimes we have to deal with troublesome people, whether we want to or not? So how should we handle them?Marano offers handy classifications for these banes of our existence: the hostile (includes bullies); the neurotic; the rejection-sensitive; the egoist. All have one trait in common: they care only about themselves and are not interested in anyone else’s feelings. And the rest of us need one trait to deal with them: emotional maturity.Most of us have had friends who fit the definition of pessimistic, anxious, negative neurotics who can’t let anyone enjoy life. They’re worriers. They want to help you by detailing every awful thing that might happen on your vacation or by making you see that your success is just a sham. I’ll admit that I slip into this pattern myself sometimes – but I aim my pessimism at my own life, nobody else's. Still, I understand how tiresome it is to try to reason with people like this.Bullying, hostile people are all around us, wherever we go, including the internet and chat groups. And who among us has not had a bully for a boss at one time or another? They verbally abuse us, try to control us, and humiliate us in front of others. If we react, our jobs are in peril. Another type of bully is the colleague or supposed friend who is nice to your face but does everything possible to undercut you. Marano recommends a calm confrontation. I know I could never do it. I will always prefer to stay silent and walk away.The rejection-sensitive clingers are incredibly annoying but so pathetic that we hate to hurt them. Their constant emotional demands can become overwhelming. They want all of our attention, and they want it immediately. Some of these people become stalkers. Unfortunately, this type of behavior appears to be on the rise. So what can we do when we have to deal with annoying people? We can control our own reaction. Stay calm. Hold ourselves aloof from the other person’s one-man show. Walk away from bullies and people who are always angry.And take notes. These people make great characters.Do you have annoying people in your life? How do you handle them?
Posted by Sandra Parshall at 3:00 AM

I think we as writers are very lucky: we can skewer the nasty people on a page (they'll never see it, but it makes us feel better) and we can create protagonists who are smarter, braver, wittier versions of ourselves. We learn from doing both.

I, too, have "punished" the evil people in my life by putting them in stories, but I'm also pretty wimpy about confrontation in real life. When I worked outside of home, I almost became physically sick at having to constantly deal with the types you mention. My daughter finally bought me a book called *Dealing with People You Can't Stand*, which outlined ways to react and explained what these people want/need. It helped, but I agree with you, Sandy--avoid whenever possible!

I'm not a confrontational person either, so I tend to walk away if only for my sanity and if they persist in annoying me, I remove them from my life and amazingly life is better for it.

I think most bad behavior comes from fear or from a family culture of aggressive negotiation. The internet world puts communication out there unmoderated by tone-of-voice. I try to read angry-seeming communication with a kind or questioning tone of voice if I don't have tone-of-voice to guide me. If I can, I tell them how I disagree and try to negotiate. Past that, I try to let it be their problem and I walk away. I'm less of a wimp as I get older. Something about losing your inhibitory neurons.

Sandy, this is a topic that had needed to be aired. Thank you! I am also one who hates confrontation - I try to be a peacemaker until I am pushed against the wall by a few people who feel they have the liberty to dash out their own pathetic frustrations on me. I do have the ability to fight them back, but it is not worth the fight. This is one reason why my villains are such strong characters in my books! Thelma Straw

Confrontation is exhausting, and even if you "win" you'll feel rotten about the whole thing. Trying to talk people out of their bad habits is pretty much pointless anyway.

When the nasty person you've encountered is a stranger, I think the only safe thing you can do is get away as quickly as possible. You never know what an angry stranger will do.

I'm still stuttering over an elevator encounter during the Western Writers of American convention in NM a couple weeks ago. Going up, a couple women glanced at my name tag and one said, "Huh. Western writers." Her lip curled. "Big deal. We're fire fighters. We live the life. You just write about it." I didn't say anything--Hey! There were two of them,remember, and they were both bigger than me. The aggressive attitude definitely put me off but believe me, that one is going to turn up in one of my books, maybe as the murder victim.

@Ms Shiela, indeed and us readers were truly lucky as well to have wonderful writers in this sphere.
No doubt~ you guys were always at your best.