This past weekend I realized a long-cherished dream:  I went to the Antiques Road Show in Boston (and I might, just maybe, appear on the Road Show next winter sometime, because I taped a segment with one of the appraisers, but there are no guarantees.)

The filming of the 16th season is taking place now, to be aired in 2013.  The show originated under the auspices of the public radio station WGBH in Boston, and is one of their most popular and enduring shows.  And I've been watching it from the beginning.

But there's more to the story.  In the late 1990s and up until 2002 I worked as a "Researcher for Hire" at The Historical Society of Pennsylvania in Philadelphia. One day I fielded a request from one of the producers of the Road Show, who had acquired a sampler (as a result of a Road Show appraisal that he did) that came from Pittsburgh, and I was asked to find out as much as I could about it. I remembered the episode because it represents every viewer's favorite fantasy:  a couple moves into a house they've just bought, and in cleaning out a closet they pull out what they first think is a rag from the back of a closet.  It turns out to be an early 19th-century sampler valued at over $25,000. Don't you all wish?


The research relationship with the producer continued for several more projects over a couple of years, and we kept in touch occasionally. Then that original episode from the show became a central part of my most recent Orchard Mystery, Bitter Harvest.  Of course I acknowledged the show and the producer in the book.

Which in turn led him to get in touch with me and mention that the Road Show would be filming in Boston this year and would I like to go?  Uh, yes? And that's how I ended up with guest passes for myself and my husband for this past weekend. (BTW, those guest passes took us to the front of the line, which, when there are over 6,000 people involved in the day-long event, makes a real difference!) 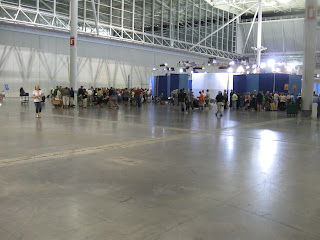 I love to see how things work, and I love to see what goes on behind the scenes, so I was a happy camper.  I had never analyzed the mechanics of filming the show.  The short course:  they set up a more or less circular perimeter of hanging curtains with signs identifying the appraiser stations.  The long lines wait outside the curtains, and people with items (at least one but no more than two) are allowed in a few at a time (and then usually hustled out after their quick appraisal).  But what I'd never figured out is that the camera equipment occupies the center of the circle, so it can pivot from one table or stand to the next.  Efficient!  There were four or five cameras (not including the handheld ones for peripheral taping).


And so the fun began.  My husband and I brought three items:  a silver trinket, a commemorative sword that was presented in 1895 to my great-grandfather, and a lamp—or more precisely, an exceedingly heavy cast bronze lamp base that had been in my family since it was new, I think.  It's the lamp that's next to the chair my husband likes to sit in when he watches television.


And no doubt you can see where this is going: it's from the Louis C. Tiffany Furnaces in New York, ca. 1920 (the Furnaces closed in 1924).  It's not from the gorgeous glass shade era, but it's still a nice piece—and still worth less than my car, which is the dumb statement that came out of my mouth when the appraiser told me.  The lamp, after its excursion and fleeting fame, is now back where it started from, next to the chair.  I did not say the infamous words, "oh, I'd never think of selling it—it's a family heirloom." Both of which happen to be true.  I love it because I know who bought it, it's nice to look at—and it's too heavy for the cats to knock over, even if they work together.


Six thousand people—including, the mayor of Boston, who I suddenly recognized from about ten feet away—trooped through the set-up in one day (BTW, while it may air as three one-hour shows, it's all taped in one day; host Mark Walberg changes clothes in the Green Room between intros).  Most of what they carry is, uh, mainly of sentimental rather than financial value.  I can't imagine being an appraiser and seeing hundreds upon hundreds of items pass before them, most for only a minute or two, most of them forgettable.  I can say that it's obvious when they see something they like, because their ears prick up like a cat's and they get very busy on their computer, and then they call in someone else to consult, and then they call in a producer, and then … there you are in front of the cameras, trying not to make a fool of yourself.  It can happen!

What I love about this is the arc of the story:  one show I happened to watch in 1999 led to a couple of years of interesting research, and then to an entire book, and now a possible segment on television.  Ain't life grand?

That is so cool and I'll be on the lookout for your episode (crossing fingers it is shown).

I really enjoyed reading this post although I'm not a person who watches the show or even deals with antiques. But how one thing leads to another is what interests me. And I enjoy your sense of humor. Thanks!

That is too cool! I watch those shows all the time, and every time I look around our house, thinking, "Naw. There's nothing here worth a damn...in money. Sentimental and cool factor value, yes.

Great information.Thanks for sharing this useful information with all of us.Keep sharing more in the future. Have a nice time ahead.