I’m a sucker for romance. While I don’t read straight romances, my favorite reads tend to include a satisfying love story along with great writing, smooth storytelling, and—a crucial element for me—endearing characters of depth and complexity. At the top of my list is Lois McMaster Bujold’s Vorkosigan saga, started with a great love story (Cordelia and Aral Vorkosigan) and then took a leisurely arc of seven or eight books and more than a decade in fictional time to find Miles the perfect mate. Diana Gabaldon’s Outlander series and Dorothy Dunnett’s Lymond series are on the list: complex historicals brimming with excitement and a touch of magic, both with extraordinarily charismatic heroes who find (immediately or eventually) a larger-than-life Big Love. In the Dunnett books, the ultimate heroine is only ten years old when she and the hero first meet. In mysteries, I’m particularly fond of Julia Spencer-Fleming’s Rev. Clare Fergusson and Russ Van Alstyne and Margaret Maron’s Judge Deborah Knott and Dwight Bryant (both brilliant examples of the traditional amateur sleuth with a law enforcement partner). In the first case, it’s love at first sight and obstacles to overcome in book after book. In the other, Maron herself has said when she started the series, she had no idea that Deborah and Dwight would fall in love.

In the past, I’ve said that it’s ironic that though I love romantic stories, I didn’t write one. Now, reviewing my literary role models, I can see that I was instinctively falling into the pattern of allowing the protagonist’s love story to unfold slowly over the course of a series arc. In the case of my protagonist, recovering alcoholic Bruce Kohler, it was not a matter of building the tension, peak after peak, in one evolving relationship, as Julia Spencer-Fleming does so brilliantly. Rather, like Miles Vorkosigan (if I dare to mention my own work and the dazzling Bujold’s in the same breath), Bruce has a lot of growing up to do before he can choose the right mate.

The theme of my mystery series, recovery from alcoholism, codependency, and other addictions and compulsions, gave Bruce some very good reasons not to have a girlfriend. The first book, Death Will Get You Sober, started with Bruce hitting bottom in a detox on the Bowery. 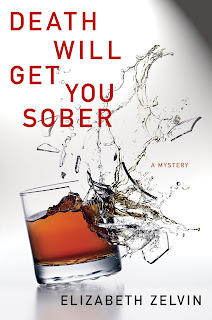 I’ve worked with a lot of homeless alcoholics, and believe me, most of them are not thinking about romance. Survival and getting the next drink takes all their attention. When Bruce gets to AA, he hears, along with “Don’t drink and go to meetings,” that he’s supposed to have “No relationships for the first year.” (I have had clients who had the illusion that meant that one-night stands were okay, as long as they didn’t get emotionally involved. But that’s another story.)

The secondary theme and subplot of the series, Bruce’s friendship with his two sleuthing sidekicks, his best friend Jimmy and Jimmy’s girlfriend Barbara, also supported Bruce’s lack of a love interest in the first book. Bruce has deeply disappointed Jimmy and Barbara, and a big part of his motivation for staying sober and solving the murders is to give the friendship a second chance. There’s a lot of love in this triumvirate, and some readers noticed a teeny bit of sexual tension between Bruce and Barbara, though it was essential to the story I wanted to tell that this would be resolved harmlessly at the end of the first book.

Bruce actually had a girlfriend in the manuscript I intended to be the second book of the series, which was rejected by my publisher at the time. Bruce is still fairly new in sobriety. Jimmy and Barbara are taking a weekend couples workshop, and Bruce tags along. The obnoxious relationship guru is murdered, and Bruce promptly falls for his widow. But this relationship has nowhere to go, and it’s apparent throughout the story. 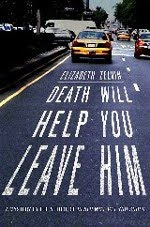 This left Bruce free to get a crush on another murder suspect, the girlfriend of the drug dealer victim, in Death Will Help You Leave Him. He also had to break free from his crazy ex-wife, which meant dealing with the destructiveness of their relationship and his own codependency issues, love issues, rescue fantasies, or whatever you’d like to call them.

In the new book, Death Will Extend Your Vacation, Bruce and his friends take shares in a clean and sober group house in the Hamptons. 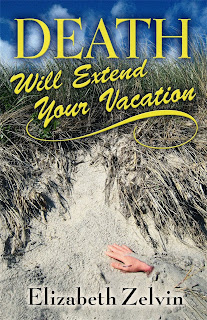 They’ve just arrived when they find the body of one of their housemates on the beach. It takes two more murders and the whole summer for them to figure out whodunit. In the meantime, Bruce is very much attracted to one of his housemates, the self-reliant and enigmatic Cindy. He’s ready now, but things keep getting in the way. It’s also a new experience to negotiate the landmines of an attraction in sobriety. In recovery, not drinking is just the beginning. After that, you have to change your whole life, and that includes refraining from doing anything you’ll be ashamed of in the morning. Do he and Cindy get to first base by Labor Day? Or home? I’m not telling—and don’t you dare read the last page first!
Posted by Elizabeth Zelvin at 3:00 AM

I agree that Julie Spencer-Fleming sets the bar pretty high with her protagonists, and it takes six (?) books to reach the point we knew/hoped/guessed they'd finally get to. But the obstacles that kept them apart for so long were substantial and convincing.

One problem that we series writers face is that we can never be sure how long our publisher will allow us to spin out the story and its subplots. Do we have to have closure in Book 3? Book 6? (I'm now targeting Book 8 for one series.) If we don't move them along quickly enough, readers get bored and impatient. If we move them too fast, then we throw them into a whole new category (coupledom?) and lose some of the tension. That's not always a bad thing, but it may not be what you enjoy writing.

Sheila, you're right, it is a dilemma, even disregarding the danger of the publisher cutting a series. Apart from Julia Spencer-Fleming's pair, the most agonizing crawl toward coupledom has to be Cynthia Harrod-Eagles's Bill Slider and Joanna. In both cases, once they finally overcome the obstacles and get to the clinch, next comes pregnancy. But does it work? Is it really beyond the end of the story arc. Is it, um, belabored? Hard for lesser writers to pull off.

The important thing about Liz's books is that you read them. The topic of co-dependency and self doubt is beautifully and affectionately handled. A very difficult topic handled with grace. I am truly enjoying watch Bruce grow up and take risks. I think it is good that books give their protagonist a chance to hold the tension and get together after a while. It gives depth to the characters. And to their lives.