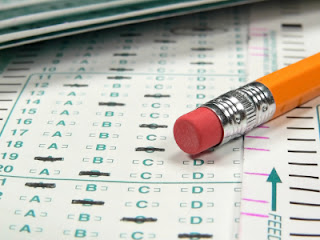 My son recently took the ACT Test.  Remember this?  Back when we took it, there were no prep classes, no special pre-ACT software, no weekly review sessions in advance.  We students of the pre-90s era took the test cold, and lived with the results.  We also had to deal with those dreaded analogies, which looked, in my memory, like this:

There are no longer analogies on the ACT.  I took the test back in 1982, and my score was a not-that-impressive 26 (I scored a 34 in the English section, but my math was abysmal).  But an ACT rep who came to our school recently told us that if you took the ACT prior to 1989, you should now add 2 points to your original score in order to reflect what you would receive on the ACT today.

So, interestingly, my son and I ended up getting the same score, about 30 years apart.

So what level of vocabulary does the ACT test?  Vocabulary.com, a review site for ACT and SAT tests,  offers some pretty challenging words.  Do you know the meaning of

Try taking the vocabulary test.  I did it, and I did not get 100%.  It wasn't because I didn't know the meanings of words, but often because I disagreed about how they would be used in context.  (I also found an error in the test). :)

The ACT remains a significant factor in determining a student's chances for college admission; however, some colleges are starting to look at the ACT scores as less significant than plain old school grades. Therefore, students who don't bother to work hard in their classes because they're confident they'll score well on standardized tests would be in for a rude awakening.

In the meantime, if you ask me, the best preparation for the ACT is reading a lot of books, and starting in grade school.

Well, now... the only word on the list that I didn't know the meaning of was 'orisons'

But now I do. Couldn't let it go undefined. LOL.

I did. "Nymph, in thy orisons be all my sins remembered." (Hamlet)
But I don't remember the ACT. It was the SATs in my day, but I assume it's the same thing. I wonder why they eliminated analogies, which imho are a nice demonstration of the capacity to think.

I also took the SAT, Elizabeth. The college students I currently teach are the first group of kids who had constant testing throughout their school years from No Child Left Behind. The ability to think logically is not something all those tests appear to measure. So I can see why the ACT would drop that. It is a sorry thing, I'm afraid.

Good job, Victoria! It's a fairly daunting test, I think.

Liz, I knew orisons for the same reason! :) I agree with you about analogies, but my sense is that they removed them because they WERE so difficult that they felt it created an un-level playing field. But yes, those analogies were tough!


Susan, I took the SAT, too, but now I can't recall my score. In the early 80s, we were encouraged to take both tests.

And PS, Susan--don't you think that lack of logical reasoning is evident in public discourse?

Julia Buckley noted: "... don't you think that lack of logical reasoning is evident in public discourse?"

It gets worse -- this morning on NPR there was an article saying that speeches in Congress are now at a 10th grade level.
--Mario (of the SAT generation)

Mario, this is indeed disturbing.

But I wonder if it suggests that they need to "dumb down" their text for their listeners/readers, or if they are just linguistically impaired.

I've no doubt you are right, Julia, they are pitching to their audience. Being seen as "too intelligent" is iffy for a politician lately. My great fear is that it's both, however. Dumbing down is a general trend. :(

The test used, btw, is called the Flesch-Kincaid scale. Wikipedia has an article on it. A search on the terms NPR Congress 10th grade brings you the article I mentioned, if you're interested.--Mario

Thanks, Mario. I shall investigate!

And we didn't take the ACT upteen times to catch that elusive perfect score. I took it twice. The second time I lost two points and decided to quit while I was ahead. And don't get me started on the high schools and AP testing...

Exactly. Like so many things, it seems to have gotten out of control, and it defeats the original purpose when students take it five times.