Everyone has moments when they know that they're about to make a decision that will change their life and their future history. It may be momentous, like accepting a marriage proposal, or it may be as trivial as buying one kind of cereal rather than another (and you find a dead rodent in the box and you sue the maker and become rich and buy your own island).

I've had a few. One was the first time I saw Wellesley College on a college tour. I took the tour (something like the eighth college I'd looked at, in the company of my mother and grandmother), and I knew that was It, settled, done. I even said so in my diary.

Another was when I was looking for places to stay when my husband and I were taking our daughter on her college tour, and I clicked on a link for a bed and breakfast in western Massachusetts and found Muddybrook Farm, and said, "wait—I know who built that!" We stayed there, and it formed the heart of what is now the Orchard Mystery series, for which the sixth book comes out this summer. One fortuitous click, and a series was born. 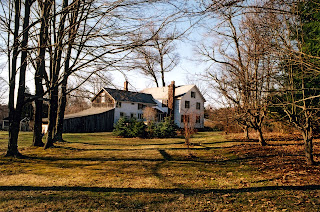 Another occurred when I was applying for jobs not long after that, and my finger hovered over the "Send" button, and I thought, "this could be important." It was, although not in the way I had anticipated: I was fired after six months. But that was what gave me the time and opportunity and even the compulsion to try writing full time. If life hands you lemons—write a book!

And another happened this past weekend, when I attended a full-day seminar given by agent/writer Donald Maass, sponsored by Sisters in Crime New England. (I'd include pictures of the event, but most of us were too busy taking notes to use a camera!)

Normally I avoid "how to write" events and books, not because I'm arrogant enough to think there's nothing I need to learn, but because there are a lot of good ideas out there and there's no way to read them all, much less implement them all. But I've been hearing about Maass from a lot of sources for a long time, so I went.

I won't go into details (take the seminar yourself!), but about six hours into it, with 30+ pages of detailed notes, a cramped hand and a whirling head, I realized what was wrong with my protagonists: they were wimps.

When we (as women) write female characters (targeted at our largely female audience), we want them to be people that our readers can identify with. They should be imperfect, struggling, but ultimately triumphant, and above all, it's drummed into us that THEY MUST BE LIKABLE!

How do you make a central character likable? You give her a few modest flaws, some distinctive talents, a dash of vulnerability, and an innate sense of honesty and justice. And don't forget loyalty. Sound like someone you'd like to hang out with?

Sure, but remember, this isn't literary fiction, this is mystery, and after you've subjected your protagonist to a few murders, up close and personal, maybe even some direct threats by a crazed killer, don't you wonder how the heck she forges on, still cheery and perky and just plain nice?

One challenge to writing a series is to give the characters room to grow. I usually take my protagonist at the beginning and dump her into a difficult, hazardous, stressful situation—with a body—and see what she does. Of course she solves the crime by the end of the story. But wouldn't you like to see her learn a little something from her experience? (Apart from, "try to stay away from dead bodies and killers.") If she is static, she becomes boring and predictable.

To make matters worse, I've made a couple of my protagonists professional women. They're supposed to be smart and maybe even managerial. So why are they taking 288 pages to solve a murder, and wringing their hands and complaining "why me?" all along the way to the Trusty Sidekick and the Potential Love Interest?

Listening to Donald Maass, I realized that this had become a problem for me. My protagonists were being buffeted by outrageous fortune, and they were sitting back and taking it. And I decided I'd had enough. Ladies, your trial period is over; you've earned your stripes in crime solving; now please, please take charge of your life. If you're in a new profession or position—make it your own. If you've been waffling about that hunky guy who's hanging around, take the initiative and tell him how you feel. Or cut him loose. But make some decision!

Will it be the right move? Time (or my readers) will tell. Is this epiphany due to the wise words of one speaker? Not altogether, although it was his lecture that jumpstarted the process. (Of course, another one of my marginal comments during the lecture was "there are mice!" So maybe not all insights are useful or usable.)

What does it take to spur an "aha!" moment for you?

Interesting! Good luck with your next heroine (and fun marginal comments). :)

Sheila, you've made me feel better about the fact that a reviewer of DEATH WILL EXTEND YOUR VACATION said (in the course of a very positive review that called the series "definitely character driven") that she sometimes found my character Barbara "irritating." My first thought was, "Uh oh, I hope it's not the parts of Barbara that resemble me!" But on reflection, I realized that if Barbara becomes irritating to some readers, it's because of the way I've taken her over the top--compulsively helpful to the point of nagging, sticking her nose in everybody's business--long past the point where I'd control myself and maintain some boundaries. But then, I'm not an amateur sleuth. ;) As for growth and change, since my characters are in recovery, they've got to grow and change or die--which is exactly why I chose to write about recovering people. My protagonist Bruce has learned something major in every book, and in this one, Barbara uncovers a serious problem of her own. I think the issue Maass pinpointed for you is particularly challenging for cozies, which my books are not. In addition to growth of the characters, you're talking about giving them some kind of edge.

Many mystery protagonists don't "change and grow" at all. If you book #15, you'll find the character behaving and thinking exactly as she did in book #1. It's not an easy thing to deal with, because readers love characters as they are and don't want them to change.

Sheila, so glad Don's presentation struck a chord with you. After his six day Breakout Novel Intensive, my head was spinning -- and my hands could barely grasp the steering wheel for the long drive home!

Using some of his techniques within the conventions of cozies will be tricky -- but it can be done! Looking forward to seeing how you and I both use them!

I think decision is one of the hardest challenge in our lives. Yes~ there's so much turning point ~ it could be something for the better or sadly, for worse.