Recently I wrote about what my daughter left behind. It should be no surprise that the stuff hasn't moved after a few weeks, and probably will be sitting there for a while, due to the peculiar storage configurations of our house. That made me start thinking about where people have put their stuff in the past and what that tells us about how they lived.

I live in a Victorian house built around 1870 that would probably be considered large by anyone's standards, especially if only two people (and three cats) are living in it (according to the 1910 census there were eight people living in the house, including several boarders). It has four rooms on the second floor that can be used as bedrooms (although one may have been an upstairs sitting room), plus an unheated but plastered room in the attic for the hired help.

Built-in storage on the first floor is more than adequate, even by the standards of the Victorian era. While the kitchen had few cabinets (mainly a sink with flanking counters), there were two full closets for food products and/or china and glassware. But wait! There's more!

There is a full walk-through pantry, running from the kitchen to the dining room, with shelves lining one wall and an additional shelf above head height on the opposite wall. Plus, there is a short (5') but deep closet for more china, etc. And if that's not enough, there is a full-size glass-fronted closet in the dining room, no doubt to display the "good" china. 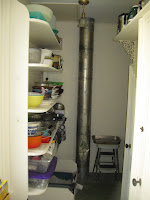 However, there is no coat closet. Instead, there are two rows of antique hooks near the back door. I guess you were supposed to shut the door to the dining room unless you wanted to look at hanging coats.

Upstairs there are four closets, total. The front bedroom has none. The master bedroom has one, plus a built-in set of drawers (underneath a mysterious concealed cistern), flanked by low cabinets that can be accessed by only one door (great place for a small child to hide). The bed/sitting room has one, somewhat larger closet. All these closets are less than a modern hanger's width deep; both are lined with Victorian hooks. 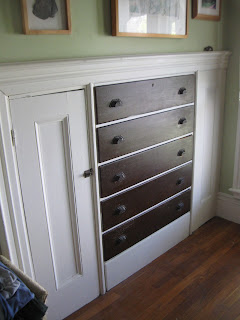 The back bedroom, which I think is a slightly later addition, has two closets, one of which is the linen closet.

In the basement there was what we guess was a walk-in pantry that could be locked, lest anyone make off with the preserves stored on shelves there. It was more or less falling apart when we arrived, and is now gone. And there is a full attic, although there's no heat or insulation up there, and it's possible to stand upright only in the middle. 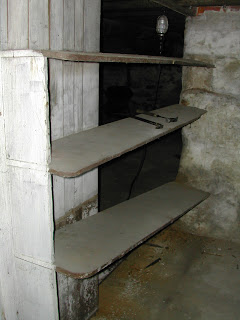 Based on this evidence I infer:

--China was more important than clothing, and was allotted more space. You could wear the same dress all week, but heaven forbid you don't use the "good" china in the dining room.

--and a corollary: good china should be seen, while everyday china could be hidden.

--You shouldn't have too many clothes, and you shouldn't fuss over them—just throw them on a hook and be done with them.


You may have noticed I didn't mention a single bookshelf in the house (until we built our own). Maybe there were free-standing book cases, but we'll never know.

To broaden the observations, I think I can say:

--The builders here put their money where it showed. Moldings in the front of the house downstairs are deep and thickly carved; in the back, not so much.

--Upstairs only one of the bedrooms has a finished (in this case, oak) floor, probably a later addition; the other rooms have rough painted boards. No one (of importance) was expected to visit the upstairs rooms, so why waste the money?

Obviously the Victorians (at least in this small Massachusetts town) were a mass of contradictions, but the main message I get is: put your money where it shows, and skimp on the rest. (By the way, the person who first owned this house was a grocery clerk, which may explain the boarders in the early years.)

One last observation: whoever designed this place was obsessed with doors. The kitchen has five (plus three windows). The back parlor has a mere three, but one is a sliding double door. The dining room has five, if you include the china closet, plus three windows. Sometimes there are doors next to doors, going different places. And there are plenty of very large windows, which speaks of a time when either fuel was plentiful or people were used to being cold. Maybe all those doors were supposed to help regulate the flow of precious warm air?

I call this domestic archeology.  Have you made any interesting finds in your house?
Posted by Sheila Connolly at 12:14 AM

The New England house I grow up in was built in the 1870s and had a lot of doors. One room had seven. It turns out that the person hired to build the house was paid extra for doors an so he put one any place he logically could. I suspect that practice may have been common.

(Later a separate garage/workshop was built and a mason hired to build a chimney. The ladies of the house left for an appointment one morning as the chimney work was begun. They returned in the afternoon to find the mason passed out on the roof of the garage, an empty bottle in his hands, with a completed chimney that actually hooked at about a twenty degree angle. That crooked chimney became sort of a landmark and stood for over sixty years.)

Closets (certainly in the U.S.) were more of a 20th-century phenomenon, starting say around WW II. Wardrobes for clothes that needed hanging, chests of drawers for folded clothing, and trunks for storage.--Mario

Wow, your kitchen is more fabulous than before. Where did you got those antique hooks? I think I'll love it in my own room.