"Stuff" and the Reality of Hoarding 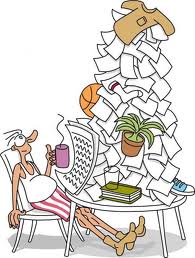 Today my husband and sons went out to tackle a job I've long been requesting: to clean out our garage.  We have never parked a car in our garage because we have a very handy driveway right next to our side door.  It is far easier (and safer) to park next to the door than to get in and out of the car to open the garage door, then exit the car in a dark garage where predators can (and have, in my neighborhood) accost a person who emerges.

But the more pressing reason that we don't park in the garage is that the garage has a lot of stuff in it, as does our basement.  We have no real memory of putting this stuff in there, and when we encounter it we feel like archeologists who are dealing with the possessions of another civilization.

We do not fit the definition of hoarding; the upstairs of my house is fairly clean and neat, and I give away bags of clothing and household items every month in an attempt to pare down any growing clutter.  However, I've seen hoarding, both in family members and in colleagues at work (ever seen a hoarder with his or her own classroom)? and it's sad to see people, perhaps like all of us, who are very attached to their stuff, but that they do not seem able to filter their level of personal attachment to an object because somehow EVERY object becomes something of value, something that cannot be let go.

Recent television shows about hoarding have put a spotlight on this psychological phenomenon, but not in a truly constructive way. In a post on EveryDay Health, psychologist Debbie Stanley refers to this as "exploitainment" because "the shows reinforce the perception of people who hoard as societal outsiders, which interferes with the viewer's potential for empathy and leads to further marginalizing and hiding of hoarding behavior. The shows also do a disservice in their portrayal of treatment. It is ineffective to "clean out" a hoarded home in a weekend, through pressure or coercion, or at a pace faster than the client can tolerate. Stripping away a person's coping mechanism before a better one has been gradually established is cruel and unethical, and usually results in more severe hoarding."

Hoarding itself as an obsessive behavior, and can have any number of anxieties at its root, including fear of letting go or the terror of losing control, as well as a need for control or perfection (i.e. "Once I throw this away it will be in someone else's hands, and I will no longer have control over the situation).

In the case of my hoarding relative, she recognized her desire for things, but never acknowledged that it was out of control.  She attributed it to her childhood of poverty (she was born during the Depression) and the fact that, as she remembered it, she had very little as a girl and always felt want.  As an adult who eventually had access to money, she began manipulating her finances--using credit cards, cashing   her children's savings bonds, getting into debt--so that she could buy things.  Every day packages came to the house, usually with clothing or jewelry, and generally when she bought things she wanted to buy two or more so that she would not "run out" and then one day need that particular item.  Rooms of her house were off limits because of the large piles of clothing within, and her back porch was not opened for years because boxes were stacked all the way to the door.  This meant that no one had access to anything IN the boxes, nor could they get into the attic, but she was content to leave it out there, untouched, limiting the way that she lived.

Perhaps because of my rational response to her irrational behaviors, I have never wanted to let much accumulate in my house, and my psychological reward comes from the relief I feel from paring down, giving away.  Yet even with this mindset, I see things accumulating.  Our house is very small, and so when we transition from one phase to another (babyhood to childhood, childhood to teen years) everything from the previous era migrates downward.  We have almost no closets, which makes storage even more difficult.  Yet I want to maintain order in my home, among my possessions, because they reflect my attitude toward the world.

But we might all, as indulgent Americans, have hoarding tendencies. Remember George Carlin's routine about "Stuff?"  (Here's a youtube clip).  I am a rather control-oriented person, and so when the definition of hoarding includes reasons like  "Because of the fear of forgetting and the inability to accept that we can't be in total control, items will be kept so that with written/printed material for instance, it can be re- read at all times."

Then I think, “Uh-oh.”  I keep all sorts of documents (and not always in the most organized way) because I wonder if (or fear that?) they will be needed again—that I’ll need to provide some sort of evidence in the way of a number, a figure, a paragraph.

Usually I never seek these things again—but do any of you have piles of cancelled checks from days gone by?  Old tax envelopes from before you did things online?  Stacks and stacks of old photographs that never made it into albums?

Still, today we are working toward eliminating accumulated STUFF.  Sure, I’ll be contributing to the growing garbage landfills, but I’ll have to worry about that one tomorrow.  J

My most successful strategy against hoarding was to sell, move, and buy several houses. It's amazing how much you get rid of when you have to move it! Now I have a small, one-floor house with several large closets and no basement and I don't miss all that "stuff." It is probably not a plan for everyone, however!

I do think that would be most effective--but so much work, Susan! Still, now you are reaping the benefits of paring down.

Its the first time I heard about this word 'HOARDING'. Well I think this behavior seems to be selfish in such a way but I think it also have positive part like planning before any scarcity may arises. Very knowledgeable post!