The Ghostly, Mysterious and Lyrical HAMLET 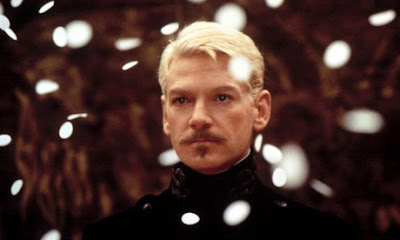 I first read Shakespeare's HAMLET as a senior in high school, back around 1982. I remember liking it.

When I became an English teacher, I assumed I'd be teaching it all the time. But somehow, in twenty-three years of teaching, I never once taught HAMLET until this year. My class just finished the play, and I have to say that I understand why it's sometimes called the greatest work ever written.

It's not just that HAMLET has many layers for interpretation--mystery, ghost story, psychological tale, philosophical treatise, love story, dysfunctional family yarn, Oedipal triangle, life and death conflict, revenge drama--one could go on with this list for quite some time. After all, the play has kept the public's interest for more than 400 years.

But what stays with me now, after my first adult examination of HAMLET, is how beautiful the words are, and how they tend to stay imprinted on the mind.

I thought my students might feel this way, too, but they're eighteen, and it's not the same at that age. I remember that my own high school teacher gave us a sheet of lines to remember so that when he called on us in class, we could recite something by heart. But he didn't want any of us to repeat a quote that someone else had already said, so it was a terrifying experience, hoping I memorized enough things to be sure I said an original line. The one I finally said out loud was "A little more than kin, and less than kind," which is Hamlet's first line in the play, and his description of his uncle-now-father, Claudius.

My teacher, Mr. Wooddell, wasn't thrilled with my choice, since it was the shortest one on the list. I fell into disfavor that day.

Yet this year I tried to encourage my students to do something similar, except instead of demanding that they memorize something (I'm not as tough as Mr. Wooddell), I offered two extra credit points to the student who could repeat one rhyming couplet from the play. "They're easy to remember," I assured them, "because they RHYME."

So the first student to try was asked if she could repeat what Hamlet said about time after seeing his father's ghost.

"He actually said 'Time is out of joint; o cursed spite/that ever I was born to set it right," I told her.

Her friends rallied around. "You're not going to give her the points?"

"No. She didn't come anywhere close. And it was only two lines," I said.

"But she had the idea," said one stubborn young woman (demonstrating that special quality that theorists say is prevalent among "millenials," or the students of this generation who are said to be the product of doting parents and an excess of rewards).

"You're not appreciating Shakespeare's own words, which was the goal of this challenge," I said.

They looked at me disapprovingly. Some suggested that it would be nigh on impossible to memorize those words, and for some students it's true, because their vocabularies have shrunk with the lack of reading, and literally every word of the play is unknown to them (barring articles and prepositions).

But the words are SO beautiful that it remains worth the effort. I nearly cried each time I read Hamlet's soliloquies, not only when he longed for death and feared what might come after it, but also when he explained the existential malaise that had become his worldview:

"How weary, stale, flat and unprofitable seem to me all the uses of this world!"

Yet Hamlet lives on and suffers, because Hamlet is a THINKER. He is a university student, a reader and a life-long learner, and thanks to his training as such, he cannot commit a brutal act of revenge simply because his father tells him to. He must think about it, and examine it and think some more, and this vacillation is identified as his tragic flaw. He must decide whether "it is nobler in the mind to suffer the slings and arrows of outrageous fortune."

But that's just it--Hamlet has a noble mind, a worthy one, which is truly what elevates this play to the level of great thought. Hamlet goes from his "To be or not to be" soliloquy, a fearful examination of his options, to a "Let be" speech delivered to his friend Horatio, in which he acknowledges that he is ready for whatever may happen, even his own death. "There is special Providence in the fall of a sparrow," he tells his sad friend. "The readiness is all."

Here the beauty of Hamlet's words reflect the pared-down philosophy of his thinking. He has faced the slings and arrows and has come much closer to facing eternity itself.

Hamlet goes on to fight a duel which everyone loses; as with all Shakespearean tragedy, circumstance litters the stage with bodies, and Hamlet lies dying in the arms of his true friend, Horatio, who wanted to die with him. Hamlet insists that Horatio stay alive, but asks him to "Absent thee from felicity awhile/and in this harsh world, draw thy breath in pain/to tell my story."

This final concession to death even as he begs his friend to stay alive for him is, for me, one of the most beautiful parts of the play, but the most lovely, the most golden sentence in the play is Hamlet's last line: "All the rest is silence."

How long, I wonder, did Shakespeare ponder what last wisdom Hamlet should impart, and how many things did he consider that might best capture the mystery of the universe in contrast with man's potentially meaningless existence on earth?

The play begins with the words of a guard: "Who's there?"

The end of HAMLET echoes the same sentiment, as a man searches for his identity on earth and eventually must take his question to Heaven.

(Photo: Kenneth Branagh in his grand 1996 film version of HAMLET).
Posted by Julia Buckley at 12:00 AM

Julia, your students are lucky to have you, and you can tell them so from me! I studied Hamlet in high school, and I was in love with both my English teacher and Laurence Olivier as Hamlet--and on the latter count, at least, I wasn't the only one. The play that I think of as the most beautiful in terms of language is Romeo and Juliet, in which I played Juliet's mother as a college freshman, hearing the words over and over in rehearsals. The kids might relate more to it, too--especially if you tell them that Juliet was only 13 or 14. Her mother tells her, "I was your mother much upon these years that you are now a maid," which I interpreted to mean that Lady Capulet was no more than 28 and shouldn't have to be made up with lines on her face. :)

I often wonder if students should be given the chance to see Shakespeare performed before trying to read the plays. I mean, performed by live actors, doing it well--not as a movie or an edited television version sprinkled with commercials.

When all circumstances come together (a skilled and talented ensemble, a receptive audience), you can get drawn into the play and the language begins to sound quite natural. And Shakespeare did intend these to be seen, not read.

On a slightly different note, I found that often my high school students could shine when they heard Shakespeare spoken by taped actors. In fact, one of my--shall we say--less academic students attained the admiration of his peers because he had "street smarts" and could figure out the motives of Shakespeare's characters long before his fellow classmates. I agree that Julia's students are fortunate indeed to be taught by a person who loves the Bard's language and his play.

I appreciated Shakespeare's work once I saw a live production.

Oh, my students listened to the entire play on tape (BBC Radio, starring K. Branagh and Judy Dench), as WELL as watching several scenes with several different actors--Branagh, Gibson, Tennant. AND they watched part of a cartoon version made by Shakespearean Tales--a nicely abridged telling of the ghost scene.

Believe me, we've looked at it inside and out, and I'm sure some of the students will take away something valuable. But I do feel that they grow more and more distant from his language, which distresses me a bit.

Liz, how fun to have performed Shakespeare on stage!! That's something I've never done.

Sheila and Susan, it's true that it's best to see (or at least hear) the play done by professionals.

Oops--Dru, I just saw your post. Yes, live is best.

Alas that the language makes this unsuitable for your purpose, but there's a Canadian television series called Slings & Arrows, a comedy about an ensemble of actors at the (fictional) New Burbage Theatre. Four episodes per season -- first season, they're doing Hamlet; second, Macbeth; third, King Lear.

Lots of backstage and offstage stuff going on, of course, but it was conceived and written by actors (two of whom also star in the series), so they do get the whole feel of a repertory company exactly right, and we do get a good view of the sort of things that go into mounting a production -- including trying to figure out how best to play the characters.

Unfortunately, if you're teaching USAmerican high school kids, their parents and your school would have conniption fits about the language and the sexual situations, but it would definitely be a different approach to presenting the play. Meanwhile, though, you might enjoy it yourself. I think it's very funny, but I'm also getting some different insights into the plays while I watch.

Thanks, Mario--this sounds fun. I know that our former Brit Lit teacher did an amazing job teaching Hamlet, and one of the many media she shared was a modern interpretation of HAMLET that was filled with the F-word. Which, if you think about it, Hamlet would use plentifully in today's world.

She told me she played it for her class and they really seemed to relate to it, but of course I was terrified that she would be fired. But since no student ever complained, I don't think the powers that be ever knew it. :)

I will look up this series, at least for me. :)

I enjoyed reading this post more than any other I can recall--it's a wonderful experience to share a great work of literature with someone who feels it from the inside. Thanks for posting.

Thank you, Susan!! I loved writing it, because Hamlet is haunting me like the ghost of Shakespeare himself, and guess how much my family wants to hear me quoting The Bard?

"How weary, stale, flat and unprofitable seem to me all the uses of this world!" I always think of Lord Peter Wimsey in Murder Must Advertise for this line. :)

But I am a Shakespeare groupie from way back.

If we ever meet, Jeri, we can recite our favorite lines together (or we can take turns). :)