When I was ten or eleven, my father bought a set of the Great Books of the Western World from a travelling salesman.

My father was not one to fall prey to a glib tongue, but I was too young to question why he thought our household was incomplete without this 54-book set with matching bindings. He'd grown up in a not-affluent Irish family in Syracuse, and though he obtained both a college and a master's degree, maybe he felt his broader education was incomplete. 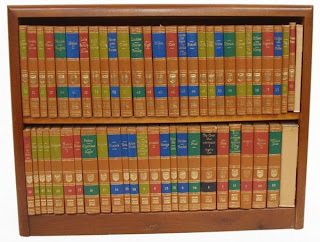 The set came with its own bookshelf; the bookshelf occupied a space in the hallway for the next few years. I was shorter then than I am now, so I could sit in front of the shelf and read the gold-stamped titles on the spines. I don't recall ever opening one of the books, much less reading it. When my parents' marriage fell apart, I don't know what happened to the books. Maybe my father got custody of them, while my mother kept custody of my sister and me. But I still have the bookcase.

I was reminded of this when Encyclopedia Britannica announced this month that it would cease print publication, although the digital version would go on. The EB: the oldest English-language encyclopedia still in print, now no more. Get your copy now, for there are only a few thousand print sets left. [Note: in doing a bit of research on this, I learned that the Great Books sold poorly in their first decade, until Encyclopedia Britannica took over the marketing strategy and had their experienced door-to-door salesmen handles them. In 1961, they sold 50,000 sets. That was the year my father bought ours.] 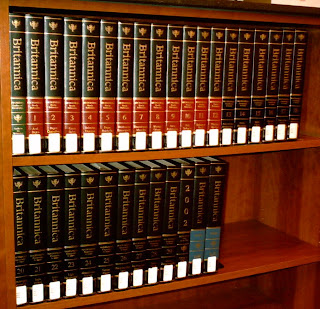 Yes, we had a set when I was in grade school. I couldn't tell you which edition it was, but I'm pretty sure it was purchased new for my sister and me to use in school—that must have represented a substantial investment. And we did, or at least I did use them (my sister was a reluctant scholar). In fact, every now and then I'd pull out a volume (they were heavy!) and read something purely for entertainment.

I also remember a handy four-volume set of books whose name is lost to my memory (until I checked Google and found that it was the Illustrated Library of Natural Sciences, four volumes, 1958). The boxed set sat on top of our television in the family room, and I learned multi-tasking early, watching after-school shows while leafing randomly through scientific explanations. I'm sure that was my mother's intention, when she chose where to put the books.

Now I wonder if those books provided me with a sense of order, implying that all important knowledge about anything could be encompassed in a finite set of books. Somebody else had made the decision about what was important, and there sat the results, within easy reach. All I had to do was learn everything in those books and I'd be set for life.

It was a nice fantasy while it lasted. In college I discovered that I was supposed to go beyond memorizing the facts I found on a page and instead question them. That was unsettling. Later in graduate school I realized that I was training to be someone who chose those facts. I was supposed to become one of those Experts on Everything. Really?

I almost feel sorry for young students today, because the available information knows no bounds, thanks to the Internet. At the same time, the ability to assess any piece of information has become increasingly important, at an early age. Sure, research is simple: just Google your topic and you'll find more details that you could possibly need. But scroll past the first page and you realize that the same information is repeated over and over—and how do you know if it's correct? A "bad" fact travels as far and as fast as a "good" one.

But one thing is missing: browsing on the Internet is not the same as picking a book at random and leafing through it—and learning something unexpected along the way. The same is true of buying books, now that bricks-and-mortar bookstores are assailed from all sides by online sites. Sure, you can find the book you want in seconds, but what happens to that lovely serendipity of browsing in a section of shelves and stumbling upon something that intrigues you? Something you would never think to look for?
Posted by Sheila Connolly at 12:15 AM

We had the Encyclopedia Americana as a kid, because one of my uncles worked for the company. But as an adult, we had a well-used set of the 1962 edition of the Britannica until my husband insisted we free up the shelf space. I figured he had the right, since he's the one who'd read through the whole set several times, mostly in the loo.

BTW, can you imagine buying anything nowadays, no less what must have been around 50 pounds of books, from a stranger who came to the door?

BTW, I know those modifiers are wrong. Visualize correct grammar. :)

We, too, had the Encyclopedia Americana and I also sat on the floor and pulled out books at random to read. The fact that there was this one source of so much varied knowledge always amazed me.

Browsing bookstores isn't what it used to be, Sheila. I've tried twice recently to spend a leisurely hour or so in the nearest Barnes and Noble, but found the experience totally unsatisfactory. There are too many games and toys and gewgaws in the aisles. It seems like they never have the book I want to look at and ofttimes I can't even find the section I'm looking for. (It's the rearrangement to accommodate said gewgaws that's confusing me.)

So I've learned to "browse" the Internet instead. I just ordered a book online from a link to an author's website from another blog I read. Never heard of him, but the book sounded interesting. And that's the new way of things.

We had a set of encyclopedias as kids, too, but I can't remember now what kind they were, but maybe they were the Encyclopedia Americana or Britannica since my parents bought them from a salesman who came to the door, too. Finances were tight in those days with only one income and five kids at the time. It shows how much my parents valued learning.

In college I discovered the Oxford Dictionaries,many volumes of them for not only a definition of words, but the history of those words going back centuries. It was my dream to someday have all (I think 16) of them someday.

Like you said, Sheila, the joy of browsing through the shelves of books or the pages of an encyclopedia and discovering something you weren't even looking for is something special. Now the only place one can do that is in used book stores.

I feel very nostalgic reading this, because it was only last year that I finally gave our old set of World Books to Goodwill (and I've heard that lots of charities don't even want them anymore).

To the day they left our house, they had that wonderful "new book" smell, and the pages were still crisp and clean. But none of the information had been updated since the 70s.

But I really enjoyed looking at those books as a kid, and even in high school I regularly used them for research.

Remember Kim Peak, the guy that Dustin Hoffman's "Rain Man" is based on? I watched a documentary about him in which his father said that they knew he was a special child when, at the age of three or four, he would read an encyclopedia (his left eye read the left page, his right eye the right) and then would push it aside when he had read--and memorized--the entire volume. Then he would move on to the next letter. :)

We had the set of World Book Encyclopedia. And I used them a LOT when I was a kid. Especially when I wrote my stories as a kid, writing "just for fun" in those days. I miss that experience of going from subject to subject and reading about a variety of different things, but it is very similar with the hyperlinks in Wikipedia.

My father fell prey to a contest that had you buying one book of an encyclopedia to look up the answers to the quiz. No prize. Husband fell prey to Encyclopedia Britanica, but no idea where they went, but kept the 3-book copies of the very first version. They sit handsomely on my shelf, but never read.

Gosh, I LOVED those books! My Grandpa had gotten the "Funk & Wagnel" (spelling) books & then my dad picked up an old, used set of encyclopedias that were going to be tossed from his school. I spent hours and hours and HOURS digging through those books. Of course, I used to read the dictionary for fun. Weird kid, I suppose.

awesome photography blog thanks for sharing the photos.

awesome photography blog thanks for sharing the photos.

Thanks for finally writing about > "Farewell Britannica" < Loved it!