I'm in the throes of completing the first (unnamed) book in my new (unnamed) Irish series, coming in just over a year. I've been to Ireland more than once—four times, in fact. The last trip, with my husband, was supposed to be a research trip, but the research was somewhat sidetracked by a broken ankle (it won't surprise you that I managed to include a visit to the emergency room in the new book, but it's justified because that's where the autopsies for County Cork are performed). 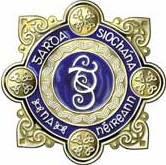 But no tourist can investigate crime in a foreign country (although I did once visit a local station of the Garda Siochána (the Irish police, called "guards" rather than police, in Avoca, which is where the PBS series Ballykissangel was filmed, if anyone remembers that). For an understanding about how crime is regarded, and how the police/gardaí and courts actually operate, I have to rely on public reports.

In the past year or so I have become a news junkie, checking CNN headlines frequently through the day. News is condensed to current shorts bits, and I have the option of learning more or passing by. I shouldn't have been surprised to find that RTE (Raidió Teilifís Éireann, the public service broadcaster for Ireland) offers a similar website, which provides news (both international and local), business reports, sports info and more for Ireland. Now I'm hooked on that too. It's interesting to see which headlines they pick up and how their coverage compares to that of CNN. 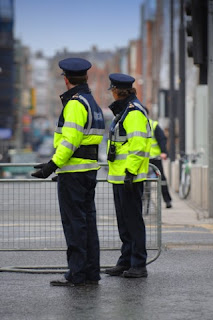 Since I'm writing a book that includes more than one murder, naturally I gravitate toward reports of murders in Ireland, and how they are investigated and prosecuted; I'm trying to understand the terminology so I can get it right. (Which is probably absurd, since as far as I can tell, no one in Ireland reads cozies, so no one is likely to write to me and complain that I got the chain of command or who investigates which aspect of a crime wrong.)

So I think it's safe to say that there's a difference in attitude toward homicide, and I think it's reflected in the language used in news releases. There is a kind of innocence about the individual reports, a courtesy of language. It's sometimes possible to follow a case over time, although a surprising number of cases reported took place well in the past. Just this month, a man already serving a sentence for the attempted murder of a friend was given a life sentence when the friend died, two years after the attack. The report on that one closes with "this case has made legal history and this is the first conviction of its kind."

A number of "political" murders continue to occur, or at least reach the final stages of prosecution. A member of one or another dissident group (yes, the IRA lives on, in various splinter groups) may be told to bring a target to a site for a "punishment shooting." One such suspect who confessed,"named the others involved and his life is now in danger."

The gardaí are persistent about following up on unsolved cased, and there are often reports of an arrest being made years after the crime. Often someone who had disappeared years earlier is found. In both old and new cases, a pathologist "attends the scene" and a post mortem is conducted. The scene is "technically examined" or "forensically examined" (presumably by their equivalent of Crime Scene Investigators). The gardaí often "appeal for information" from the public.

Charges of murder are not brought lightly in Ireland: in the case of one murder (which I'm saving for a book!), over a thousand people in the (rural) area of the murder were interviewed, and it took five years to declare the death suspicious—and they still haven't made an arrest.

I'm not saying that Ireland is crime-free. There are gangs, there are drug dealers, and criminals are not all confined to the big cities. I don't want to paint a picture of a bucolic place where everyone loves everyone else, because that would be false. But I want to believe that in a small country, where most people could play the "six degrees of separation" with almost anyone else, murder is a crime taken more seriously than we do here. So if I have murders in my book, I'd better have a good reason—and make sure they're solved. 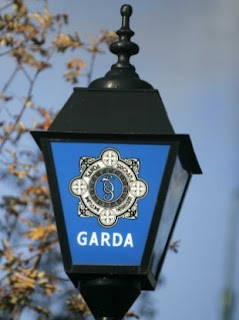 Absolutely fascinating. Thank you for the education. You've reawakened that curiosity about other places, other people.

I'm looking forward to your book. I'd like to see how you handle murder in Ireland which may be small, but I don't think it is simple. Its heritage is long and troubled, and Ireland is so beautiful that there is an amazing amount of poignancy attached to reading about it.

Interesting, Sheila! I look forward to reading the books.

I saw the movie The Guard last night, after hearing raves about Brendan Gleeson's performance on DorothyL--he got a well deserved Golden Globe nomination. It's quite another view of Ireland and the Garda, and as poignant as it is funny. Part of the fun is the love-hate relationship between the Irish and the Americans, with Don Cheadle playing an FBI agent hunting some of those drug dealers.

I love Erin Hart's and Tana French's mysteries set in Ireland. The striking thing to me is how little difference I notice between the Irish police as they portray them and American police. The procedures seem very much the same.