This week I was invited to give a talk to a library group in the middle of the state. It's in an area I love, and it came with dinner. Since it's not much more than an hour away, I said yes.

This was not a group of writers, but a group of mystery readers from a local library. They were uniformly enthusiastic (the event was sold out, with a waiting list). There was no fixed topic, so I spoke about how I became a writer--and about publishing.

Over the past year I've come to realize that I stand with one foot in the old and one in the new. I'm a dinosaur, a member of the last wave to come up through the ranks in a traditional way. I labored in obscurity for years, kept writing, kept submitting to agents (by snail mail!), until I finally connected with a good agency (that had already rejected me more than once) that made that first sale for me and has been doing right by me ever since.

But someone who is hit with that "I want to write!" lightning bolt now will have a very different experience.

And then I realize this was not the first time I have straddling the line. 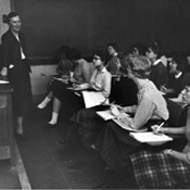 I attended a Wellesley College, then and now a respected women's college. When I entered in 1968, nothing much had changed since the 1950s. We had to wear skirts when we went into the Village a few blocks away, and to dinner in the dorm. We had to sign out if we expected to return late, and we needed our parents' permission if we were going to be away overnight. When someone came to our dorm to see us, they had to be announced by the front desk, and there was a code: a visitor was female, and a male was a caller. Men were not allowed above the first floor, except between two and four on Sunday afternoons, and when you had a gentleman caller, you were expected to leave your door open and keep three feet on the floor. Weekly tea was served, with the housemother pouring, and house-baked goodies. It sounds practically Victorian, doesn't it? 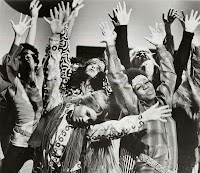 By the time I graduated in 1972, there were no rules. I lived in two co-ed dorms (the women far outnumbered the men, though). We'd been through the student strikes, and the college had ultimately thrown up its hands and said we could take a pass/fail grade in courses because everything was so chaotic. Nobody signed out, and boyfriends stayed over regularly. Those four years spanned the end of an era and the beginning of a new one.

And that's where we are in publishing. The rules are shattered, like a glass fish tank, and agents and editors are flapping around in the puddles trying to figure out what to do next. The big publishers are working hard to pretend that the old model still works. The agents are more flexible and are opening up their own small publishing divisions to produce ebooks. And a lot of writers are saying to themselves, "Why do I need either an agent or a Big Six publisher? I can just clean up my manuscript and reformat it to make it available online, all by myself." And they do, in increasing numbers. Bookstores are scrabbling to redefine themselves—at least, those that manage to stay open at all.

So here I am again, with one foot in each camp. I came up the traditional way, but my agent has her own small publishing company. And I reserve the right to pull out those early rejected novels, blow the dust off, and publish them myself if I choose (with a healthy dose of editing!). It's scary, but it's a really interesting to be a writer. And like most of the writers and publishers I know, I'm not sure where things will end up.

But as long as people want to read, whether on paper or on a digital screen, I'll keep writing.

Posted by Sheila Connolly at 12:05 AM

Sheila, I was graduating about the time you entered Wellesley, and our rules were pretty much the same, except callers weren't allowed past the lobby under any circumstances, and all women students, of any age, had to live on campus, unless they written permission from their parents or were married. The most bizarre were the unmarried women in their forties and fifties, who had to live in the dorm because their parents were dead and couldn't give permission.

Change happens, that's for sure.

As a 1968 graduate of a college in the Midwest, I saw those changes too. And now as a beginning writer, I find the whole revolution a bit confusing. Years ago I read and was told that change would happen way too quickly by the end of the 20th century and that prophecy was certainly correct.

I went to an all girls' school in Lynchburg, VA and once was almost expelled for wearing blue jeans on the front campus lawn!! My, how times have changed... T. Straw