The Golden Age of Musicals

It's been a while since my daughter was young enough to require entertainment during school breaks, but this time of year always reminds me of the Good Old Days when my sister and I were young.

One of the treats of those golden years (well, I am talking about the 1950s, when apparently—or so say today's pundits—everything was better, except for all the smoking) was going to the theater. Since my grandmother lived in New York, that meant Broadway.

I cut my teeth on Broadway musicals. My parents both loved them, and saw them regularly. They religiously brought home the original cast albums, which we played frequently, despite the fact that my father wouldn't let my sister and me go near the "record player." But once a careful adult put a record on, my sister and I would do something resembling a polka up and down the hallway. As a result, the lyrics of many of the musicals of the '50s are forever imprinted on my brain.

Since I was older than my sister, I had the chance to see several of the classics with my mother, or my mother and grandmother. Always matinees, of course, and child-appropriate. My mother set me off on the right foot with Peter Pan—yes, the original version with Mary Martin, which to my surprise had a very short run, which seems unusual for what became an enduring staple. It was first produced in 1954, and I must have seen it that year, because I remember being much shorter than the bar in the lobby, where my mother bought me a soda at intermission. I gather that it was televised as early as the year after that, and all my friends and I knew the lyrics. Want me to sing "I Won't Grow Up" for you? 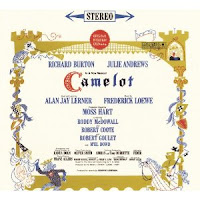 I saw My Fair Lady early on, not first run but in its second 1958 run. I saw Camelot when it was new (Julie Andrews in both, and Robert Goulet when he was hot), and even now the music reduces me to tears. (On a literary note, I read the source book, T. H. White's The Once and Future King, when I was eleven, when it made little sense to me, but I loved the first part, with young Wat and all the animals.) It should be no surprise that I still have those well-played vinyl albums. 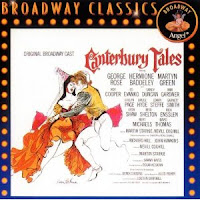 I think even I felt the change in the nature of Broadway shows in the 1960s. We saw a couple of shows that sank like a stone in collective memory. Our family efforts were waning when we saw Mr. President (1962-63), a somewhat odd vehicle for stars Nanette Fabray and Robert Ryan, about which I remember next to nothing except the First Lady's overacting. I think our last effort took in Canterbury Tales, probably in 1964 (I could find all the playbills, but they're in the attic and it's cold up there), from which I recall only one song: "I Have a Noble Cock."

I'm grateful that I had the chance to see all of these. I can't say I've been a consistent theater-goer ever since, and as an adult my selections have run more to non-musical productions. But attending a live performance is not like watching a movie, either in a theater or on a smaller screen. Live, there is always the chance of a poor performance, if one of the stars is having a bad day; but if a production comes together just right, it's magic, especially when you're sharing it with a full audience. Maybe it's like Tinkerbell: you have to believe to make it happen.

IMHO, Andrew Lloyd Webber took all the tunefulness and memorability out of musicals. I too had all the original cast albums of 50s musicals and could still sing along (though I remember Tom Lehrer lyrics even better). The night I saw My Fair Lady, Julie Andrews (still a previously unknown phenomenon) was out sick, so we saw an understudy. You didn't mention movies--that's where I learned all the songs in Oklahoma! and Carousel, shows that came out a little before my time.

The movie of West Side Story is one of my favorite films of all time. The songs really do drive the story.

Stage musicals are my favorite hobby. This is a hokey one, but I did so love Starlight Express. Rent for its grittiness. The Mystery of Edwin Drood for the novelty. Fine, for Betty Buckley and Cleo Laine. I love, love, love the revival of South Pacific. As far as the classics, Carousel with Christine Johnson (Smith) as Nettie Fowler, is at the top of my list. And, of course, The Fantasticks. And, so many more!

I didn't have the opportunity to see shows on Broadway as a kid so my musicals were on the silver screen, but I still memorized all the cast recordings. Now I'm a total theater buff and I'm instilling in my grandkids an appreciation for the live "magic" over movie special effects.

I would disagree about Andrew Lloyd Webber, who at least with Jesus Christ, Super Star, Cats, and Evita brought us many memorable songs, some of them even great. He might have deteriorated since, I'm not really that familiar with his later work, but I wore out my LPs of those first three.

What, exactly, went wrong with musicals, I don't know, but what I do know is that I can listen to the cast albums of the older ones, even if I've never seen them on stage or in film, and enjoy them thoroughly. (The original cast album of the short-lived Goldilocks, book by Jean and Walter Kerr, music by Leroy Anderson, comes to mind.) Modern musicals, not so much. A friend gave me the CDs of Aida and Wicked ... Meh. [shrug] The music strikes me as shrill and shallow.--Mario

My parents did see Flower Drum Song, Carousel and Oklahoma, so those are some of the records I polka'd to.

I liked Phantom of the Opera (seen much later, as a company perk one year), but I'll concede there are only about three songs in there, much repeated. The others I can't even remember.

Jesus Christ Superstar in Boston; the late revival of Camelot, with a much older Burton and Christine Ebersolt as Guinevere, when we lived in California. I think everybody I knew saw The Fantasticks, but I never did.

In a way I'm happy that Glee has been a success--don't you miss the days when people spontaneously burst into song to express themselves?

I LOVE musicals, but I rarely saw them live. But I got lots of soundtracks and I know all the words. :)

The "songs" in Cats are T.S. Eliot's cat poems (Old Possum's Book of Practical Cats, which I consider one of English-language literature's incomparable gems, but you won't be surprised to hear that)set to music.

Oh my God! I never heard of the Canterbury Tales one. I'll have to search YouTube. Who couldn't resist that, er, line?