The Chanukah Bush and Other Soothing Lies

Elizabeth Zelvin
For most people, the winter holidays bring a certain nostalgia—or post-traumatic memories, depending on what kind of childhood you had. I’m lucky to have had wonderful parents, but some of their quirks and crotchets, which appeared perfectly normal to me as a kid, appear in a different light from my adult perspective.
My family was Jewish, so you might imagine we always celebrated Chanukah. Wrong. My mother later denied this, but the way I remember it (the annual event and the later explanation), my parents realized that Christmas was a lot more fun than Chanukah: stockings stuffed with presents, a glittering tree with ornaments, a pile of presents, and, of course, Santa Claus. 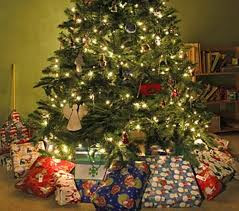 In fact, I know I was a believer, because one of my earliest memories—at four? five? six?—is not of my father blowing the gaff, but of the moment just afterward: my mother saying, “Oh, Joe, don’t spoil her Santa Claus!” Anyway, we always had a Christmas tree, and I don’t think we started calling it a Chanukah bush until we were old enough to appreciate facetiousness.
In fact, the Chanukah bush was and probably still is a fairly common tradition among secular New York Jews with kids. 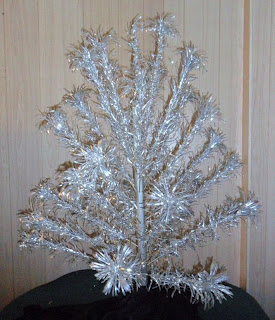 Our tree was a classic 1950s tabletop aluminum tree, which we decorated with the kind of ornaments you’ll now find in fleamarkets and yard sales and also making a comeback as modern reproductions. 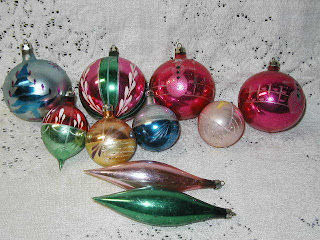 The trees themselves have become collectibles, which you can find on eBay and elsewhere if you google “vintage aluminum trees.” Here are a few, none exactly the squat, bushy model, excellent for hanging ornaments, that lives on in my memory.
I believe I was eight or so when my parents decided it was important to pass on their Jewish heritage by having a menorah and lighting the Chanukah candles. The best part for kids, besides the fun of candles themselves, was the fact that it lasted eight nights, on each of which we got a present. Chanukah was a minor holiday in Judaism until the modern American frenzy of Christmas buying and decorating spurred Jewish families to turn it into something that could at least attempt to compete. 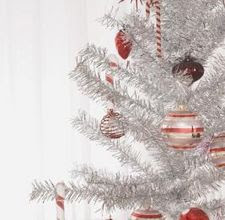 We had stockings, big woolen ones otherwise used for ice skating, until I went off to college at the age of 16, as well as presents on December 25 in addition to Chanukah.
By the time I married my Irish Catholic husband thirty years ago, my mother was denying that any of this had ever occurred. In her conveniently faulty memory, we had always celebrated Chanukah. My husband’s position was clearly stated from the start: “I don’t care what your mother thinks—we’re having a Christmas tree.” 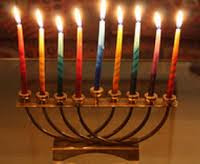 And so we do, along with lighting the candles, eating pot roast and latkes, singing carols (music is another area in which Christmas beats Chanukah hands down), and opening the presents under the tree. My granddaughters, Jewish on my son’s side but being raised Catholic like their mom, will do all those things this year—on Boxing Day. That’s December 26, a holiday we don’t celebrate in America, but it comes in handy when the kids have three sets of grandparents. And on Christmas Day, we’ll probably follow another New York secular Jewish tradition: Chinese food for Christmas.
Posted by Elizabeth Zelvin at 3:00 AM

At the risk of being politically incorrect (or is that correct?), I'll wish you HAPPY HOLIDAYS!

Same to you, Paul. I think the generic "holidays" is considered "correct," but even when I share its opinions, I don't let the thought police choose my vocabulary.

I had a friend who had a Hanukkah bush growing up, but she also was the only one of our friends who didn't go to Hebrew School.

And yes, Chinese food on Christmas is a wonderful tradition. I just wish I could find really good Chinese food down here in DC like we had in NY growing up. Cute video, btw.

Happy Hanukkah, Liz, and - I guess - Merry Christmas, too.

Since these are "created " holidays, the spirit and pleasure is what matters. So have a wonderful holiday season, everyone!

And happy holidays to you too, Lil. :)