Focus and Be Happy: What Concentration Does for the Mind (And the Soul) 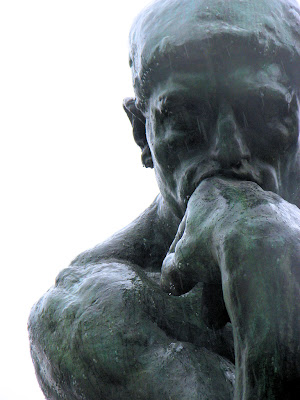 People spend almost fifty percent of their time thinking about something other than what they're doing, according to this article in Science Daily. In addition, the magazine reports that the less people focus on the tasks at hand, the less happy they are. The study's conclusion: a wandering mind is not a happy one.

How might this experiment be skewed by a group of writers? Their minds undoubtedly wander a great deal of the time, but those minds are immersed in the act of creation. Is that the same thing as daydreaming or lacking concentration?

The study suggests that the only act which receives a person's full attention is the act of making love (although don't many people say that they enjoy fantasizing during sex?)

The notion that we would be happier if we focused on our tasks is an interesting one. It backs up Camus' existential idea that one need only embrace immediate needs and desires because nothing else ultimately matters.

In an age of multitasking, we have apparently trained ourselves to do our many tasks without giving them much thought. Perhaps by reclaiming our thoughts we can improve the quality of our thinking--but this is where science meets philosophy.
Posted by Julia Buckley at 12:00 AM

In the Sixties (which surely lasted at least till 1971), we were admonished to "be here now." Today's cell phone users are anywhere but here and now, even when crossing the street or minding their young children (or both). I bet that brings the distracted figures way up beyond 50 percent. The paradox for writers is that sure, we need that floating mind time--but if we never focus enough to observe anything, what will we have to write about?

It is a dilemma. By the way, I think this premise of being in the present is currently what is selling zillions of books for Eckhart Tolle. :)

Living life in the moment is an ideal that very few accomplish and I'm sure the guru's who do get there, spent many years working at it. It's a discipline that I'm is a 100% payoff but I'm still working on it.

And Liz, my husband always says the 60s actually happened in the 70s. But I suspect that's probably a function of his own age, as he was still a teenager 1970!

Good point, Leslie. I think it can be done with practice. :)