How Many Is Too Many?

Recently I read, back to back, two books that incorporated multiple characters.  I don't mean a handful, but literally dozens of people, who played varying roles in the story.  I thought in one case it worked well; in the other, not so much.  And I've been trying to figure out why.

These are both cozies, by writers who have written other books in the same series.  I've read the other books, and I know and like both authors.  I'm not going to name names, because I'm not promoting or slamming either author.  I just want to come to terms in my own mind why one treatment was more successful than the other.

Cozies by definition take place within a closed community, which means that the villain can't be a stranger who wanders into town and commits a crime, unless that stranger is one of the existing character's Uncle Fred or Aunt Tillie, come back after plastic surgery to reclaim the stolen inheritance.  The rules say there has to be a connection to the town, however obscure, because how else can the protagonist talk to people in town and gather clues?

What size is a small town?  Two hundred people?  Two thousand?  And how many of those people does the protagonist know by name, or know well enough to call by his or her first name?  I haven't done any scientific analysis, but I'd guess the pool may be, oh, twenty people?  And generally, in a series, these people are introduced gradually, a few per book, and they'll return in future books in the series so the reader can get to know them and remember them.  If you the writer are lucky, your readers will contact you and ask, "when will we see So-and-So again?"  Which tells you that you've created a memorable and likeable character.

So what went right and wrong in the two books I mentioned?  That's what I'm puzzling over.

--Was the cast of dozens organic and relevant to the plot (i.e., did those people have a reason to be there)?  Yes, in both cases.  In one, it was an unusual situation, but logical; in the other, it was small-town business as usual.

--Did the characters have enough "face time" for us to get to know them?  Not so clear.  I don't know if there's a standard for word count to establish personality, but in one book the characters distinguished themselves quickly--their own identities, and their relationships to each other. In the other book, there were a lot of people who popped up now and then, and usually the first time they were accompanied by a tag-line explaining them ("Suzie, my former best friend from high school, who had been going through a rough patch with her third husband and was currently living off handouts from her redneck relatives").  The latter smacks of the dreaded "telling, not showing."

I'll be the first to admit that it's not easy to throw in a new character without adding an explanation.  It's a challenge to give them a real personality with only a few lines of dialogue and some brief indications of body language.  Sure, you can use some description occasionally, but if you add it to each new character, it quickly becomes repetitive and throws you right out of the story.

Back in the golden age (whenever that was), mysteries, particularly British ones, used to include casts of characters right up front, along with maps of the small town and diagrams of the manor house where all the action takes place.  The character list was often quite detailed:  "Sophronia Everlast, the maiden aunt of Hector Pumphrey, lord of the manor;" or "Tilly, the second chambermaid for the South Wing."  It seems quaint now, but if you were reading the book intermittently and managed to forget who was who, it was nice to have a reference handy.

I don't think readers' attention span has improved.  Nowadays we're used to quick snapshots of information, and we're often doing two or three things at once.  We're not necessarily as able to focus and concentrate on a book, much less keep track of who's who.

Does that mean we the writers have to dumb down our stories?  Limit the number of cast members?  I hope not.  But we do have to be careful not to overload the cast.  Okay, the shopkeeper down the street is a lovely person, but couldn't that important clue be delivered by someone else we've already met?

I'd hate to reduce writing in any genre to a formula, but how many characters in a book is too many? 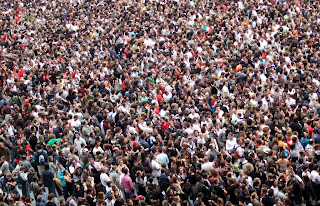 I tend to use a lot of characters. Regardless of my intention when I start writing, the cast grows and grows. A couple of people told me that Disturbing the Dead should have a list of characters in the front, the way some Russian novels do! As long as the characters are necessary to the story and the writer can differentiate them, I don't think there's any cause for concern. But I do know readers who prefer "simple" mysteries with small casts.

I gave up War and Peace twice until I saw the Masterpiece Theater version where I could put a face on each character and also know their "patronyms." Then it was a breeze. I always liked the characters list in Agatha Christie books. You could pop back to the first page and refresh your memory. Speaking as a writer, it's important not to introduce all the characters at once! One or at most two at a time is best, and keep mentioning some detail about them until the reader knows everyone. I use a lot of characters, too. I keep an alphabetized list in order not to have Peter and Petra, as in one book, or Marlies and Marcus. Oh Dear! Make sure that names are really different.

This was especially relevant to me, since my current effort involves a bunch of people, dead and undead.

Now I'm wondering if I should include a scorecard. :)

As usual, I think what most distinguishes vivid characterization is that indefinable quality, voice. Dialogue can connect us instantly to a character, as long as there's something distinctive about what each character says and how. It's also important to show relationships. If the baker is important to the plot, don't describe him or recount his history when the protagonist walks into the bakery; have her try to talk him into throwing in an extra bagel, so we can learn more about him by seeing how he reacts. If I have to flip back more than once to remind myself who a character is, there's a good chance I won't finish the book.

Historical novels still often include a list of characters, especially when some are historical and some fictional. But some writers don't even need a list. Diana Gabaldon is a master of characterization. Her Outlander books have a cast of thousands, and I find I remember almost all of her secondary and minor characters--not just their function but what they're like--over six (or is it seven now?) fat books without any difficulty.

As a reader of many mysteries I cannot quantify too many characters, but I can say that one of the things that makes a truly great mystery for me is when there are puzzle pieces that lead to the killer, but I don't put them together until the end because they were buried in such a manner as to not be obvious. It's disappointing to figure out the killer around page 150 of a 300 page book, but it's also disappointing to get to the end then realize there was a whole plot going on that the author never let you in on. For example, you get all the way to the confession scene at end of a novel that is about a candy store and the killer turns out to be the handyman, who you have met twice and know virtually nothing about, but that's not all.... he's killing because he is a member of a fight club that you also have just learned of, which he joined after his son died, which you also are just haring about, and the victim was his son's doctor, etc. This is always disappointing because you never stood a shot at solving the puzzle, and the story unfolded in the last five pages is a lot more interesting (in most cases) then the one you actually read.

That said, I understand how hard it must be for an author to bury clues among other things without lulling the reader into the coma with details that turn out to be meaningless, so the temptation to bury clues among a crowd of characters must run high. As a reader though the truly good mysteries that I read always seem to bury the important stuff in plot, not cast, and that's what it really comes down to. When characters begin to crowd out story I am always tempted to put the book down.

Dang, I'd forgotten those Russians, where everyone had two names or more (the only thing I remember about War and Peace is the battle scenes, which taught me a lot about war). Even the English nobility confuses things, with things like "Lord Battenwood, who is called Freddie by his friends."

I agree with you, Bella Aimee. But from our side, we often think that the clues we work in are so glaringly obvious that an idiot could see them, because we're so close to the story. That's why we bury them so deep. But we have to make an effort to play fair with the reader.

On a barely related note, in my August book I've included a drawing (mine own effort), because I spent a lot of time describing a piece of embroidery, and it didn't seem right not to give readers an image to refer to.

Oh yes.... I cannot even imagine how difficult finding the exact right balance of not obvious but still visible must be for an author trying to place clues throughout a novel! Especially since you are writing to people like me who read multiple mysteries a month for years on end, and people who have just picked one up for the first time. You always seem to do it though, as do some of my other favorites, so it's possible!

Too many characters is too frustrating for me as a reader -- I tend to stop even trying to keep them straight (i.e., Judge Deborah Knott's brothers in Margaret Maron's series), which is OK unless one of the seemingly minor characters turns out to be really important.