I was going to post a piece today about stuff and why we hang on it to, but it'll still be there later (just like all my stuff).  Today I awoke to headlines that the notorious, infamous, heinous (fill in adjective of your choice) Whitey Bulger has finally been captured, after being on the run from the FBI since 1995. 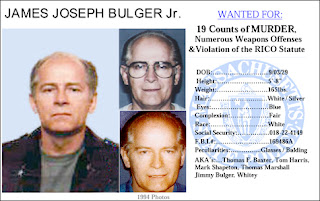 To most of the world this is no big thing, I suppose (despite his long presence on the FBI's Most Wanted List, right after Osama bin Laden, and the two million dollar reward on his head), but if you live in the Boston area, his continued absence has been in the news on and off since he disappeared.  Where's Whitey?  Is he dead?  Nope, he's alive and well, and he's been living in California with his long-time girlfriend, Catherine Grieg.

Since Monday of this week it's been all over the network news that the FBI had launched a new strategy, running ads with pictures of both of them during television programs favored by women, in case anyone had seen Catherine (the "moll") at a beauty salon or dentist's office.  Think they'll credit this campaign with the result?  (Probably not, given the timing, but maybe the ad campaign was designed to lull Whitey into a false sense of security.)

Before I say anything more, let me add for the record that I am not connected in any way to John Connolly, the Boston FBI agent who was feeding Whitey information for years, which enabled him to leave town shortly before he was to be arrested in 1995.  Connolly was convicted and did jail time for his role.

I know more than the average person about Whitey and his gang because when I was writing the Glassblowing Mysteries (as Sarah Atwell), my publisher suggested that the villains should be from the Mafia.  Having grown up in New Jersey, I thought the Mafia had been overdone, so I countered with, why not the Irish Mob?  I loved the thought of Boston bad guys trekking around the Arizona desert, completely out of their element.  In preparation for this, I read a couple of books written by some of Whitey's lieutenants (I won't name names, because I think they're all out of prison now--and doing book tours!).  Interesting if scary reading, because the authors were so completely amoral, except when it came to loyalty to their boss.  Even now I can't drive though Southie (Boston's South End, Bulger's power base) without thinking of those stories--and where the bodies were buried.

Whitey's tale also held a delicious irony:  while Whitey was one of the country's most notorious criminals, his brother William was the leader of the Massachusetts Senate, and subsequently president of the University of Massachusetts system (he admitted speaking to his brother just after Whitey blew town, but swore that he hadn't heard from him since).  Nobody has proven that Bill Bulger knew anything about Whitey's whereabouts (or his criminal activities?).

Does fiction get any better than this?  A man who has been credited with at least 20 murders, who ruled the Boston underworld with an iron hand, and then eluded FBI pursuit for years?  With a beautiful blonde companion?

Want to bet that there will be a Whitey Bulger: My Story book in the works in minutes?
Posted by Sheila Connolly at 3:00 AM

Won't be surprised if there will be one (a book by Whitey or his moll). But I won't buy it. Ditto the books written by his buddies. First, I don't reward creeps. Second, not interested even minimally.

I find it fascinating, not only that he managed to hide in plain sight for this long a time, but that suddenly they found him. I'd really like to know the story behind the arrest.

It's disturbing to think of this sort of organized, amoral mob, but even more disturbing are the tales of law enforcement officials who were just as corrupt. Where are the good guys?