Shadows of Past Lives 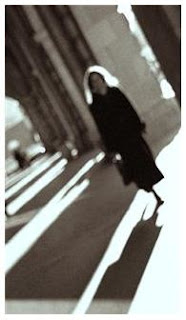 It’s a feeling most of us have experienced: I know this place. But how is that possible, when I’ve never been here before?Some people call it deja vu, a trick of the senses. Others accept it as an echo of a past life.The belief in reincarnation is common all over the world. It’s the foundation of Hinduism, Jainism, and other religions that have hundreds of millions of followers. But for many people it has nothing to do with religion. They’ve come to believe in reincarnation because they sense the shadows of past lives walking beside them through the present.The CBS morning show did a report last Sunday on a massive gathering in New York City of people eager to discover more about their past lives. The report quoted a startling statistic: one in 10 Americans believes in reincarnation. Steven Pressfield, author of a number of novels about warfare both ancient and modern, has a recurring character in his books who has been a warrior in many lives. When I interviewed Pressfield recently about his new book, The Profession, for the June issue of the International Thriller Writers newsletter, he confirmed that he believes in reincarnation and thinks he lived in ancient Greece in a previous life. I doubt Pressfield would strike anyone as a crackpot.Personally, I find one life more than enough to deal with and don’t want to root around in the past for proof of others. However... I have to admit that when I visited Scotland for the first time, I had that I've been here before feeling. I have Scottish blood (born a Grant), so I could have been experiencing a kind of genetic memory passed down through generations. This type of memory exists in other species. We usually call it instinct and shrug it off. But think about this: the monarch butterflies returning to the US this spring aren’t the same insects that migrated south in autumn. They’re several generations removed from the monarchs we saw in our gardens last year. Yet they know exactly where their forebears came from, and they know how to get here. Why shouldn’t humans – much more complex organisms than insects – also pass on memories through the generations? Isn’t that a logical explanation for the common deja vu experience?But if you feel a powerful affinity for, say, ancient Rome, if you’re sure you’ve been there, yet to your certain knowledge you don’t have a drop of Italian blood, you can’t attribute that sense of familiarity to genetically imprinted memories. Could you be “remembering” a past life?It’s an intriguing idea, one that a lot of sane people have fully embraced. And it raises questions about the very definition of life and the nature of the human soul and psyche.How do you feel about it? Do you think it’s crazy, or does reincarnation make perfect sense? Have you ever suspected that you have lived before?
Posted by Sandra Parshall at 3:00 AM

Without any sort of proof, I do believe in genetic memory. I didn't visit Massachusetts until I was well into my teens, but I was always drawn to it. Then I discovered that I had a dozen generations of ancestors who lived and died here--and I really do think they call to me.

My father's parents were both Irish-born, but I never knew them, nor did my father talk about them much. But the first time I went to Ireland, it felt like home. The best (if unflattering) analogy I came up with was that being there was like putting on a well-worn shoe--it just fit.

My mother's mother was convinced that we had all been together in at least one prior life, although she wasn't a crackpot.

So I keep an open mind.

I recently heard an Irish-American writer friend who knew nothing about her roots until she set out to find them talk about the sense of homecoming, but it was at least partly due to how much the faces all around her looked like those in her own family. I might feel the same in Israel. She felt the bond with the ancestral land. Not me. In Europe, it wasn't our land, and in Israel, let's not go there (no politics!), but it's been debatable ever since the children of Moses drove out the Canaanites. The tunnel of light experience after death (which I do believe in) would seem to support reincarnation. On the nay side is the marvelous unconscious: our dreams are utterly convincing, yet they're fabrications. For me, the jury is still out.

I love all this stuff, and want to believe it, while retaining some skepticism too. I feel quite "at home" in Paris, but not enough so to call it homecoming. I know a few people who have some psychic ability, but it's very hit and miss. The most I have is thinking the same thing as my husband, without any obvious mental spur to the thought. I usually have some paranormal element in my books, because I love it, but try to have it something the "nonsense" reader can dismiss. THe killer in the book I just finished has plenty of basic psychological stuff for his craziness, but the readers who like the paranormal are given enough to believe he was possessed.

I believe in genetic inheritance of sense memories. It's reasonable to assume that humans would also have what insects and other animals have. Undecided on reincarnation -- but hundreds of millions of people all over the world accept it as the most basic truth of their lives, so who am I to say it's not possible?

I'd like to convince you all of past lives, but my experience, which started for me when I was 18 months old is too personal and terrifying to share. Yea, I know that's copping out, but it would be too long to put into any "comments" column. There have been many examples of those who remembered their name, place of residence, and former experiences, and then researched their former selves, finding confirmation. I wish I were a skeptic. That being said, I think that our current life must be the priority. No excuses!

Intriguing topic! I've heard enough stories from people that I'm not a skeptic. And I have had experiences of feeling like I've been places that I'm visiting for the first time. Going the other direction, I'd like to think that something of mine is passed to my children and grandchildren. I'm a mixture of so many nationalities, and my children are even more, it would be hard to find where we actually 'belong!'

I 100% believe in reincarnation.

I've had too many cases of "knowing" someone I'd never met before, or feeling terrible emotions from an event that happened before I was ever born. While I agree that certain things can be attributed to genetic memory, there are scads of others that can't be explained in that way.

Perfect description of my own experience with "psychic ability," Yves: "thinking the same thing as my husband, without any obvious mental spur to the thought." Not until he says what I'm thinking aloud (or tells me he just thought the random remark I've made aloud) do I realize there's been communication, with no sense of direction or intent. But I too love the idea that it's possible. BTW, overall, my husband and I think VERY differently.

Many, many people have experienced "psychic communication" with others. There's a lot we don't know about the human brain -- the study of memory is in its infancy -- and we really know nothing about the soul or spirit. Keep an open mind, I say. You never know what might walk in. :-)

EB, I would love to hear your story.

Over a cuppa sometime, Sandy. It hits too close to home to write about. I've tried and failed. I will admit though that my parents were totally at a loss and took me to a child pyschologist--who probably thought that they were nuts! But then Mom and I had a very scary experience together. I don't think she doubted me after that.

I like to keep an open mind about everything.

One thing that did make me laugh out loud recently was watching the old movie "Bull Durham" last week, when Susan Saradon's character Annie was discussing reincarnation in the kitchen with Kevin Costner's character Crash. To paraphrase, she was going on about past lives and he wondered out loud why everyone was always someone famous in a past life--like why wasn't anyone ever just a plain Joe Shmoe?! Good point, as I've often wondered the same thing myself!

Right, Lynn -- and you have to wonder how so many different people could have been Cleopatra or Alexander the Great or whoever. Must have been crowded in there. :-)

Great topic and great comments. EB, I would also love to hear your story!

The older I get the less I feel I know about anything, and I haven't stopped pursuing an education. It's just that there's so much to know both outside and inside the self that I think we all see through very, very tiny windows.

Therefore, I too rule nothing out. The world is a magical place, and what Shakespeare called "our little life" might be much bigger than he (or we) imagined.

I really believed on past life idea, it happened to me very often, sometimes I'm confused about this things, there are instances that it seems things have happened already,

I was at school when I realized that things have already repeated so i told my friend who is standing on a chair reaching up for the Christmas Lantern to step down coz the chair will be broken, and in less than a minute it happens, and my friend was rush to the hospital for a broken leg , He did not listen to me actually..

I not only believe in reincarnation but I believe you pick your own parents (it's a 3 way agreement). We may be kin -- I'm from the Grant line in Scotland.